Riding on a rare combination of individual brilliance and great teamwork, the defending champions notch up their seventh title success 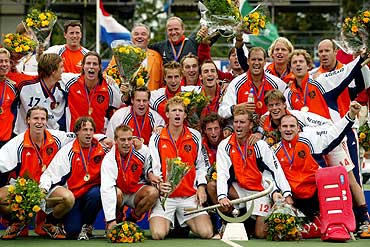 Riding on a rare combination of individual brilliance and great teamwork, Holland overcame Australia 4-2 in the final to retain the title in the 25th Champions Trophy at the Wagener Stadium in Amstelveen today.

It was the seventh Champions Trophy success for the Dutch and deservingly so for having played consistently well throughout the week-long tournament, specially after escaping certain defeat against India in their opening match when they came back from 0-3 to 4-3 in the last seven minutes.

For the Aussies, who had lost 3-5 to the Dutch in the league, a second place finish was some consolation for their lacklustre show at the Cologne edition last year where they had finished a poor fifth.

The teams sizzled with pace and power in the first-half that had plenty of goalmouth action to keep the 8,000 capacity crowd on the edge of their seats.

Both the sides opted for an open play that facilitated flowing attacks and counters.

The Dutch looked distinctly the better organised with de Nooijer, as always, prompting the home team attacks with some shrewd scheming.

The home team though enjoyed a slight edge, had to keep a sharp eye on the Aussies who were quick to pounce on the smallest of openings.

The Australians had to contend with tight marking and a solid deep defence which gave little away. Thus, they were required to work hard as the Dutch seemed to read their setplays.

So much so that the first-half witnessed quality tactical play with each team trying to outwit the other.

The Dutch seized the initiative when skipper Jeroen Delmee found Mattijs Brouwer deep in the Aussie circle. Brouwer cleverly flick the ball in, triggering massive celebrations in the stands.

Just before half-time, the pace was stepped up, and two goals materialised in the same minute. First, Victory scored off a rebound from a penalty corner, and the Dutch swiftly retaliated through Ronald Brouwer who was set up by de Nooijer at the top of the circle.

The Aussies pressed hard in the second-half, forcing several penalty corners, but success eluded them, until Elder flicked home from a penalty corner to put Australia back in the game at 2-2.

However, the genius of de Nooijer came into play as the Dutch forward went in on a solo run, along the goal-line and flicked past the goalkeeper from a near-impossible angle for what could be rated as one of the best goals of the tournament.

As if to make sure of the success, de Nooijer put through Klaver, who capped a superlative run with a delightful flick past the goalkeeper to give the Dutch a virtually unbeatable lead.

Aussies Do India A Favour