Draw Despite Flurry Of Wickets

Just 13 dismissals on the first four days, the 10 wickets today come a day too late as both sides claim their 'gains' and shift focus on the decider in Kolkata. 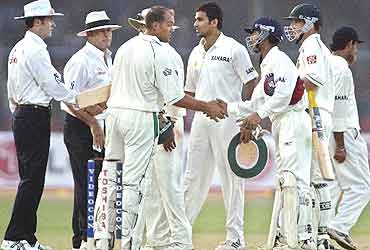 The first Test between India and South Africa expectedly ended in draw on a lifeless track which allowed the visitors to not only come out unscathed but also carry some batting confidence into the next match.

The Indians suffered a shocking batting collapse in the morning session to concede a lead of 44 runs but did manage to expose the South African batsmen's vulnerability to spin to some extent in the second innings on the fifth day track before play was called off.

Unlike Mumbai where the Test against Australia ended in just over two days earlier this month, the Green Park track turned out to be a batsman's paradise with just 13 wickets falling on the first four days and as many as 10 wickets tumbling on the last day alone.

For the record, South Africa scored 169 for four in their second innings runs in a dreary contest which would be remembered for Virender Sehwag's blistering 164.

The two teams will now travel to Kolkata for the second match of the two-Test series beginning at the historic Eden Gardens on November 28.

The slow pace of scoring by the tourists on the first two days after opting to bat first meant that a draw would be the only outcome of the match.

The lifeless track might not have amused the Indians who were looking to play on a pitch that favoured their famed spinners. After being all out for 466 in their first innings, the home team injected some life into the dreary proceedings by snaring up four South African batsmen in the extended post-lunch session.

The visitors lost three quick wickets, including captain Graeme Smith, in the span of nine overs to appear a little vulnerable but with the experienced Jacques Kallis still holding fort, there was no real danger of a complete slide.

Like in the first innings, Smith and Andrew Hall provided a solid start as they negotiated the Indian bowlers without much discomfort on a pitch which gave some assistance to the spinners in the latter half of the post-lunch session.

The opening pair put on 67 runs before Harbhajan Singh provided the breakthrough by plotting the dismissal of Hall who was caught behind by wicketkeeper Dinesh Kaarthick for 26.

Martin van Jaarsveld, who had failed in the first innings, did not survive for long as he was trapped leg before wicket by Murali Kartik in his very first over, giving the left arm spinner his first wicket in the match.

Kartik struck again two overs later by evicting Smith with a ball that turned a little bit and Gautam Gambhir took a smart catch at forward short leg, reducing the tourists to 110 for three.

Smith's knock of 47 came in 141 minutes, 100 balls and included seven boundaries. Jacques Rudolph failed for the second time falling prey to Harbhajan, who got the odd ball to jump and spin.

Earlier, the Indians lost their last six wickets for just 65 runs to be bowled out for 466 in their first innings barely half an hour before the lunch break.

Resuming at a healthy 401 for four, the Indians lost their way this morning losing four wickets in the span of just five overs before Harbhajan (17) and Zaheer Khan (30) added 36 runs for the ninth wicket.

Play began half an hour late from the scheduled 9 am start because of heavy ovenight dew but the pre-lunch session clearly belonged to the visitors who ripped through the lower order Indian batting line up.

Paceman Makhaya Ntini did bulk of the damage as he first dismissed Rahul Dravid inducing him to edge an away-going delivery to wicketkeeper Thami Tsolekile in his second over of the morning and then sent back the stylish V.V.S. Laxman (9) and Anil Kumble (9) in quick succession.

Dravid could add just two runs to his overnight tally, his 54 coming in 286 minutes and contained five hits to the boundary.

Young wicketkeeper-batsman Kaarthick joined the action after Dravid's departure but could not survive for long as he was trapped leg before by Shaun Pollock. Ntini removed Laxman and Kumble in the same over to inflict more damage to the Indian innings.

While Laxman's leg stump was knocked down with a superb delivery, Kumble paid the price for fishing outside the off stump and Tsolekile held on to a fine catch behind the stumps.

Harbhajan and Zaheer added 36 runs for the ninth wicket which took the home team closer to the South African total.

Zaheer was the more aggressive of the two as he smashed two boundaries off Pollock while Harbhajan also picked up spinner Robin Peterson for special treatment lifting him for a six.

But that turned out to be an eventful over as Harbhajan was first dropped by van Jaarsveld at the point region before he was evicted with Dippenaar taking a catch in the second attempt at silly point to give Peterson his first wicket.

Zaheer spanked Hall for two consecutive boundaries before being clean bowled, bringing an end to the Indian innings which looked headed for a bigger total before the collapse.

Ntini produced a fine spell of seam bowling to cut short the Indian run chase, having figures of 9-0-24-3 this morning and overall figures of 3-135. Hall was the other succesful bowler with 3-93.