Two words the government should have paid heed to, but didn't. Instead, it farcically spent two full days figuring out the relevant law to shut down the city -- though it still hasn't been able to find one for the malls

At my friendly neighbourhood -- decently-stocked but hole-in-the-wall -- grocer, the latest and fastest moving item on the counter is the mask. Cheap, use-and-throw variety in a bright green hue. “Rs 15 only,” says the gentleman, “It’s actually going for Rs 20 outside but for our apartment complex residents I am charging only Rs 15 a piece.”

Small reward for grocery loyalties, I guess. I promised to call if I needed some.

“You will,” he assured me, “everybody does these days.”

Masks are the latest fad in a city that changes its fads by the week, or fortnight.

Suddenly everyone is buying and storing masks of different varieties. Suddenly, people around you are talking in expert lingo about the different kinds of masks recommended to keep the H1N1 virus out of your system. Suddenly, everyone is pulling stings to acquire a “healthy supply” of the N95 mask, even at a 100 per cent premium, so that the family is safe. Suddenly, people are dialling their doctor friends and family acquaintances in select hospitals and pharmacies to “reserve” stocks of Tamiflu, if possible.

Suddenly, in less than a week, life in Mumbai is all about the flu.

“Oh, are you free of the flu?” is the latest greeting question in Mumbai.  Roads are sparsely populated, children persuaded – even bribed – to stay indoors, parents were fighting with school managements that did not shut down till Wednesday when the state government ordered all educational institutions to close for a week. Sniffling and feverish people are filling up out-patients wards in the city’s biggest public hospitals with many asking: “woh flu ka test karayein kya?”. Edgy doctors and nursing staff are losing patience with questions like “can the tulsi really help me?” Private hospitals – among the city’s best and well-known – are haggling with the government over ear-marking isolation wards and allowing access to H1N1 patients, gyms and fitness centres are offering discounts to make up for huge absences. Restaurants and bars are extending their “Happy Hours” in an attempt to lure some customers, multiplexes are offering tickets in the choicest of rows, Janmashtami celebrations including the much-awaited dahi handi programmes are severely scaled down. Most of all, BEST buses and suburban trains are running decently full, as opposed to sardine-like packed trains in normal Mumbai. 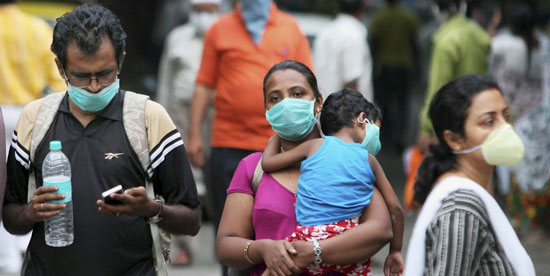 Of course, there are the masks, the appearance of at least four different varieties at pharmacies, hospital outlets, grocery stores, street corners where upstart political parties organized impromptu free distribution and asked beneficiaries to remember this during the impending assembly election, even at bus-stops. No one is hawking them in train compartments yet, but that too may not be far away.

Mumbai , simply, isn’t the city it used to be.

This is now a scared, panic-stricken, driven-to-the-edge kind of city. Many are afraid to show their fear, some laugh it off and circulate poor SMS jokes on the parallels between the H1N1 and BIWI, few are nonchalant enough to see the swine flu as “yet another common cold and flu” as a country’s leading epidemiologist remarked in this morning’s papers. As with everything else in Mumbai, H1N1 must also be endowed with a status hierarchy: Where one got the virus is now the marker of one’s social standing – was it on the family vacation in Europe or from the filth that’s irregularly lifted from outside your one-bedroom-hall flat in a poky-stinky suburb? Some fashion designer must surely be working on ideas to make the masks attractive and colourful enough to be worn to the next party that simply cannot be missed by those who picked up H1N1 on their foreign vacations. This, admiring self-appointed pundits, almost all of them non-Mumbaikars, will hold up as “yet another demonstration of Mumbai’s spirit”. Those who lost the battle to the garbage dump outside their poky flats will scamper to get their tests done, procure Tamiflu and buy the coveted masks, just so that they can go about their daily lives. This too, the pundits will testify, as the “spirit of Mumbai”.

In November last year, people say, the terror was from outside the shores of India and took the sea-route into Mumbai. In July-August this year, terror sneaked through lackadaisical airport screenings and wormed its way into our homes, schools-colleges and offices. Now, as then, the authorities were caught unawares. Preparedness was negligible. Strategy to combat the adversary was conspicuous by its absence. Emergency response from the authorities – in both instances, ironically, citizens were asked to stay indoors till it was safe to be out – laughable and thoroughly confused.

Nothing illustrates this confusion better than the series of events at the state headquarters this Tuesday and Wednesday, when Mumbai had confirmed 493 swine flu patients. It took the government two days to figure out who has the authority to shut down educational institutions, theatres and malls; under which law can the shutdown be ordered (a bureaucrat pointed out that the law was drafted in 1897 but an unclear amendment in 1990 would allow them to invoke the law); who exactly must issue these orders, and so on. Then, the hunt for the law book began, because this was a rarely used piece of document and was found buried under papers that had not been accessed for decades. Then, it was deemed best to issue the shutdown order in the name of the police commissioner of Mumbai, but the law – ancient as it stands – did not cover malls. So, schools, colleges and all other educational institutions are shut; theatres and multiplexes are shut, but malls which house many of these multiplexes are curiously open. Cut to the bone, what this means is no one in the state government still has a clue on how to order malls shut. All that deputy chief minister Chhagan Bhujbal could do was request mall owners and store owners “not to offer discounts and lure people”. Incredulous? But then, so was our police forces’ fighting Kasab & Co. with lathis. 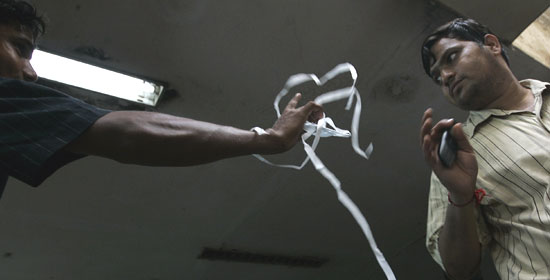 There is another, rather ironical, parallel to the terror attack. Kasturba Hospital, the government hospital that is the hub for all H1N1 cases is situated on the same road as the Arthur Road Jail where Ajmal Amir Kasab sits in solitary imprisonment and stands trial in a specially constructed courtroom. Given the enormous security concern for Kasab, traffic on the road has been blocked for the last eight months. This means, patients who come to Kasturba must, in their ill and stricken state, walk about 70 to 100 metres to the hospital gate from where they leave behind their vehicles. “Is this fair, is this the only way our government can think of,” asked an irate father, gasping from having to part-carry and part-help his 15-year-old daughter to Kasturba as she burned with 101 degree fever. The chaos and confusion inside Kasturba – brought on by the unprecedented rush of patients – is another story altogether. Little wonder that people panic. The panic is as much as contracting a new virus, as about the hopeless system that is not designed or cranked up to address this virus.

Panic is getting written into the DNA of Mumbai now. If I were an infected person, I wouldn’t know which testing centre would accommodate me, how I could find a bed in Kasturba without having to pull some strings, how safe and sanitized the isolation ward is and so on. If I were not an infected person, I would still be battling panic about the source of my possible infection, wondering if I can keep out the virus by refusing to shake hands with friends-colleagues and wearing the mask from my grocer’s, and re-scheduling appointments to reduce my time out on the streets and public places. If I were a parent of a school-going child, I would battle questions like “why are we so afraid of the flu now?” to “what do I do at home for seven days?” If I were a doctor or part of the nursing staff in any of the designated hospitals, I would constantly battle thoughts of contracting the virus myself. If I were the spouse of such doctors and nurses, I would live in a state of constant panic. Or I would look for some perspective.

Shutting down the city was a panicky government’s move, ostensibly to reduce public panic; it may not necessarily contain the spread of the virus.

A dose of perspective may be in order: on Tuesday and Wednesday that Mumbai panicked about H1N1 and battled the new virus (Wednesday Aug 12th recorded 24 new cases taking the total in the city to 143; total cases in Maharashtra 493; total cases in India 1193 of whom 589 had been discharged), nine people died of rain-related diseases including malaria. In August so far, 1730 Mumbaikars tested positive for all strains of Malaria, and approximately 70 people visited public hospitals a day for Gastro-enteritis. These are official data from the civic corporation. Given this, I should fear the falciparum or vivax mosquito more than the H1N1 virus though the latter sounds more exotic, but then malaria stopped creating panic a long time ago.

I should ask the grocer for a mosquito repellent, not the Rs 15 mask.