One is fascinated to learn a number of new things from Balbir Punj, including the dark machinations behind what had seemed like innocent buzz words. Surely it is time to remember the buzz word for another European practice? 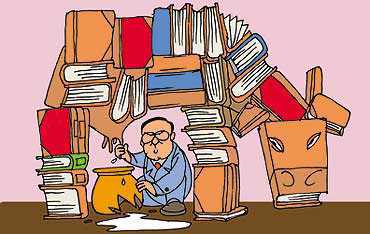 In his elegantly argued rejoinder to ‘Crisis in Hinduism’, Balbir Punj mentions that "Post Ayodhya, secularists have changed their strategy and easily invoke the well-respected icons of Hinduism to rubbish Hindutva." He goes on to say, after some wonderful quotations referring to Mohammedans and Christians, "One may disagree with what Gandhi, Vivekanand, Aurobindo and Dayanand had said but nobody can say that these were not their views".

One is puzzled. As convenor of the BJP’s think-tank (and an intellectual -- the BJP website modestly refers to it as the Intellectuals' Cell), what are his views? One sees three possibilities:

In other words, assuming that Vivekanand said  "every man going out of the Hindu pale is not only a man less, but an enemy more" - was that a good thing to say or a bad thing? And does the BJP think-tank support it or not? And is that their definition of Hindutva? What was the purpose of the quotation? One is confused.

One was also interested to learn that terms one had hitherto considered innocent, such as ‘Hindu rate of growth’ and ‘Cow Belt’, are actually part of a communist plot to undermine Hinduism.

One had no idea that the communists had supported and provided the arguments to M.A. Jinnah, thereby leading to the creation of Pakistan.

One is sorry that Gowalkar was maligned by being quoted out of context, and relieved to see that Punj is not doing the same thing to Gandhi, Dayanand, Vivekanand, Aurobindo and others. This would have been an insult to their memories.

One has now learnt that ‘exclusivism and intolerance in matters of faith are features of Semitic religions’ , and that ‘intolerance and persecution were alien to Hinduism’. Clearly, Dr Ambedkar was making a fuss about nothing.

One now understands that the INA was actually an organization based on Hindutva. History books, mostly written by leftists, can be very misleading sometimes.

One is fascinated to learn that secularism is a fundamentally European concept. One had always thought it was enshrined in the Constitution. If one questions the Constitution, how is one different from Pervez Musharraf, who has no respect for such pieces of paper?

One is asked, "Was India a heaven of communal harmony before the emergence of the RSS?". One would like to ask a simple question, based on more recent history. Is it seriously the BJP think-tank convenor’s position that communal harmony in India has improved since the day Mr Advani realized he had only two MPs and decided to roll out the chariot? Maybe he should ask a random selection of people in the street.

One is very glad to see the BJP think-tank convenor defend Gowalkar of the RSS and approvingly cite Surendra Jain, head of the Bajrang Dal as examples to support his case. From now on, one will seek the BJP view on the actions and utterances of these organisations. Mr Advani and Mr Vajpayee had been creating some confusion about whether they supported them or not. One would have liked to call them two-faced hypocrites, but one is scared of being kicked out of the Hindu fold, given some of the quotations the convenor has revealed.

Certainly, intellectual debate is required on the nature of Hinduism and the role of Islam. However, in order to do this, one requires intellectuals An organization can be known by either its words or its deeds. If the BJP think-tank convenor’s poisonous drivel is an example of the words of his party, it’s no wonder that they prefer that the deeds of an evil, murderous thug like Narendra Modi represent them.

Incidentally, since the convenor cleverly tries to rope Buddhists, Sikhs and Jains into his fold, to the exclusion of the Judaistic Christians and Muslims, it’s worth remembering that there’s a buzzword for this practice too, also of European origin. They used to call it ‘Divide and Rule’