'When I started I knew I could not compete with Shoaib in terms of speed. So I tried to become a bowler who could bowl maidens for the team and one whom every captain needs.' 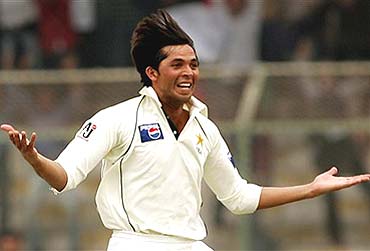 Regarded as one of Pakistan's finest bowling prospects, paceman Mohammad Asif says he is in no hurry to bring variation in his bowling as he can deceive batsmen with his lethal combination of swing and discipline.

The 23-year-old bowler said he was still learning the tricks of the trade and would like to be clubbed in the same league as the legendary Imran Khan and Wasim Akram when he finishes his career.

"I know what I am capable of doing. For me, discipline is the key. I always try to put the ball in the right areas. I have control and thankfully I have the swing. Besides, I know how to deceive a batsman," Asif said in Dharamshala.

"But I am still learning the game. And I would stick to my disciplined performance. It's too early for me to think about bringing any variation to my bowling," added the bowler who took the cricketing world by storm after a sensational debut against Australia in January last year.

The bowler from Sheikhupura said it was this pragmatic approach which had helped him to emerge as a key bowler for Pakistan.

"When I started I knew I could not compete with Shoaib Akhtar in terms of speed. So I tried to become a bowler who could bowl maidens for the team and one whom every captain needs," he said.

Asif, however, withdrew from action on the first day after taking two wickets due to a back sprain, saying he did not want to aggravate the injury, keeping an eye on the forthcoming ICC Champions Trophy tournament in India.

"It is a minor injury. But I did not want to take a risk as the Champions Trophy is round the corner," he said.

The Champions Trophy will be hosted at four venues in the country from October 7 to November 5.

Asif also said the ball tampering episode had affected the morale of the side but expressed the hope that skipper Inzamam-ul Haq would emerge unscathed from the hearing which began in London today.

"It was a one-sided decision by the umpires and they just walked out (of the Oval Test). There is no evidence of ball tampering. I am confident the hearing would conclude in our favour," said the bowler who has taken 30 wickets from six Tests.

Asif said it pleased him to see that the mofussil townships of Lahore were producing a lot of talented players of late.