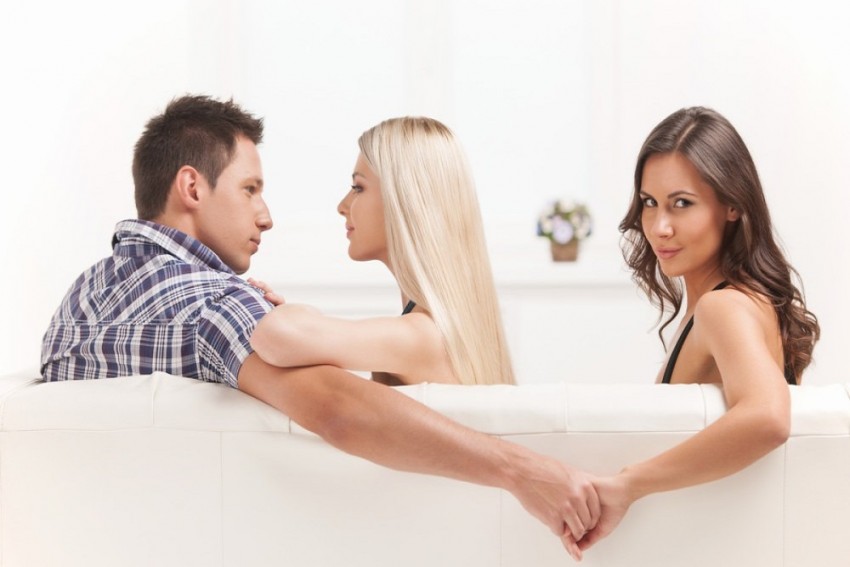 Dear Shree, my neighbor is a beautiful 26-year-old woman who leads a bohemian life. She was living with the father of her newborn for several months. But then she kicked him out and moved in with the father of her older child. She is a housewife and stays at home all the day. Recently my husband has also retired so he spends most of his day at home. Whenever my husband is outside, she comes out of her flat and talks to him. But she never comes when I am around. In the past eight possible days without a spouse home, she has come to see my husband four days. He decided to come clean to me because he didn’t feel it was right. He slipped and said a neighbor saw them in the garden and it just didn’t look good for her to be there. I then knew why he decided to be transparent. He said she told him she would like to start helping him in the garden, when I’m not there I’m sure. By the way, it’s my garden — something I love and work hard in. I don’t think she is interested in him that way, but what is now becoming an issue for me is that he doesn’t want to hurt her feelings by telling her that she doesn’t need to come over while I’m not home. I told him to at least tell her it doesn’t look proper. He said he would consider that, but he only said that after a nasty fight, which is exactly what I didn’t want to have, happened over this issue. He hinted divorce in our argument. I don’t appreciate all this unnecessary drama. He will tell her that it is I who doesn’t want her there instead of taking responsibility. It all needs to come from him.

You sound like a jealous wife who is making a way bigger deal out of this situation than it really is. Sure, your husband probably does enjoy looking at a beautiful 26-year-old woman and might even be flattered that she’s interested in his company. As for the beautiful neighbor lady: Maybe she avoids coming over when you’re around because she knows you don’t like her. You talk about your husband’s frank nature, but I have a feeling your impression of your neighbor is pretty transparent, too. You think she’s “forward,” and you’ve taken note of how she has two different baby daddies, both of whom have lived with her in recent months. But how much do you really know about her? What do you know about her struggles as a single mother or the challenges she’s faced?

It’s not really fair to take out your dislike for her on your husband or to expect HIM to be the one to tell this neighbor to stop coming over — to stop inviting you guys to her kids’ parties and asking to borrow your blender and offering to help in the garden — when YOU are the one who doesn’t want her there because you’re jealous of her and feel threatened by what you’re perceiving as your husband’s interest in her. If YOU have a problem with the neighbor lady coming over, YOU need to be the one to talk to her.

Finally, I’d suggest taking some of the focus you’re putting on this neighbor lady and re-directing it toward your husband. Retirement is a HUGE life step and he needs to know you support him — you support his interest in getting healthy and in pursuing some new hobbies. And if he’s throwing around the D-word, even casually, and you are getting in major arguments that should be a wake-up call for you about the state of your marriage.

Dear Shree, I met my current boyfriend in 2008 when I was 18. He was married at the time but going through a rocky separation from the mom of his three children. We were friends (just friends) from 2008 to May of 2013 when we decided to start dating. Through the first year of dating he was still married to this woman to avoid going through court-mandated visitation for his kids as the agreement he and his ex had was much more beneficial to him. However, I realized if there was ever to be any chance of my becoming his wife, he would need to divorce her first, so I started pushing the subject. The divorce became final mid-2015 and it seemed like things were moving along. In late June 2015, we gained custody of his three children. My life has drastically changed since then. I basically became the mother of two 8-year-old twin girls and a 7-year-old boy, at the age of 25.I have a decent job in s and can make a good living for myself; I own my own house and don’t have children of my own. Because my boyfriend still pays child support on his kids, his income is cut in half so I’m basically supporting them all. Everyone tells me I’m crazy to stick around, and that any other man would be fortunate to have someone like me, and deep down I think I know that; however, I’m scared to let him go because every other aspect of our relationship is amazing. A huge part of me, though, wonders why he hasn’t popped the question if “I’m such a good catch.”

I want my own children and my own family. I’m turning 26 in a few days and I feel like I don’t want to let my time run out just to be the stepmom of three kids and mom to none of my own. Am I wasting time?

Have you communicated with your boyfriend about your feelings? Have you discussed why he’s still paying child support when he has full custody of the kids? Have you talked about financial planning and explained that you don’t want to support this family? Have you discussed your desire to have biological children and how you would afford them on top of the three children already in the picture, let alone whether your boyfriend even wants more kids? Have you told your boyfriend you hope to be married soon and have you asked whether that’s something he wants (and with you)?

If you haven’t asked your boyfriend any of these questions, then, obviously, you need to start now. You also need to seriously consider why on earth you would want to marry someone with whom you seem to have such a lack of communication. Are you really so worried about being alone that you sacrifice as much as you have for this man who has, apparently, given you zero indication he sees a future with you?

You ask if you’re wasting your time, and I’d say that, if your desire is to have a marriage and kids of your own and you are currently involved with someone who, in at least three years, hasn’t mentioned his desire to marry you or have a kid with you, then, yeah, you probably are wasting your time. Ask your boyfriend what it is he wants (and HOW he plans to make it happen). If you don’t get a clear and direct response with some sort of timeline and a financial plan in place, please move on because right now it sounds like you’re being exploited for the support you can provide while getting very little of what you actually want in return.

Dear Shree, I am divorced with two daughters, ages 15 and 12. My partner is divorced, too, but no kids. We have been together for five years now but only see each other twice a week. He wants marriage and kids. He speaks a lot about this. The thing that worries me is we can’t sort out when he will move in with me and my girls. He gets on with my youngest but not so much my eldest as she can be quite confident and blunt. I’m surprised he still likes me with my baggage. How do you make things work when things are like this?

If your boyfriend wants marriage and kids, so much so that he talks about it a lot, why would you consider your own kids “baggage”? And why on earth would you even continue dating someone, let alone consider marrying someone, who would make you feel like your daughters are baggage? You say your boyfriend “gets on” with your younger daughter but not with the older one because the older one’s “confident” and “blunt.” Confidence is a wonderful trait! You’ve either done something right as a mother and/or are very lucky to have a 15-year-old daughter who exhibits something women twice her age struggle to find themselves.

If your boyfriend loved and accepted your daughters the way they should be loved and accepted by a potential stepfather, then “making things work” would be simple. You’d have a conversation about expectations if you moved in together and got married — like, does either of you want to try for a baby together, and how would you split costs and divide domestic duties, and what are your parenting styles and what would be your plan for parenting together as well as co-parenting with your ex-husband if he’s in the picture.