Dealing With The Syrian Refugee Crisis

Though politicians fret about the cost of refugees, the crisis is more political than economic. 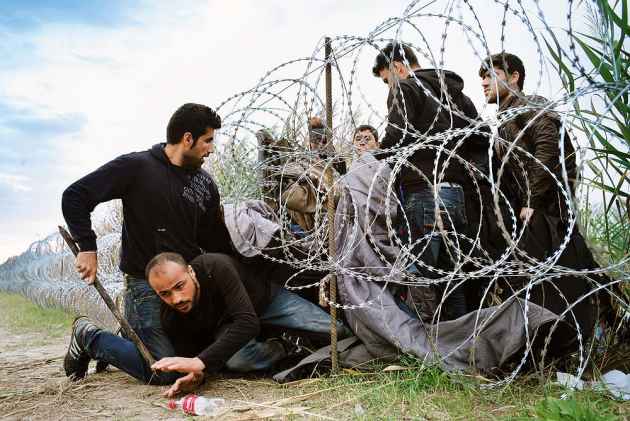 One of the great accomplishments of European integration — the passport-free movement of people across borders — is now exacerbating a crisis that threatens the core of the European project. European states are announcing tighter border members this week as the continent struggles to cope with tens of thousands of refugees, with more expected daily.

The European Union is racing to devise a solution to the crisis, the centerpiece of which is a plan by which all member countries will share the refugee burden. The crisis has illustrated broader challenges that Europe must address if it is to devise a long-term solution.

Though politicians fret about the cost of refugees, the crisis is more political than economic. Housing and feeding one or even two million refugees would cost billions of dollars but the member states of the European Union, which constitutes the world's largest economy, could easily foot the bill. The EU spends more than $50 billion per year on farm subsidies alone, and if leaders wanted, to, they could find similar sums for refugees.

Indeed, once refugees are allowed to find jobs and earn an income, their cost to society will decline rapidly. Though voters often fear that outsiders will steal their jobs or drive down their wages, much economic evidence suggests otherwise. Economist David Card, for example, collected data about Miami's labor market in 1980, after a rapid influx of Cuban refugees increased the area's labor market by a whopping 7 percent.

Crunching the numbers revealed that the refugees had little long-term effect on other workers. Unemployment did not increase nor did the increased supply of workers depress wages, even among low-skilled native workers who were ostensibly competing with the refugees for work. It turned out that businesses' demand for workers was sufficiently elastic to accommodate a rapid increase in the size of the workforce.

There is little reason to think that the refugees now seeking to enter Europe are much different than the Cubans who reached Miami. Those who succeed in the harrowing journey across the Mediterranean or Aegean are probably on average wealthier and more entrepreneurial than others from their country of origin, so they may do better upon reaching Europe. And even the largest estimates for the scale of refugee flows suggest that they will constitute a far smaller a share of Europe's labor force of more than 200 million than were Cubans in Miami.

Indeed, over the long term, Europe might greatly benefit from an influx of new workers. Many of its biggest countries, Germany above all, report low fertility rates and aging populations. On average, German women have fewer than 1.5 children. Without immigration, the population will age rapidly, putting pressure on public services — pensions above all — that are funded by current workers. And Germany is not alone. Many of the largest EU countries, including Poland, Italy and Spain, have similarly low fertility rates, and could rely on immigrants to replenish the working age labor force.

An uncontrolled influx of refugees from Syria, Eritrea, Libya and elsewhere is no one's idea of an optimal response to the economic problems posed by aging and low fertility rates. But at the very least, the potential long-term benefits to migrant inflows suggest that the crisis posed by refugees is not primarily economic. The challenge is politics. But the refugee crisis has revealed three key policy failings that the EU should address if it's to regain control over its borders.

The first is the problem of coordination. The EU faces a constant struggle to coordinate policies among its member states as demonstrated by new border controls — Germany with Austria; Austria, Slovakia and the Netherlands; and Hungary's with its fence, each contradicting EU's free movement Schengen policy. All European nations want to experience the benefits of a single-market, visa-free travel and a shared currency, but none are eager to pay the costs. Hungary, for example, is threatening to take no migrants, blocking their travel or encouraging them to leave. Europe faces the threat of free riders — those who let others enact and fund policies — in nearly every problem it confronts. Gaining unanimous support often requires long negotiations and unsavory bargains. Politicians like Hungary's Viktor Orban grandstand for domestic audiences by standing up to the EU's unpopular demands, and that makes it harder for the EU to take collective decisions.

The second challenge highlighted by the refugee crisis is in foreign policy. Europe is literally surrounded by disasters and failed states. In Ukraine, a smoldering war with Russia has destroyed the country's economy and degraded its government. The fighting has displaced well over a million people from their homes, though most have moved to other parts of Ukraine. In Turkey, the renewal of conflict between the government and the Kurdish separatist militants has destabilized the political system even as the country struggles to cope with two million refugees from neighboring Syria's civil war.

Libya, just across the Mediterranean, is also riven by a civil war raging since the 2011 revolt against former ruler Muammar Gaddafi. That war, too, has sent refugees fleeing northward. Further south, from Nigeria to Mali to Eritrea, insurgencies and government brutality have sent thousands more fleeing their lands.

Europe has failed to devise a coherent response to its ring of crises. It intervened militarily in Libya in 2011 to prevent Gaddafi's government from massacring opponents around the city of Benghazi, but then failed to help Libyans establish a functional central government after militias ousted the dictator. In Syria, the EU watched impotently as a revolt against the tyrannical government turned into a proxy struggle among regional powers and religious factions and gave rise to the barbarism of the Islamic State in Iraq and Syria. It is a mark of how dire Europe's borderlands remain that Ukraine's current semi-frozen conflict is a relative success story.

Few European politicians have even tried to formulate a coherent response. Some suggest bombing the boats owned by human traffickers who transport migrants across the Mediterranean, while others propose striking at ISIS in Syria. Neither tactic would address the root of migrant flows — the failed states that ring Europe's borders.

Developing a coherent policy toward its border regions would help Europe address the third, longer-term challenge brought forth by the current crisis. Europe not only needs a policy toward today's migrants, but also a long-term policy too. Even as Europe's native-born population declines in the coming decades, Africa's is beginning what will likely be a long boom. Nigeria alone may add 100 million people over the next generation. According to United Nations projections, Africa will account for half of world population growth through 2050.

It is unlikely that all of these people will remain in Africa, especially as European wages will be much higher. During the second half of the 20th century, most of the world's population growth occurred in Asia, thousands of miles from Europe. Over the next half century, there will be many more potential migrants much closer to Europe's borders. But with far-right parties rising across the continent on the backs of anti-immigrant sentiment, European leaders have little domestic political room for maneuver. Above all, other political issues, immigration draws voters' ire. The limitations of domestic politics may prove the deciding factor as the continent's leaders consider not only how to resolve today's crisis but also how to prevent tomorrow's.

Chris Miller is associate director of the Grand Strategy Program at Yale and a fellow at the Foreign Policy Research Institute. He is currently finishing a book manuscript on Russian-Chinese relations. Rights:Copyright © 2015 YaleGlobal and the MacMillan Center