Most of the state leaders are so focused on their own states that they are unmindful of the nation as a whole. 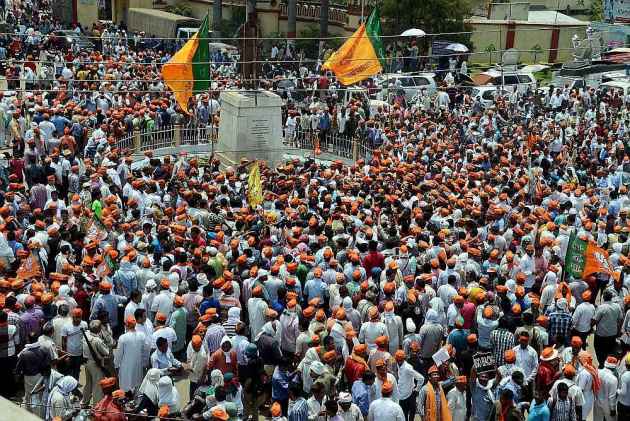 For a long time the Congress had a presence in almost all states. Pandit Nehru could have garnered much more power than he actually had; but he was keen on nourishing various parliamentary practices and traditions. To his credit, he also laid down the institutional foundation. All this started disintegrating after him. Indira Gandhi became strong after 1971 election but the Congress started losing strength as an organisation. Total domination by Indira Gandhi undermined the party. It received a massive mandate after her assassination, but it was the result of a sympathy wave.

Sadly, other parties followed the pattern set by Indira Gandhi. So it is difficult to feel assured about a vibrant political and parliamentary system. In the last four decades much has been written about the Emergency and its repercussions. But it is equally important to discuss, how other parties fared. Even a cursory glance would show that most political parties have not learnt any lesson from the Congress debacle.

Several commentators were elated by the emergence of the local leadership, which, according to them, was a successful outcome of the Mandal report. The empowerment of the other backward classes, especially in UP and Bihar, was cited. Such empowerment in the South as well as in Maharashtra and Gujrat had come about before any such report. It was a social evolution, not an outcome of legislation.

That is why, we see that in the North, the leaders are not politically entrenched. The internal split in the Congress has only increased the bankruptcy of states like Maharashtra, which other Southern states have avoided. In the North the leading parties in both UP and Bihar profess socialism. However, both states have remained backward, if not worse than before. Mulayam Singh's one point programme was and is to entrench his son firmly, while Lalu handed over power to his wife, and disintegrated his party. Although Mulayam as well as Lalu profess allegiance to Dr. Lohia, they do not have any compunction in adopting reactionary social policies.

A powerful leader does not necessarily make the party strong. This is demonstrated not only by the Congress but also by other parties. Take for instance the CPM. Late Mr. Jyoti Basu ruled for more than three decades; but after his retirement, it did not take long for his party to lose election.

In Tamil Nadu, Karunanidhi and Jayalalitha have alternatively held the reins of office. Jaylalitha would like to continue for life; and Karunidhi is eager for his son, Stalin to take over, if and when his party wins. Though the Soviet Union launched de-Stalinisation movement long ago, Karunanidhi is keen to launch a new Stalinisation process.

But because the State is regarded as a distinct cultural unit, the Shiv Sena assumes that it is functioning in the 17tt-18th century. Mamata assumes that she and her state are almost independent entities, separate from the Indian Union. Though the BJP claims that it is the only party, which is united and does not have a parochial view, the Rajasthan chief minister has threatened to form a party of her own, if any action is taken against her for alleged dealings with a controversial tycoon.

Narendra Modi is sworn in as the Prime Minister of India but on various occasions he acts as if he is the Chief Minister of Gujarat. It took some years for Indira Gandhi to concentrate too much power in her hands. But Modi lost no time in doing so. Indeed, he has surpassed her, and has divested most of his cabinet colleagues of their power.

In spite of boasting by Modi and his party chief, BJP, as a party, is weak and has no all-India presence. A political party must have a strong leader. But more importantly, it must have a proper organisation with different layers of committees and organs, sponsoring and discussing resolutions and thus making the organisation healthy. We had a national party, reaching most of the states. However, the party, that was in power, failed to build an organisation; and the party which aspires to be an alternative, is following the same pattern.

Those, who are openly or indirectly striving to bring in religion into politics, should see how such policies have made Pakistan a failed state.

Both the Centre and the state leaders are indifferent to the seriousness of the situation, which might implode anytime.