An unqualified apology by either Sonia Gandhi or Rahul for 1984 would effectively help the party move on. So why have they not done so? 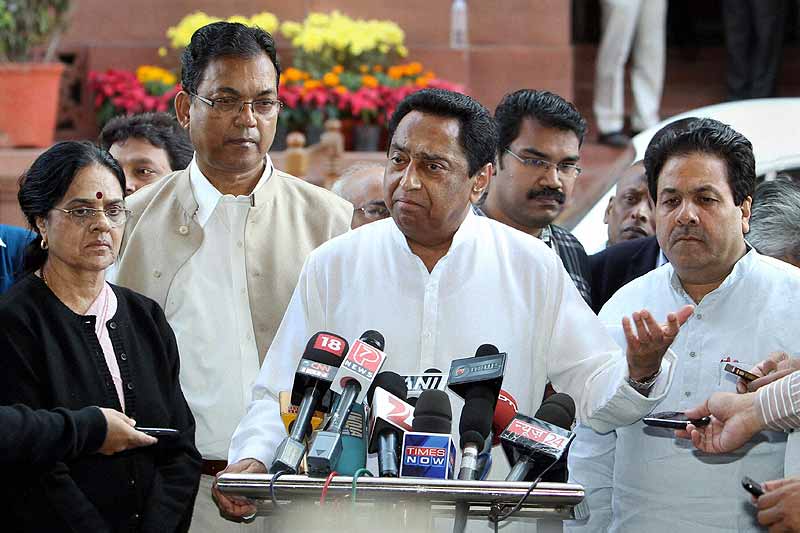 On Nov 1, 1984, some time after 2 pm, The Indian Express reporter Sanjay Suri headed to Gurdwara Rakabganj after hearing of trouble there. He found Kamal Nath heading a mob of about 4,000 while the police headed by Additional Commissioner Gautam Kaul, first cousin to Indira Gandhi, stood by. Earlier in the day the mob had burned two Sikh men to death, and their bodies still lay there burning as the sated mob made desultory attempts to enter the gurdwara.

Sanjay Suri has since in his book 1984: The Anti-Sikh Violence and After pointed out that the mob was completely under Kamal Nath's control and seemed to be composed of Congressmen. What is clear is that Kamal Nath stayed there for several hours without attempting to disperse the hostile crowd under his control. He also made no attempt to ensure that the bodies of those burnt to death were either carried away by the police, or handed over to their kin in the gurdwara. In the context of the massacres of 1984 and 2002, this was the one clear incident where a credible witness could point to the presence of a senior politician at the head of a mob of party workers at the scene of the violence.

Given this background it is difficult to imagine why the Congress appointed him the Punjab in-charge in the first place, a decision they have been forced to rescind. According to Amarinder Singh he was "appointed as party in-charge by party president…." This answer takes us to the heart of the matter. Sonia Gandhi personally took the decision overlooking his past, choosing to illustrate that the Congress is unlikely to ever be apologetic about the 1984 violence.

The violence against the Sikhs ended in the first week of November 1984 and even then it was clear to the public that at the very least a number of mid-level Congressmen had instigated and led the murderous mobs. Yet, in the run up to the general elections at the end of December, the Congress ran a divisive and communally charged campaign with the Sikhs cast as villains. It was masterminded by Rajiv's cousin and Man Friday Arun Nehru.

Barely a month after his electoral victory Rajiv gave his first interview to India Today where he said that a judicial inquiry would not "help at the moment. It would raise issues which are really dead." It was only two months later in April that such a probe was announced.

Subsequent events clearly proved that Rajiv was not interested in reviving issues which 'were already dead', rather the probe was only a bargaining tool to bring the Sikh leadership to the negotiating table.

The Supreme Court Judge appointed to carry out the probe, Ranganath Misra, had strange ideas of fairness. While the names of victims were divulged and they were cross-examined in open court, officials deposed privately behind closed doors with no cross-questioning. The media was barred, illegally, from reporting the proceedings.

This media failure to report on the proceedings explains why Congress leaders such as Amarinder Singh can claim today that Kamal Nath's name never came up before the probe. In fact newspapers had picked up his name during course of the violence and Sanjay Suri had filed an affidavit before the commission naming Kamal Nath. Kamal Nath himself in his letter to Sonia Gandhi asking to be relieved of the post stated, "Till 2005 not a single public statement, complaint or FIR was ever made against me and the first time my name was ever mentioned in any forum was 21 years later after 1984."

This is an outright lie. On Nov 3, 1984 The Statesman reported, "Policemen criticised the role of politicians too. Several councilors, they alleged, interceded on behalf of violent mobs when policemen tried to stop arson. Officers wondered what Mr. Kamal Nath was doing at Rakabganj." Sanjay Suri's affidavit, filed a few months later in 1985 was detailed and forms the basis for the facts I have set out in the initial paragraphs.

If despite the affidavit, Misra chose not to examine Kamal Nath, it says nothing about Kamal Nath's innocence but does say a lot about why Misra was eventually given a Rajya Sabha seat by the Congress. Twenty years later the Nanavati Commission finally examined the case against Kamal Nath and concluded:

Reply filed by Shri Kamal Nath is vague. He has not clearly stated at what time he went there and how long he remained there. The situation at the Gurudwara had become very grave at about 11.30 a.m. and continued to remain grave till about 3.30 p.m. The evidence discloses that Shri Kamal Nath was seen in the mob at about 2 p.m. The Police Commissioner had reached that place at about 3.30 p.m. So he was there for quite a long time. He has not stated whether he went to the Gurudwara alone or with some other persons and how he went there. He has not stated that he looked for the police or tried to contact the policemen who were posted there for ensuring that the situation remained under control. He left that place after the Commissioner of Police arrived. He has not stated that he met him. He was a senior political leader and feeling concerned about the law and order situation went to the Gurudwara and therefore it appears little strange that he left that place abruptly without even contacting the police officers who had come there. At the same time it is also required to be considered that he was called upon to give an explanation after about 20 years and probably for that reason he was not able to give more details as regards when and how he went there and what he did.

Clearly, it was not Kamal Nath's innocence, but the favour done by Misra that saved him from indictment 20 years later. In his letter to Sonia when Kamal Nath claims that "The Nananvati Commission setup by the NDA Government after proper investigation fully absolved me." It takes some gall to claim that the above counts as a full absolution.

Despite this history of his role in the 1984 massacres Kamal Nath rose rapidly within the party hierarchy and has continued to enjoy the confidence of the Gandhi family. His recent appointment as Punjab in-charge was a reaffirmation of the party's attitude about 1984. It is an attitude that explains why, despite the oft touted but false claim about Sonia Gandhi doing so, no representative has ever apologised on behalf of the Congress for its role in the violence.

This brings us to the evident question, why has the party persisted with this attitude and failed to take measures that are so clearly in its political self-interest. Letting go of Kamal Nath, Jagdish Tytler and Sajjan Kumar from the party would lose it nothing electorally. An unqualified apology by either Sonia Gandhi or Rahul on behalf of the Congress would effectively help the party move on, and it would put enormous pressure on Narendra Modi and the BJP over the 2002 violence.

There is only one possible answer that makes sense in these circumstances. In the course of recent piece for The Caravan on the 1984 massacres I had quoted Avtar Singh Gill, who was petroleum secretary in 1984. He had told me that on Nov 1, the day after Indira Gandhi's assassination, Rajiv Gandhi's associate the hotelier Lalit Suri had come to his office and told him to stay at home for three days, 'Clearance has been given by Arun Nehru for the killings in Delhi and the killings have started. The strategy is to catch Sikh youth, fling a tyre over their heads, douse them with kerosene and set them on fire.'

At that point of time, Arun Nehru enjoyed Rajiv Gandhi's complete confidence and acted on his behalf. This would indicate that the party's institutional involvement in the violence went up all the way up to the top. It is the only answer that explains the Gandhi family and the party's prevarications about 1984 massacres of the Sikhs and it is the only answer that can explain why a man like Kamal Nath was ever named the Punjab in-charge of the party.