The speaker himself broke into song on the first year anniversary of the AIADMK government in praise of amma. And not to be outdone, so did finance minister O Paneerselvam 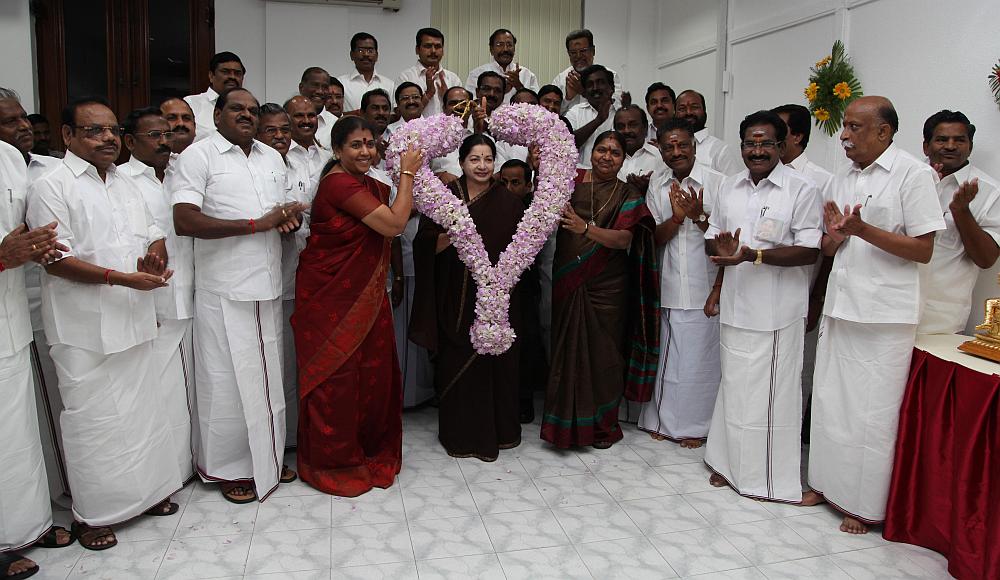 Saying it with Orchids

Move over Mayawati, Amma is here to carry on your extravagance. After spending a year keeping a tight rein on state’s finances (even so, debt has climbed up from Rs 1 lakh crore to Rs 1.35 lakh crore), rarely going out because money will be splashed around and choosing instead the video-conference route to inaugurate welfare schemes, etc, Jayalalitha let go off the purse strings when her government finished one year in office on May 16. Rs 25 crore was lavished on an ad blitz not only in newspapers here but all over the country to tom tom her schemes. Not that the BJP and the Congress, DMK, etc don’t do it. It’s just that Jayalalitha used to brag constantly about how frugal she was unlike the DMK. Well, in this aspect she has started the process of levelling the playing field. Her fawning cabinet may not have given her what Mayawati got in January 2010, a humongous garland worth Rs 5 crore in 2010 made of Rs 1000 notes. They opted for a massive garland made of orchids which the two women ministers in her cabinet – Valarmathi and Gokula Indira – put around her neck while the rest of her 33-member cabinet smiled adoringly! 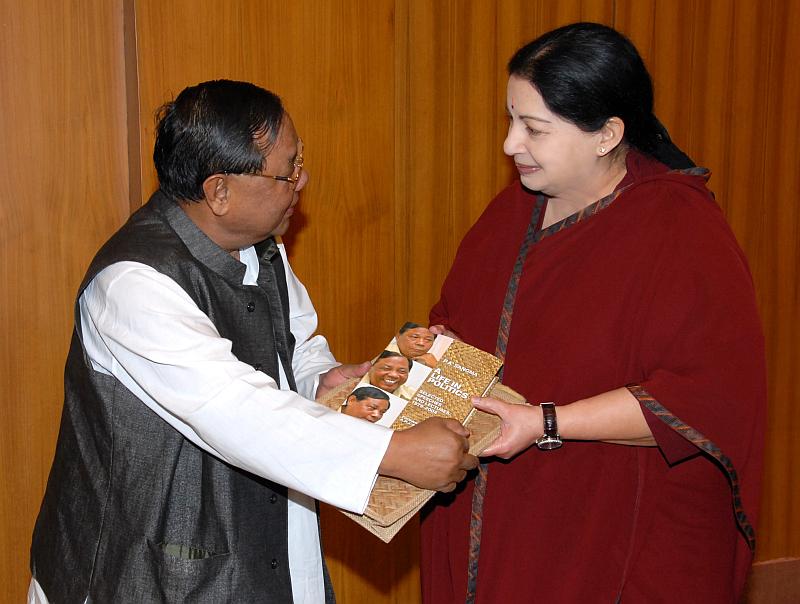 But her blitzkrieg outside TN is part of her plan to position herself as the choice for Prime Minister in 2014. Leaders from other parties consider that her say is crucial as was proved when former LS Speaker P A Sangma, who is a Presidential hopeful from the tribal quota, called on her for support this week. The point is not whether she will support him, which she later did declare, but the more important point is that he felt he should lobby with her. Interestingly, although he is neither on the NDA’s or UPA’s list of presidential hopefuls, but he met amma and did not think it was important to lobby support with DMK chief and former CM, Mr Karunanidhi. Several weeks ago BJP leader Arun Jaitley called on her using the excuse of cricket to further his party’s hope that she will go with the Hindutva party on the choice of the President. Although, amma is inclined towards the BJP and attacks the Congress fiercely every opportunity she gets, neither formation – UPA or NDA – can count her out or count her in. The BJP should remember that Jayalalitha, then opposition leader, had offered to support UPA in November 2010 if DMK withdrew protesting against the dropping of then Telecom Minister A. Raja.

But Amma still has to go a long way before she can consider herself the people’s choice because the perception is that she is corrupt, whimsical, unreliable, inaccessible and loves sycophancy.

And in the run up to her one year in office, sycophancy to her has plumbed the depths. Last week saw the labour minister Chellapandian sing over 15 songs of AIADMK founder and former CM M G Ramachandran in lieu of his reply. Of course he claimed that each song contained his reply to demands for grants from his department.

While one CPM legislator Annadurai asked for an encore, another CPM legislator Balabharathi was disapproving, wondering whether it was the assembly or a theatre. But obviously she was in minority because even Speaker Jaykumar said, “Why are you objecting? Doesn’t he have a sweet voice?”

The speaker himself broke into song on the first year anniversary of the AIADMK government in praise of amma. And not to be outdone, so did finance minister O Paneerselvam. A beaming Jayalalitha basked in all this attention!

There have been other manifestations, but there is no evidence of amma objecting although early in her term she had admonished her IT minister R B Udayakumar for not wearing footwear ("because I cannot wear chappals before a deity”). It’s another matter she dropped him soon afterwards.

Her Pack of Cards

Former VCK MLA Ravikumar says her frequent cabinet reshuffles (there have been six till January) and her constant moving of bureaucrats have been detrimental to continuity. The other effect it has had is that ministers, constantly insecure that they will be axed any day, indulge in amassing wealth fast. So, while she has worked at bringing the state out of the debt trap taking unpopular but necessary (most agree) decisions like raising power tariff, bus fare and milk prices, most of her ministers prefer being relegated to the background vis a vis the departments they handle.

At the end of the day, there might be 33 minister but only Jayalalitha counts for anything. Karunanidhi pointed out that the CM made 36 suo moto statements under Rule 110, while her cabinet colleagues made none! Karunanidhi, labelled her one year as CM as “one year of hardship”. His party has been most affected with 34,703 complaints of land grab received by the special cell she set up against DMK leaders and partymen. Jayalalitha has claimed that 1317.15 acres worth Rs 750 crore have been recovered and restored to rightful owners.

The last year has been miserable for Karunanidhi for other reasons too. His daughter, Kanimozhi was in jail and only got bail in November. Raja, came out this week after 15 months in jail after being arrested for his alleged involvement in the 2G scam. Delhi got a taste of the veneration leaders get in TN.

The One that Got Away

AIADMP MP V Maitreyan cribbed this week that at a photo session to mark the 60th anniversary of the first session of Parliament last Sunday, front row seats were reserved only for leaders from major parties. He said that the formula was different for Lok Sabha and Rajya Sabha MPs. Thus if a party had four members in LS, it got a front row seat whereas only if a party had eight MPs in the RS, they could sit in front. In other words with AIADMK having only five RS members, he became a backbencher!

But none of the MPs from Tamil Nadu – there are 40 in LS, 18 in RS and two are nominated – remembered to see that 91-year-old T.M. Kaliannan, member of the Provisional Parliament, was invited. Kaliannan lives in Kumaramangalam village in Namakkal district, and was a member of the Provisional Parliament, which functioned till the first general election in 1952. “I had the honour of listening to tall leaders such as Dr Rajendra Prasad, Jawaharlal Nehru, Sardar Patel, Shyama Prasad Mukherjee, Dr B.R. Ambedkar and N Gopalaswamy Ayyangar,” he says remembering he was just 28 years old at the time.

Members of his family informed senior leaders, but he got no invitation, although he’s probably the only surviving member of the Provisional Parliament. Kaliannan became a member representing the Congress after P Subbarayan resigned on being appointed Indonesia’s Ambassador in 1949.

His political debut was in Loyola College campus politics. “In 1939, I was part of the students’ delegation which met Mahatma Gandhi at Wardha. “We went there to seek his permission to go on a strike to condemn the Vice-Chancellor for criticizing students’ involvement in politics. We even stayed there for nearly 10 days but eventually Gandhiji did not give us the nod for a strike,” he recalls.

When his tenure of the Provisonal Parliament ended, Kaliannan became an MLA representing Rasipuram in 1952 and Tiruchengode in 1957 and 1962. He became an MLC between 1973 and 1979. After a couple of electoral losses, he quit politics, and went back to his village. He spends his time reading English and Tamil newspapers, gets involved with temple activities and interacting with youth. “I encourage discussion with them on anything but politics”, he says. For someone who honed his political skills watching Gandhi, Nehru and Ambedkar, he must be disillusioned with today’s crop of politicians.