If it pays to learn a language, then this is a good time. Not everything about the pandemic has been doom and gloom. True, livelihoods have been lost, opportunities are scare and lives threatened by the COVID-19 virus, but the neo-normal has also opened up new vistas. Learning languages and building careers is a fresh opportunity across the world as businesses look for a workforce with multi-language skills.

India has been no different. With a heavy influence of Chinese businesses in Indian markets, the option to learn a language like Mandarin has created several job opportunities as Chinese companies look for translators to ensure that the right message reaches its millions of clients across the Indian sub-continent.

In a country like India, it pays to be multilingual. India has opened its doors to foreign investments and as more and more companies try to find a footing in a nation with enormous potential, language has become a crucial tool.

According to a report in India Today, job search engine Adzuna reviewed more than 250,000 job postings to find out which language helps find a higher paying job. The study conducted in 2019 analysed 10 languages and it was observed that Chinese speakers were the highest paid, earning close to 1.2 million Indian Rupees in a year. This more than double the average yearly salary in India during that period.

With COVID striking the world since March 2020 and the working confined to working from home, the need for language speakers to act as bridges between different working cultures has only increased. It has been found that the demand for Chinese speakers is growing so rapidly that there was an 80% increase in job ads requesting fluency in in the language.

There is a strong demand for learning Chinese as a language. Since the wages are higher and the job market is highly competitive during pandemic times, proficiency in the language obviously secures the best paid jobs.

There are many languages to learn in the Indian sub-continent. It is a question of picking the right one to learn and then look for opportunities. English continues to be a preferred choice because it not only enables find a job but also helps in immigration. But after Mandarin Chinese and English, French, German, Spanish and Japanese are also getting a lot of attention. 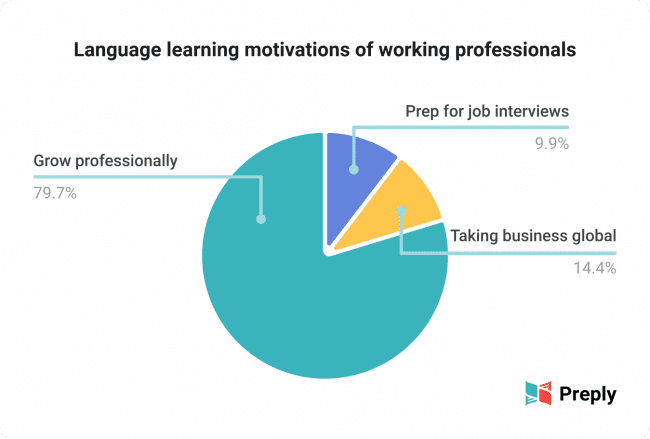 Indian students and working professionals are taking to language learning, as they use the downtime to upskill. The Indo-French cultural hub Alliance Française de Delhi, has taken its classrooms online during lockdown by enabling as many as 30,000 people in the age group of 16-25 years to learn French online from home, and turn a crisis into a promising opportunity, writes a news wire service in India.

"French language is becoming more and more trendy in the new generation. Young Indians want to take advantage of all the opportunities coming from the continuous economic growth in India. French language is a plus on the job market place. Many students have a clear objective before joining the Alliance Françaises. They want to study or work in France, work for francophone companies or even multinationals who look for French speaking candidates who have reached a high level of French, is proof of their seriousness," Guillaume Grangeon, Academic Director, Alliance Française de Delhi, has been quoted as saying.

Remote work is democratizing opportunities across the globe. People can now work for a company seas apart, and from their own bedroom. Spotify became one of the most recent companies to hit the news after adopting a “work from anywhere” approach, in what has been the biggest shift in working conditions in modern history.

As internationalisation ramps up, accelerated by events like COVID-19, language skills are growing in demand. Multilingualism opens up more opportunities for professionals, as businesses access broader markets.

Businesses rely on intercultural communication to form international partnerships, to serve customers overseas, and to help their employees progress. The United States is a case in point, according to a report in Preply.

Simply put, if you know multiple languages, your skills are in demand. In 2019, The Language Educator found that almost one in four U.S. employers acknowledged that they had either lost — or been unable to pursue — business opportunities, because their workforce lacked foreign language skills.

A multilingual, diverse workforce can help businesses close the gap between current customers and potential clients. The same Language Educator report researched how U.S. businesses needed multilingual employees to stay competitive. Nine out of ten employers said that they rely on their workforce to have language skills other than English. The majority (56%) also felt that the foreign language needs have increased over the past 5 years, and will continue to do so. 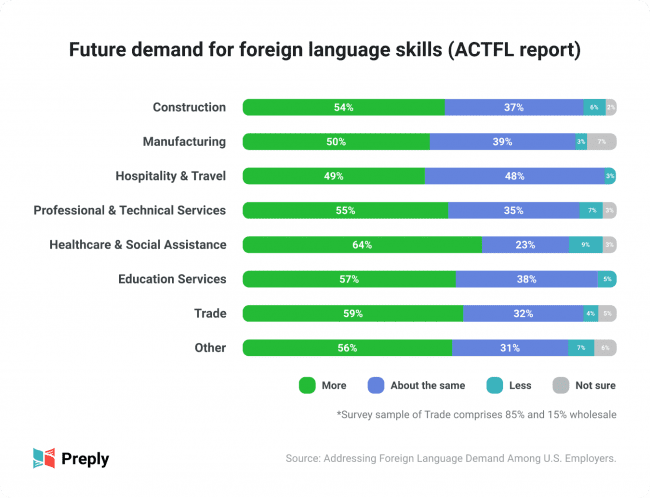 Essential services such as healthcare, professional services, and construction predict that they will rely more heavily on multilingual professionals for years to come.

It’s not just U.S. businesses who are feeling a language deficit. All the way back in 2014, a CBI/Pearson Education survey found an alarming shortage in foreign language speakers in the UK. The report argued that languages were likely to continue to grow in importance “as ambitious firms look to break into new, fast-growing markets”.

Since then, the British Academy estimated that the cost of the U.K.’s lack of languages was 3.5% of the country’s GDP. Because of that, the Academy states that language learning is vital to the pandemic recovery.

With increasingly internationalized businesses and the rising need for languages, the number of apps, platforms and online resources grew with it. And when COVID-19 lockdowns began in March 2020, the amount of people looking to learn a language through these tools exploded.

The pandemic was a match that lit the fire for language learning. But why?