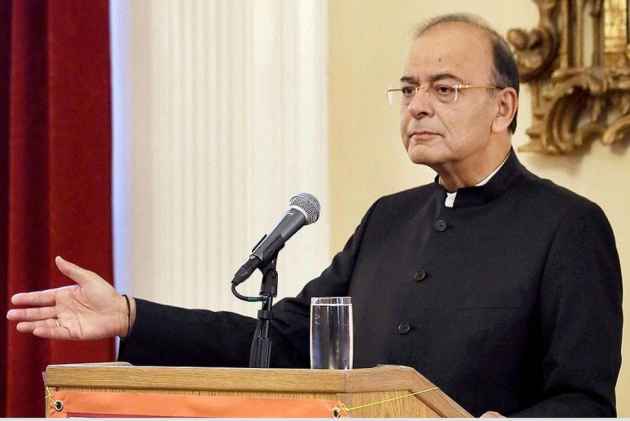 To thwart the Opposition's anti- demonetisation plans, the Bharatiya Janata Party (BJP) will began a campaign to build public opinion in support of Centre's anti-black money step till November 8, the first anniversary of demonetisation.

"From today to November 8, the BJP will develop public opinion in support of the government's anti-black money steps," Union Finance Minister Arun Jaitley said, while addressing a press conference here.

"On November 8, Union Ministers, national office bearers of the Bharatiya Janata Party (BJP), state BJP leaders will take part in anti-black money day celebrations across the country and highlight the steps taken by the government in the direction to fight black money menace," Jaitley said.

The finance minister also said that the National Democratic Alliance Government's policy has been to take steps towards ending or mitigating the black money economy in the country.

Briefing the media about BJP led NDA government's steps to fight black money, Jaitley said, "When the NDA government assumed power, the first decision it took was to constitute the SIT (Special Investigation Team) on black money on the 2011 order of the Supreme Court of India, which was not followed till May 2014."

He further added: "As per the recommendations of the SIT, we amended many laws. We offered a scheme to let people disclose their black money stashed outside the country by paying 60 percent tax and penalty. We enacted a law with a provision of imprisonment up to 10 years for those who didn't disclose their black money. The government also initiated proceedings against all who had parked blacked money in overseas bank accounts with HSBC, and other banks."

The Finance Minister informed that India also took initiative at the international level by raising the black money issue at G-20 and entered into bilateral agreements with many countries so that India could get real time information on black money.

"We even entered into an agreement with economy like Switzerland. All double tax avoidance agreements with countries like Mauritius, Singapore, Cyprus were reworked, which were pending 1996, to avoid round tripping of money," he said.

"After this, the demonetisation was a very big step to make India less cash nation. Its main three objectives were: to squeeze cash currency in country, to promote digitized commercial transactions, to expand country's tax base. The government took positive steps to achieve these objectives," the finance minister said.

He also asserted that after the implementation of the Goods and Services Tax (GST), a new transition phase is going on and after that cash generation would become difficult.

The Opposition has decided to observe November 8 as ''black day".

Leader of Opposition in the Rajya Sabha Ghulam Nabi Azad told the media here, "Possibly, this is the first time that a decision announced by the Prime Minister had to be changed 135 times. It just shows how ill-conceived it was."

Azad was speaking in the presence of Janata Dal (United) leader Sharad Yadav and Trinamool Congress leader Derek O. Brien, besides others.

He claimed that 18 parties would be protesting in their own respective ways in all states.

O'Brien described demonetisation as a "big scam" and added that TMC leader and West Bengal Chief Minister Mamata Banerjee was the first leader to point this out.

On Monday, the opposition formed a coordination committee and met for the first time in parliament.