Where is Ketan Parekh? Massive manhunt for the missing Bombay Big Bull. PMO men in UTI scam? Intellectuals in Agra? End of Enron? What does Mamata want? Questions, questions ... 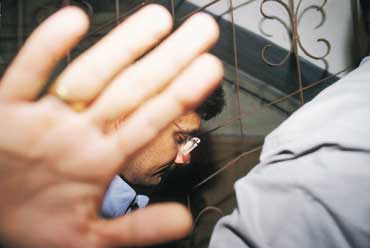 Where is Ketan Parekh? Highly placed sources in the Central Bureau of Investigation (CBI) confirm that the the "Big Bull" has gone underground and is not available at his swanky flat in downtown Mumbai. The CBI sleuths, who reached Parekh's home following reports of his Swiss Bank accounts, were told curtly by his family members that Parekh had gone on a long pilgrimage. The officers panicked, more so because Parekh was under orders from the court not to leave Mumbai. The officers then called the CBI chief who, in turn, contacted both Finance Minister Yashwant Sinha and Home Minister Lal Krishna Advani and informed the duo of the situation. A massive manhunt has been launched for the "Big Bull", whose recent wild run rattled the bourse with an estimated Rs 4,000 crore loss.

What is the latest on UTI and its troubled investments? Well, the buzz is that besides probing charges of UTI's alleged insider trading and mismanaged investments, there are now chances that the investigating agency would also be asked to seek help from the Singapore Government about whether deposits were made in the South-East Asian city's bank accounts by former UTI head P.S. Subramanyam's son-in-law or his associates. But this is not the end of the story. Subramanyam - who has an inlkling that he could possibly be in a mess sooner or later - has already indicated to the Finance Ministry that he has meticulously kept both tape recorded and scripted minutes of his meetings and conversations with senior bureaucrats over all questionable investments made by UTI in smalltime companies. And who were those? Two influential people (one former) from the Prime Minister's Office (PMO) and a member of the Prime Minister's family.

Why are both the Rashtriya Swayamsevak Sangh (RSS) and Vishwa Hindu Parishad (VHP) baying for the mandarins at the Ministry of External Affairs? Well, it is because of something revolving around the eventual outcome of the forthcoming Indo-Pak summit. Highly placed MEA sources admit that both VHP and RSS are upset with Prime Minister Atal Behari Vajpayee and Foreign Minister Jaswant Singh after being told that Islamabad and New Delhi are veering towards what could be construed as the first India-Pakistan Working Group on Kashmir.Now if that actually happens, then New Delhi will for the first time in history admit that Kashmir is not an internal issue but a disputed territory involving Pakistan. Sensing their concern, MEA officials told representatives of these two parties that even Islamabad would also agree that Sir Creek and Colonel Point (in the Rann of Kutch) are disputed territories. But the hawks were still not pacified and have told the MEA in clear terms that admitting Kashmir as a disputed territory involving Pakistan (and not an internal issue) would mean a virtual defeat at the summit.

Meanwhile, news about the plans for the summit continues to pour in, both from New Delhi and Agra. This is the latest, absolutely the latest. Listed on Gen. Musharraf's agenda is a meeting with intellectuals at 0800 hours at Agra's Amar Vilas. But as usual, both the MEA and PMO are in a major fix to finalise the government's version of "true intellectuals", more so because the Taj city has none.

Will the Indian Government be able to solve the Enron crisis? Sounds unlikely, especially because the visiting Enron CEO Kenneth Lay waited for nearly 30 minutes before he could meet Power Minister Suresh Prabhu and the meeting between the two lasted for less than 15 minutes. And now, the Government is faced with yet another crisis which revolves around Dhabol Phase II. Presuming everything will be on schedule and the project would require LNG shipments, the Indian Government - through a tripartite agreement - had formed Greenfield Shipping, an Dhabol Power Corporation subsidiary involving Enron, Japanese giant Mitsui and the state-owned Shipping Corporation of India (SCI). Worse, an $230 million order for a LNG tanker was placed with Japan's Mitsubushi Corporation. And now, Prabhu has been told that the tanker, Laxmi, is almost ready and will be delivered by October 1, 2001. But with no power plants around and Dhabol Phase II still on paper, mandarins in the Power Ministry are in a fix. Equally worried are lenders who funded the shipbuilding venture.

What does Mamata Banerjee want? PMO officials admit the former Railway Minister - who recently had a meeting with the Prime Minister and former Defence Minister George Fernandes - expressed her desire to get back in the Cabinet and acquire the Railway portfolio. And of course, a host of other issues including a detailed investigation on host of projects which fell flat in West Bengal. Vajpayee, who remained non-committal on most of the issues, made one clear point: Railways will remain with Nitish Kumar and Banerjee - if at all she is back in NDA - will have to contend with a relatively low-profile ministry. Didi, expectedly, was not pleased.

Ever since former Enron CEO Sanjay Bhatnagar talked of his ambitions of investing in media companies, both in India and in the United States, he has been flooded with a host of offers. The latest ones to reach his table in New York were from fairly well known persons: Karan Thapar of United Television (UTV) who wants to move lock-stock-and-barrel with all his four programmes to a new company where he will have a substantial stake and Tarun Tejpal of Tehelka.com. The last name even travelled all the way to New York for a detailed meeting. Tejpal, incidentally, also met Sabir 'Hotmail' Bhatia who declined help for investment. Bhatnagar, however, is yet to take a call on both. As for the channels' gameplan, ZeeTV wants a Pan-Asian channel focussed for NRIs and is negotiating with Raghav 'TV18' Behl for content which is strikingly similar for the one TV18 supplies for CNBC Asia. Meanwhile, Sony Entertainment Television (SET), is finalising plans for an Urdu channel and has named it Aman.

'Freeze Of US-64 To Be Scrutinised'