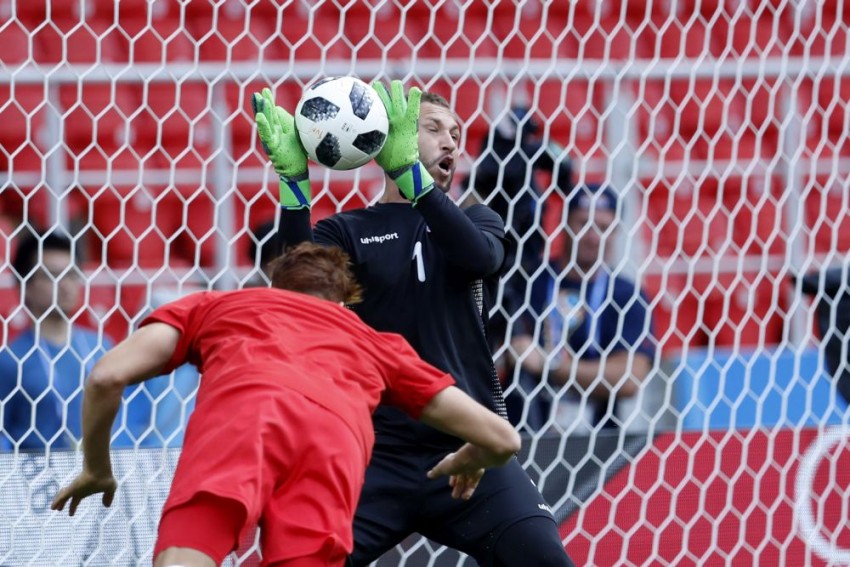 Tunisia goalkeeper Farouk Ben Mustapha makes a save during team's official training ahead of the group G match against Belgium at the Spartak Stadium in Moscow, Russia, on Sunday.
AP Photo
Outlook Web Bureau 2018-06-23T14:11:22+05:30 Belgium To Face Tunisia At World Cup Today With Eye On England 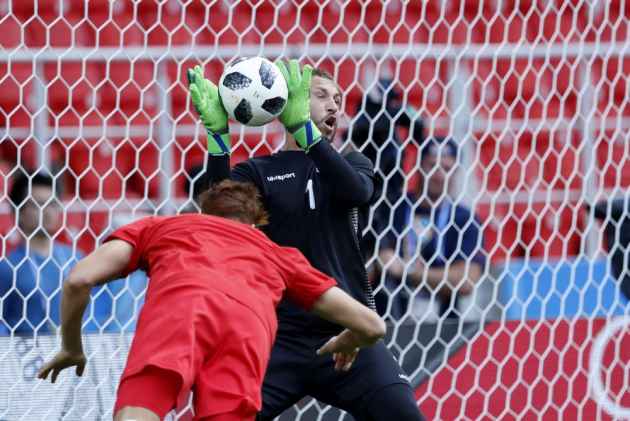 Belgium take on Tunisia on Saturday  with their eyes set on the knockout round of the World Cup but fearful that star forward Eden Hazard is set for another bruising encounter.

The Belgians want to win at the Spartak Stadium in Moscow to avoid making their final group game against England on June 28 a make-or-break qualification affair.

The Red Devils opened their account in Russia with a 3-0 win over Panama on Monday, when Romelu Lukaku netted twice, but Hazard was tightly marked and occasionally clattered by the Central American opponents.

Belgium coach Roberto Martinez hopes the Chelsea player will not get the same treatment from Tunisia.

"It is a worry that in any of those tackles he could really get hurt," said Belgium's Spanish coach.

"It doesn't worry me if that is just their way of trying to stop him."

History favours the Belgians. They are yet to lose to African opposition at a World Cup, while Tunisia have never beaten a European side at a finals.

The experienced Oussama Haddadi is set to replace Ali Maaloul at left-back in the Tunisian defence and Martinez saw plenty of danger for his team in the north Africans' opening 2-1 defeat to England.

"They have a lot of bravery and they're very dynamic," Martinez said.

"The players have a good understanding between each others and they can bring energy and intensity on counter-attacks. They play direct, efficient football."

After seeing Lukaku and Dries Martens grab the goals against Panama, Hazard wants to add some goals of his own.

Hazard, whose younger brother Thorgan is also in a squad considered to be Belgium's best for decades, is aware of the thirst for success back home.

"We knew it before the tournament. People say that Belgium would win every game but it's not that simple," said Hazard.

"We want to win, we won the first game and have another one Saturday against Tunisia. We take it game after game."

Belgium, ranked third in the world, reached the quarter-finals of Brazil 2014 and are aiming to match their previous best of reaching the semi-finals at Mexico 1986.

There was some good news for Martinez on Thursday when Barcelona centre-back Thomas Vermaelen trained for the first time in Russia.

Likewise Manchester City captain Vincent Kompany, who like Vermaelen is 32, is expected to return on Friday.

However, Tunisia will not make life easy for Belgium as they seek to provide a bright spot in a poor World Cup for African sides, with Egypt and Morocco already out.

"We lost a battle, but not the war," said Tunisian forward Fakhreddine Ben Youssef of the England game.

After their defeat to England with Harry Kane's 91st minute header, their coach Nabil Maaloul wants a focused display in their bid to shock Belgium.

"If we had got a draw it would have been an excellent result for us (against England), but hopefully this will lead to higher levels of concentration in the coming games," said Maaloul.