How do you review 26 cars at a race track? Simple, you don’t even try. Just be grateful for your dumb luck and enjoy it!

Want vs need, it’s a never ending battle we face in this horrible, horrible thing called adult-ing. When Porsche sent us an invite for the Porsche World Roadshow, I just wanted to drive some fancy cars that I could never afford, at the Buddh International Circuit, a race track that, shamefully, I’d never driven on, to post Instagram stories portraying a life I most certainly do not lead.

But as a keyboard monkey, glorified to be labelled as a motoring journalist, I need to deliver content. The event involved the first India drive and launch of the new-generation Porsche 911 (type 992), and a drive of the refreshed and yet-to-be-launched 2019 Porsche Macan among an array of cars from Porsche’s global model range. How do I review so many cars with justice? Mug up a brochure and regurgitate it as a review? Sure, a popular option these days, but not something to be proud of. And so, much like I did for my 10th grade math exam, I decided to just have fun and deal with any repercussions later. Hopefully, this story eventually turns into something worth reading.

Why Does Porsche Do This? 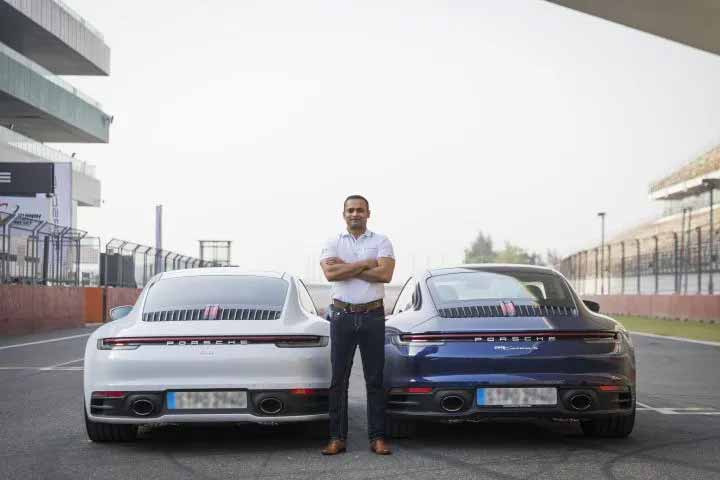 Simple, to show off! They’ve earned the right to, thanks to their meticulously engineered cars. So, why not? But also to give customers, existing and potential, a taste of what a Porsche can do. In fact, they’ve got an entire team, kit, cars (yes, 26 of them!), instructors et all that travel across the world just for the purpose of these experiential drives. This same team also hosted ZigWheels at Porsche’s race track in Leipzig, Germany. 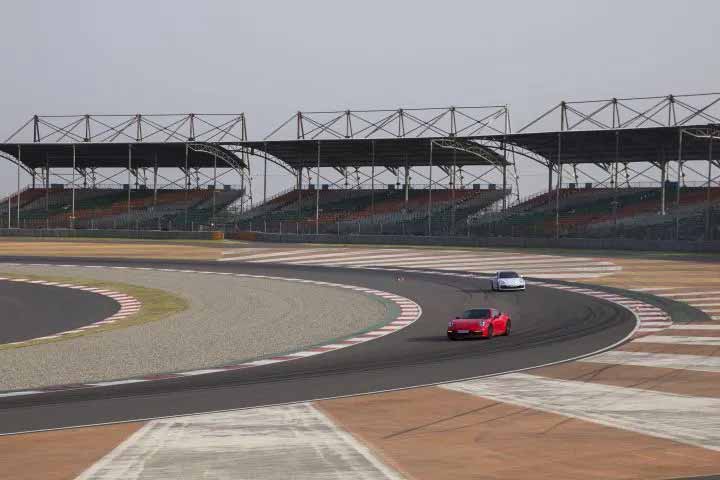 With the new 911 (8th generation since 1963) launched, driver safety briefing done with, the first hop is into the 718 Boxster GTS for a lap around the BIC. This 365PS mid-engined little car was not what I wanted to get into at first. With a convoy including a new 911 Carrera S, a new 911 Carrera 4S, a Boxster GTS and a Cayman GTS, temptation wanted me in either one of the first two.

The envy stuck as Porsche’s range toppers kept pulling away from us on the BIC’s back straight. But this sentiment was quickly muffled as we entered the hairpin corner that follows. The Boxster’s small size, nimble steering and immediate low-rev performance make it a hoot through every bend. Sure, the 911 pulls away quicker, but the 718’s feels so friendly through the corners that you can push hard through turn ins, knowing you can get it back in line with ease should you overcook it.

It’s a quick car, no doubt, but on the track it’s the balance of precision and predictability that wins you over, never taking away the sense of control even in relatively inexperienced track hands. 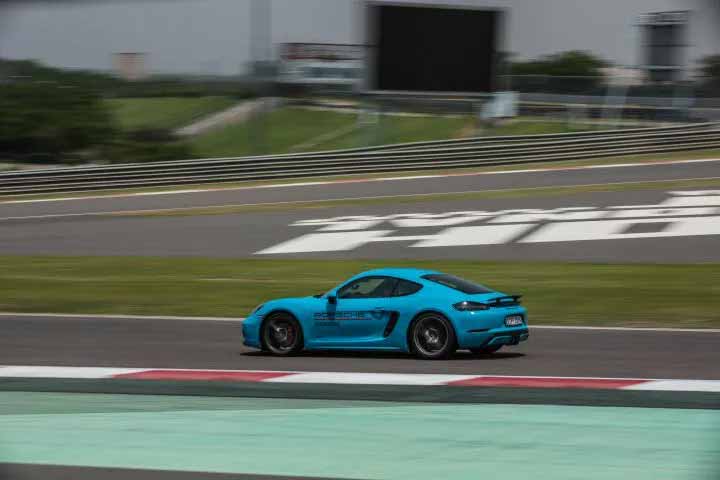 But, the boss dog just surprises you with how much more it does. A quick car swap and I’m at the helm of the 911 Carrera S. It reaches the first corner out of the pit lane with haste and shows no hesitation to keep up with the lead driver’s 911 GT3. Power is power. But it’s the 911’s logic defying behaviour that impresses the most. A rear engined car that’s this well balanced? How? The steering is laser-guided precise and if you look at the bit of the apex you want to clip, you will do exactly that. Of course, Porsche Stability Management (PSM) does a lot of the work for you. Switch it off and the tail will swing out with ease if you throttle out of a curve even a little too hard and too soon. The new 911 has better weight distribution, but the rear-engined layout makes it only too eager to oversteer. 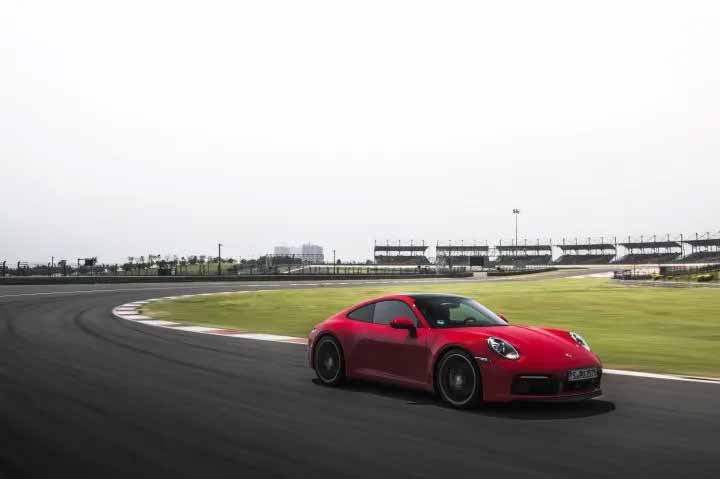 But the beauty lies in how it keeps you in line. PSM never lets the electronics act in a way that you’re aware of them engaging. Too many cars cut power rudely if you’re too hard while gassing out of sharp bends, spoiling the experience. But the 911 just modulates throttle response well enough to let you push it and be safe without censoring you. Then there’s the engine. Turbocharged, but where’s the lag? Coupled with the new 8-speed twin-clutch transmission, power delivery is immediate even in the mid-range. Enter BIC’s C10 in 3rd gear, let off the throttle to run wide, get back on the gas to cut the apex just right and there’s just no waiting for the revs to build or power to show up. It’s still daily-drive friendly as always, but morphs into an impatient track tool with just a few mm of pedal play. 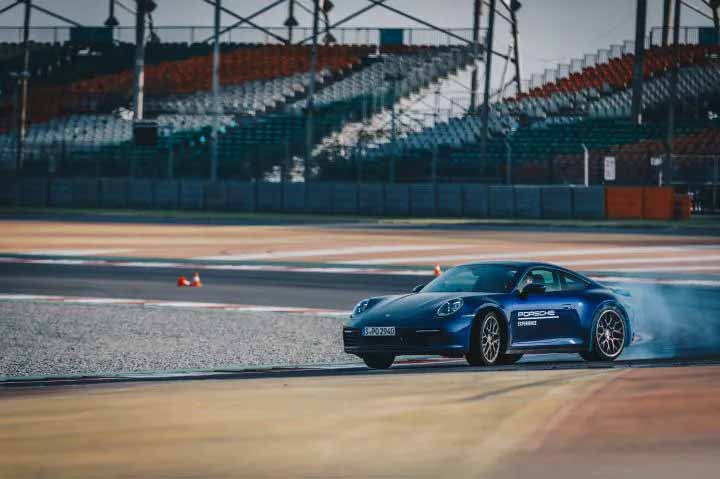 I haven’t driven the old 911, but colleagues who have, say this “feels like a different car altogether”. More responsive and a more precise handler by a significant margin even though this new car looks so similar to its predecessor, they exclaim. So, it’s a bigger, heavier car than before that feels smaller to handle? A claim, that in good faith, I can’t make just yet.

Sports cars are cool, but four doors are where the money is. So we line up to get silly with Porsche’s more real-world friendly range, albeit with one SUV we didn’t quite expect in the convoy. 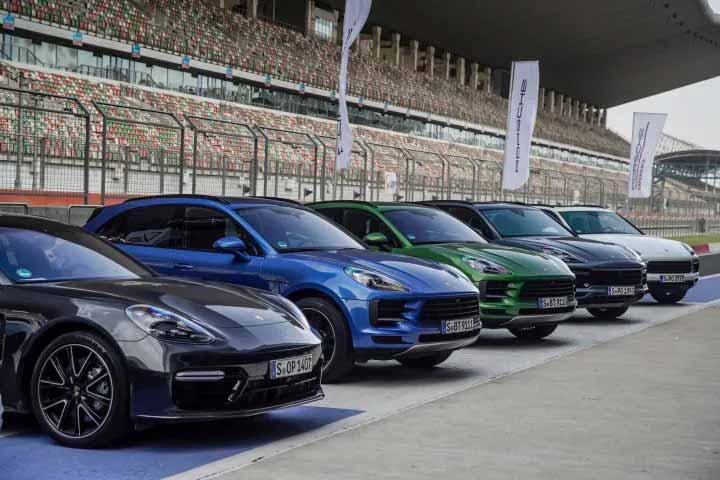 A hybrid? In an SUV?? On the race track??? Doesn’t make sense and as you’d expect from the Cayenne E-Hybrid, there’s loads of roll through corners. This is a tall and heavy SUV, some 300kg heavier than a Cayenne S courtesy its eco-friendly tech. A few scary moments where I could feel the tail sliding out, and I immediately tempered my expectations. The Porsche Cayenne E-Hybrid is far from a track tool, but is exciting. Sure, you have to take turns with less vigour and brake noticeably sooner than you would in a sports car, but that’s hardly unexpected. And on open stretches, it’s eager to go fast and doesn’t get caught off guard while speeding out of sharp bends. It’s the greener Cayenne and also a heavier member of the family but 462PS and 700Nm hardly say ‘soccer mom car’. It’s also seamless in combining electric and petrol power, so you don’t need to worry about ECU arithmetic playing spoilsport. 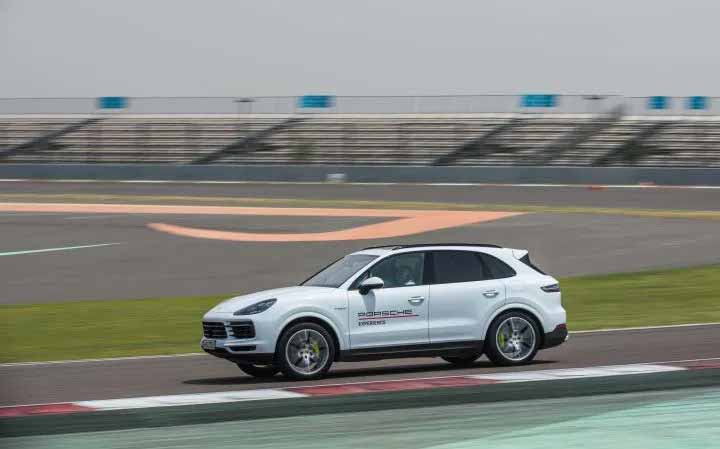 The Porsche Macan S, though, seems like something of a middle ground. Neither scary like the Cayenne through corners nor as precise as a four-door Porsche ‘car’. Performance at the track is brisk, but the biggest takeaway remains the steering. It weighs up just right as you enter chicanes and settles immediately after tight turns. But it still behaves like you’d imagine a smaller Cayenne would. The suspension is tuned for everyday roads and travels a fair bit while entering sharp curves. Inevitably, there is body roll and the performance, though sprightly, isn’t ballistic. Porsche’s baby car, no doubt, but very much an SUV. That said, compared to an F-Pace or Velar, the Macan is still better mannered by a big margin, if you want the driver’s pick. 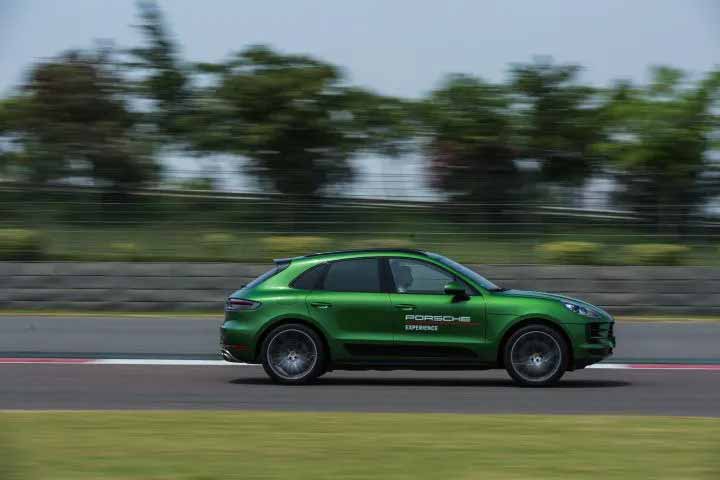 But the car that goes like stink is the Panamera GTS Sport Turismo. This 5-seat family wagon feels eerily close to the 911 to drive. You sit very low to the ground and can get a brilliant feel of the road while ferrying the family along. A little more caution while pushing out of corners, of course, but it feels like a 911 that’s had a heavy meal. And I mean that as strong praise! Rocket fast on flat out stretches, a little more wiggly at the rear through the bends than a sports car, but a marvellous blend of sense and sensational. The Porsche 911 may be the crown prince, but this just tugs at the heart and head even more. Much like the Porsche World Roadshow, the Panamera takes you through the buffet that is Porsche’s model range in one go. 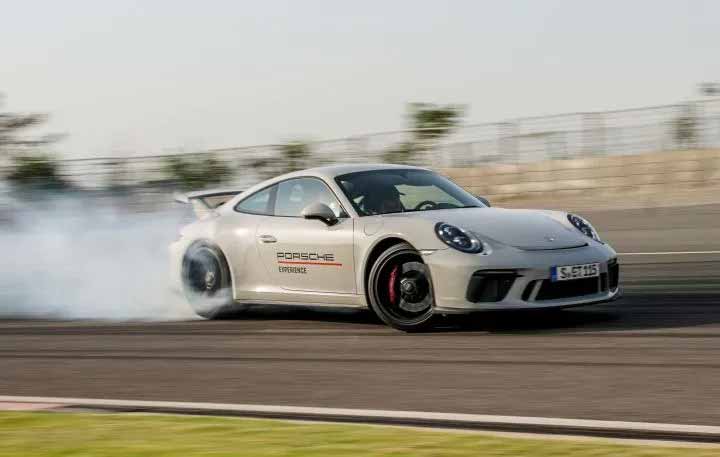 So, it’s fair to deem this event as a smart flex. Not only does it showcase Porsche’s range appropriately, but is also the right way of showing Porsche’s intent for India. An opportunity for customers to get an unfiltered experience and for us the media lot, to just let loose and not get bogged down with finicky analytics. I may have failed that latter bit.