Luxury brand Lagonda set to be revived; Vanquish nameplate to make a comeback and so much more from Aston Martin’s stand at the Geneva Motor Show

Aston Martin has unveiled a trio of concepts at the ongoing Geneva Motor Show, chief among which is the AM-RB003 mid-engined, limited production supercar and an all-electric, uber-luxurious SUV called the Lagonda All-Terrain concept. Aston Martin also revealed the company’s vision for its first series-production mid-engined supercar - the Vanquish Vision  concept. So, without further ado, let’s take a closer look at each one of them and what it means for the company and petrolheads around the world. 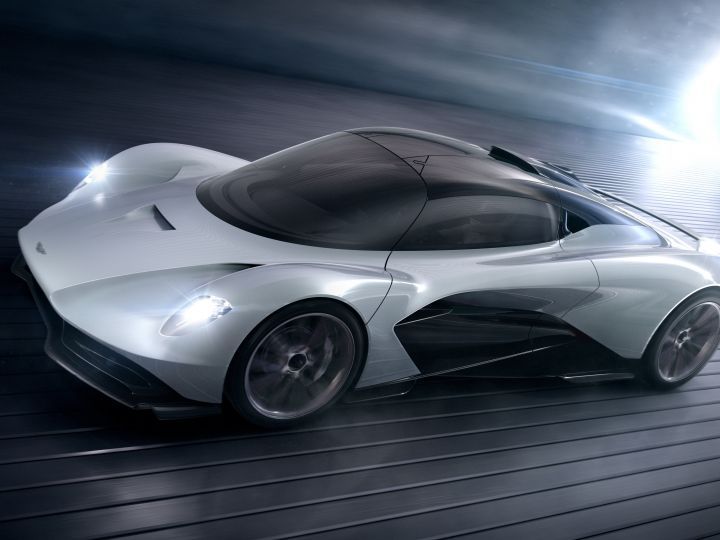 The AM-RB003 will be the third car from Aston Martin’s mid-engined family after the Valkyrie and Valkyrie Pro hypercars. It will be built in collaboration with Red Bull Advanced Technologies and will feature a new hybrid turbo-V6 engine. Like the Valkyrie, Aston says the AM-RB003 will incorporate concepts and technologies taken directly from Formula 1 to “meet and surpass the performance demands of existing top-end hypercar rivals.” The AM-RB003 will be limited to just 500 units worldwide and share “the same fundamental styling and aerodynamic philosophy with the Valkyrie.” 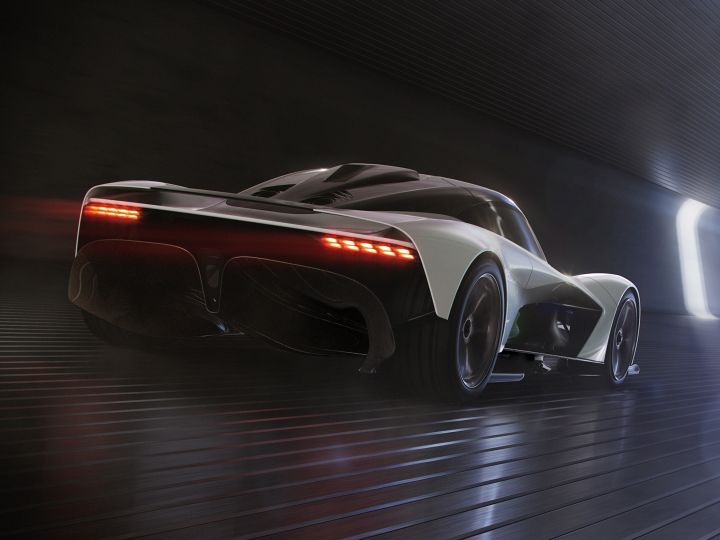 To our eyes, the AM-RB003 feels like a more polished version of the Valkyrie. As expected, the body structure and panels are made out of carbon-fibre. The front splitter looks like it’s built for the road rather than a race track, while the tail sits lower and also features a FlexFoil rear wing. The latter is a NASA-approved technology that can change the downforce without changing the angle of the wing. Aston Martin says the aerospace-derived technology does not generate any drag, turbulence or wind noise. We’re sure aerodynamic god Adrian Newey had a massive role in developing the rear wing. Finally, the AM-RB003 gets new headlamps and tail lamps to distinguish itself from its bigger brother. 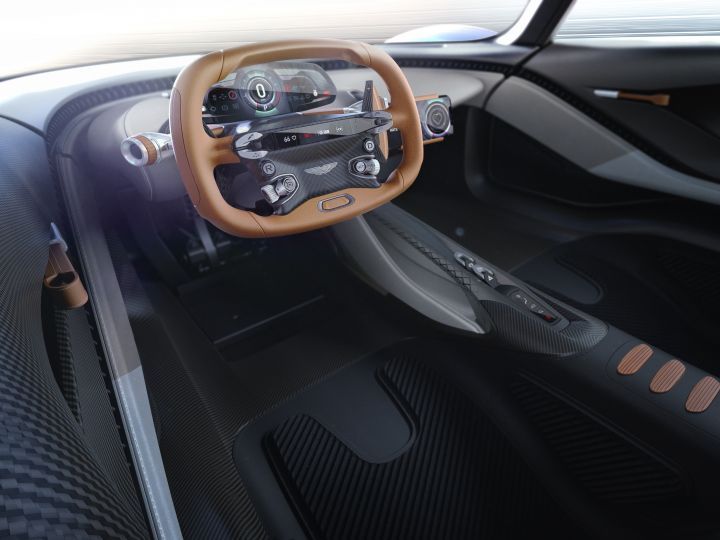 Other differences include a more spacious cockpit with LMP1-style doors for easier ingress and egress. Aston says the AM-RB003 will have more elbow room thanks to a widened and 3D-printed centre console and that it will have a shelf behind the seats to store your bags! Other highlights include a steering column-mounted digital instrument cluster for a clearer view as well as a ‘bring-your-own’ infotainment system. It is exactly what it sounds like - a smartphone holder!

The company says it will reveal the full technical details of the AM-RB003 as the development program progresses. However, it added that this mid-engined supercar will be the first to receive the all-new hybrid turbo-V6 engine developed in-house. 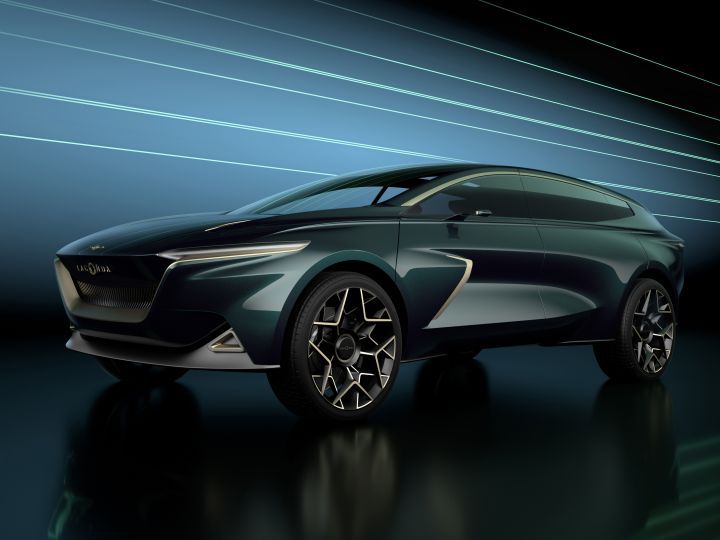 The Lagonda All-Terrain concept improves upon the design language first seen in the ‘Vision Concept’ from last year’s edition. Aston Martin has announced that Lagonda will manufacture state of the art, luxury vehicles powered by zero-emission powertrains. It plans to start production in 2022 at the company’s new state of the art facility in St. Athan in Wales. 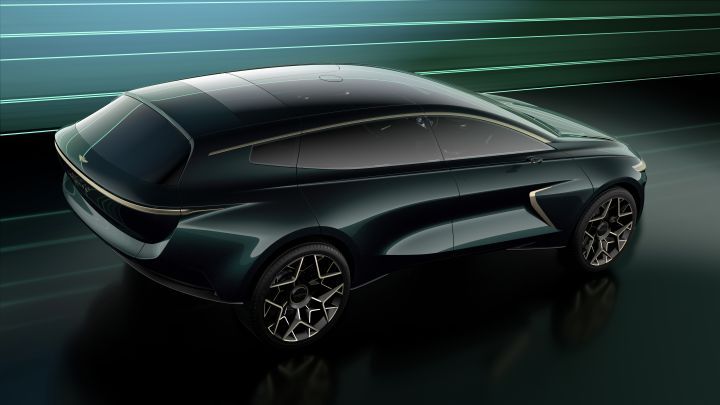 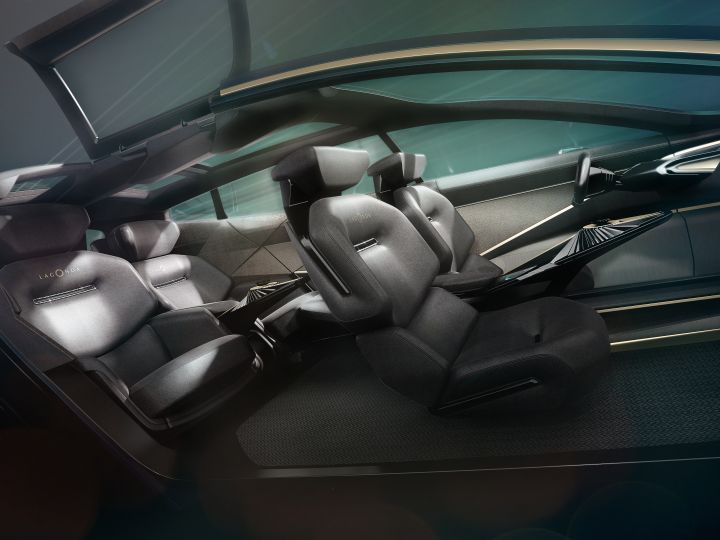 The production version of the all-electric SUV will have a luxurious interior, possibly with swivelling seats and rear-hinged doors. Aston Martin says the cabin will have the same luxurious feel as a super yacht! The steering wheel hub will be replaced by a digital gauge cluster, while the speakers, AC vents and other oddities are neatly hidden from view.

The car will pack batteries for the electric motors on the floor. Also hidden from view is a rear shelf that slides out from the floor when required. Aston Martin says it can be used as a platform for occupants to perch on and survey the landscape. How very thoughtful!

However, the pièce de résistance has to be the Lagonda All-Terrain’s floating key. Aston Martin believes that while cars these days can make do without keys, they are an important point of contact between the driver and the vehicle. Hence, the Lagonda’s keys get pride of place inside the cabin. Assisted by electromagnets, the key floats between the front seats! How cool is that?

The Vanquish Vision concept will be the company’s first-ever mid-engined series production car and the fourth after the Valkyrie, Valkyrie Pro and the AM-RB003. It previews the design language of future Aston Martin supercars and will be powered by the same hybrid turbo-V6 as the AM-RB003. Scheduled to enter production in 2022, the car will be based on a bespoke aluminium structure that should ensure lightness as well as rigidity. 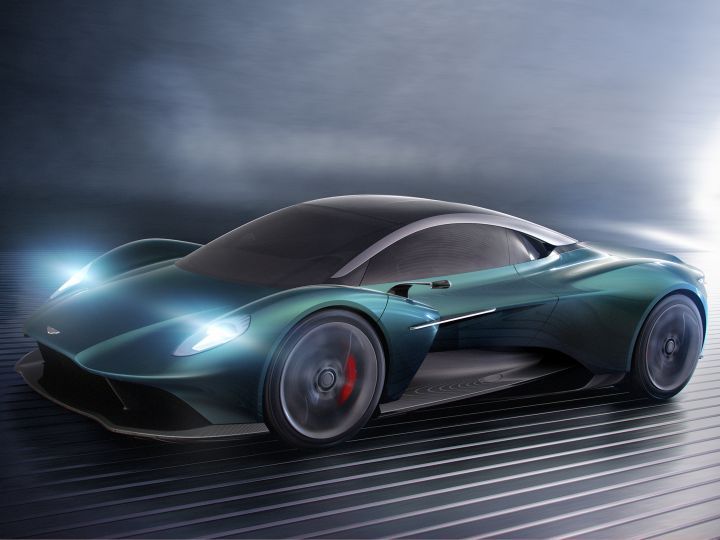 Aston Martin says the ‘Vanquish’ is a nameplate that’s so iconic that it begs to be revived. And what better way to do that than to throw it in the ring where other established supercar manufacturers like Ferrari, Lamborghini and Porsche excel in.

Like the AM-RB003 above, the Vanquish Vision concept benefits from the lessons learnt from developing the Valkyrie. Aston Martin says, “the pursuit of weight, packaging and aerodynamic efficiency informed every aspect of the design and engineering.” 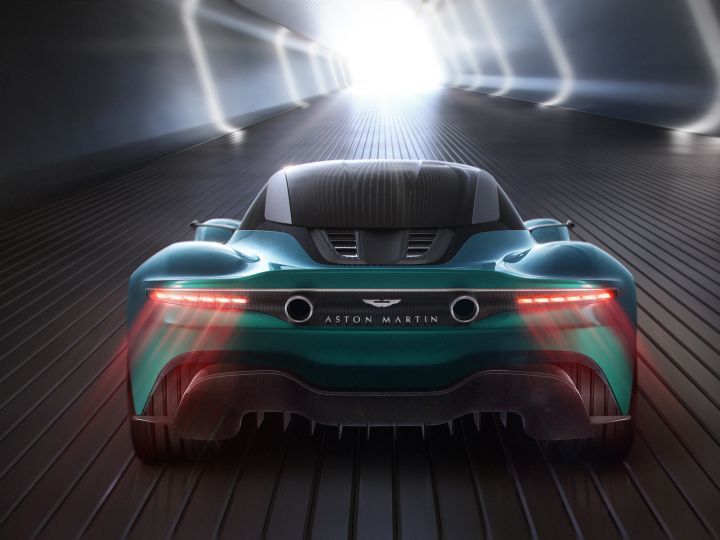 As for the design, it looks less technical than the Valkyrie and AM-RB003. Instead, it chooses a more seductive approach with its smooth flowing lines and clamshell front fender. Other design elements seem like a more polished version of what we’ve seen on the AM-RB003 and the Valkyrie. Expect the production version of the Vanquish Vision concept to feature a well-appointed interior that befits a grand tourer from Aston Martin. When launched, it will go up against the recently unveiled Ferrari F8 Tributo as well as the successor to the McLaren 720S.