The world champions rode McGrath's spell to romp into the final for the first time with a 34-run victory over the Kiwis, but not before surviving a scare from the duo of Oram and Vettori. 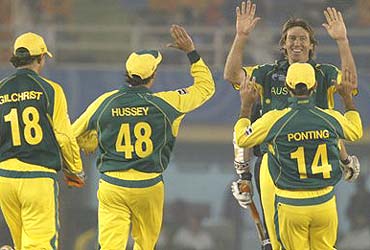 Australia romped into the final of the Champions Trophy for the first time with a hard-fought 34-run victory over a spirited New Zealand who came back from the dead to very nearly scuttle the champion team's title hunt.

After recovering from early jolts to post a respectable 240 for nine, the world champions fluctuated from the sublime to the ordinary before stopping the Kiwis at 206 with four overs to spare in what turned out to be a relatively close contest under lights at the PCA stadium in Mohali.

The Aussies, who have never won the Champions Trophy, looked like pocketing the match within 25 overs but allowed things to drift a little as their trans-Tasman rivals staged a spirited fightack through a defiant 103-run partnership between Jacob Oram (43) and Daniel Vettori (79).

Pace spearhead Glenn McGrath (3-22) did the bulk of the damage to leave the Kiwis gasping at 35 for six before Vettori and Oram not only performed the salvage job but took the chase tantalisingly close in the end.

Australia will now take on the winner of the second semi-final between South Africa and title holders West Indies in the final to be held in Mumbai on November 5.

Captain Ricky Ponting (58) and Andrew Symonds (58) were the top scorers for Australia while a useful knock by Michael Hussey (35) steered the team out of early trouble after a dramatic over by Kyle Mills saw them lose both their openers in the space of three deliveries.

Requiring to score at less than five runs an over, the New Zealand openers played out the first five overs without any damage but the innings disintegrated completely after the fall of Lou Vincent.

McGrath showed he had lost none of his wicket-taking abilities as he bowled a probing line outside the off stump to trouble all the Kiwis batsmen on a sporting track.

The lanky paceman started the Kiwi slide by first scalping Vincent with a gem of a delivery with Ponting taking the catch at second slip.

Brett Lee, who also looked equally devastating at the other end, accounted for Nathan Astle (0) to leave New Zealand tottering at 20 for two. 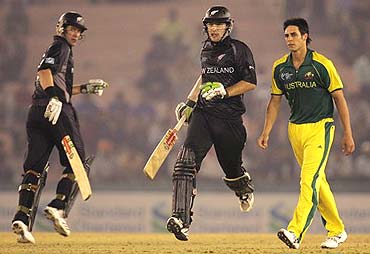 Hamish Marshall (5) and Peter Fulton (2) also fell victims to the experienced McGrath but it was the dismissal of captain Stephen Fleming (15) which was the biggest blow for the Kiwis.

Fleming edged an outgoing delivery off Nathan Bracken to Ponting at second slip and from then on, it was only a matter of time before the innings folded up.

Oram and Vettori delayed the end for some time with a 103-run partnership which helped New Zealand to surpass their lowest ODI total of 64.

Earlier, put in to bat, the Australian innings plunged into trouble straightaway with Mills snaring up the two openers Adam Gilchrist (3) and Shane Watson (0) in his second over to reduce the world champions to a precarious four for two.

Both Mills and Bond extracted a lot of movement in the early overs to trouble the batsmen with speed and swing.

Watson, who struck a half century in the crucial game against India on Sunday, was the first to return to the pavilion when he mistimed his pull and offered a catch to Fulton at the mid off region.

One ball later, Mills got rid of the dangerous Gilchrist who also mistimed his stroke to be caught at square-leg by Oram.

Both captain Ponting and the in-form Martyn, who joined forces after the early setbacks, faced a torrid time in negotiating the charged up Kiwis pacemen who worked up a good pace to beat the batsmen often.

The two experienced batsmen, however, saw through that spell and gradually got their eye in. They mixed caution with aggression to slowly bail the team out of the early mess.

After Mills and Bond had gone through their opening spells, Ponting opened up and executed some glorious shots on both sides of the wicket while Martyn was also severe on the loose deliveries.

The experienced duo stitched 66 runs for the third wicket before left arm spinner Vettori brought about Martyn's downfall, trapping the batsman leg before to leave Australia on 70 for three. Martyn's 54-ball knock of 26 contained five hits to the boundary.

Mills was brought into the attack for his second spell and the move paid immediate dividends as he removed Ponting shortly after he had notched up his 55th ODI half century. His 58 came off 80 balls and was studded with nine boundaries.

Hussey and Symonds then got a partnership going to ensure that there were no further setbacks.

The lanky Symonds was the more aggressive of the two batsmen by playing some flourishing shots and singled out Vettori for special treatment, lifting him for a mighty six.

The two brought about the 50-run partnership in just 47 balls to give some impetus to the innings in the later stages of the floodlit contest.

The 65-run partnership however came to an end soon after when Hussey (35) offered a simple catch to  Marshall at point region.