Dhoni's willingness to hit was matched in equal by his desire to stay long at the crease. Let's not forget his keeping which was equally brilliant. 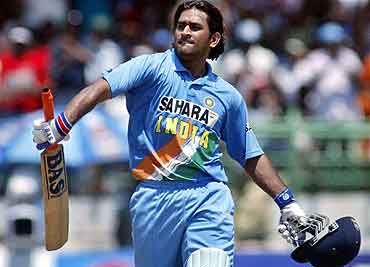 It is an ominous sign that India is scaling 350 on the board and yet quite a few of their key batsmen are out of form: Sachin Tendulkar, Saurav Ganguly, Yuvraj Singh and Mohammad Kaif have all not been amongst runs. To the largely two-faced Indian batting of Virender Sehwag and Rahul Dravid has been added the third dimension of Mahendra Singh Dhoni.

This boy won points on all counts: technique and temperament; daring and fitness. He withstood some sharp tongue-lashing from the Pakistan bowlers and then unfolded a searing range of strokeplay.

It was audacious yet judicious; his willingness to hit was matched in equal by his desire to stay long at the crease. And let's not forget his keeping which was equally brilliant: the leg-side catch; the near stumpings of Shoaib Malik and Yousuf Youhana; the low catch of Rana Naved-ul Hasan. India has unearthed a serious talent who would add balance and energy to the side.

In promoting Dhoni to number three, India seems keen to invest in future. Pakistan, on the other hand, is still carrying on with its 'life members'. It is now the eighth match in row when they have failed to find an answer to Virender Sehwag. He's smashing them at will, he could wristily flick the same delivery to the mid-wicket fence which, if his mood takes over, he is steering through the vacant third man.

Mohammad Sami, Naved and Abdul Razzaq are meat and drink to him; their threat to him is no bigger than that of a water-pistol. He's roasting them over the coals; yet the bowlers are not even seen attempting something different. They come, pay their dues, and turn up at the appointed hour in the next match to do it all over again!

Yet they are being persisted with. There is no attempt to confront Sehwag with some unknown element. Once he sets the tone and tenor of innings, on flat wickets, India brook no stopping.

It's some wonder that Ganguly and the rest haven't feasted on the pop-gun attack yet. The Indian captain was out to a straight ball, it shows when the time is bad even simple deliveries can claim your scalp. Ganguly should either take his chances from the word go or he should block and take singles till his confidence is restored. At the moment, nothing is happening.

In one-day matches in the sub-continent, in teams packed with batsmen and all-rounders, any total is possible and any target is achievable. Only teams which have discipline and bowlers who can take wickets have a future.

Pakistan need incisive bowlers. At present, nobody seems capable. Danish Kaneria is a must for the next game. So is Shahid Nazir for Sami bowling to Sehwag is beginning to look like a free lunch.

The less said about the Pakistan batting the better. Let's look at the batsmen and the manner they got out: Shahid Afridi, Salman Butt, Shoaib Malik and Mohammad Hafeez. They wouldn't be able to see their captain in the eye.

Abdul Razzaq too would avoid his captain for the latter held him responsible for his run-out. From Razzaq's point of view, he could have been unsure where the ball had gone and then Inzamam's reputation as a poor runner is always a consideration for his partners. Still, it's only basic cricket that you respond to the non-striker's call if the ball has gone behind the batting crease. Same with shots played to mid-on and mid-off. It is a striker's call and the non-striker must respond to it.

How Butt would be able to explain his dismissal when another 30 runs could have had India panting. And what explanation Pakistan has for mugging the script when the scoring rate was 7.71 runs per over at the 35-over stage?

Not that Pakistan redeemed themselves in the field. Misfields, dropped catches, missed stumping -- in conditions heavily loaded against the bowlers, even half chances are God-send. If you miss them, there's only one way to go.

Much as one is a supporter of Pakistan cricket, let's not forget that Pakistan at best only squared up the Test series. They could have lost in Mohali and Bangalore wouldn't have happened if India were not seized by a feat of stupidity. Now in the one-dayers, they have come apart at the seams. It's time for a reality check.

This Is Not Cricket!