The Statue of Unity will be open to the public from November 3. Tickets can be booked online at www.soutickets.in.

Prime Minister Narendra Modi will dedicate to the country the Statue of Unity in Kevadiya, a tribal village in Gujarat’s Narmada district, today.

The statue is built in dedication to Iron Man Sardar Vallabhbhai Patel, who served as the first home minister of independent India.

Modi reached the state capital of Gandhinagar on Tuesday night and is expected to reach the venue around 9am on Wednesday. He will lead the puja ceremony with water brought in kalash (metal pots) from 30 holy rivers, including the Ganga, Yamuna and Brahmaputra among others.

Here are some interesting facts about the Statue of Unity:

1. Built near the Narmada Dam in Gujarat, the Sardar Patel statue is double the height of the Statue of Liberty in New York.

3. There are 2 high-speed passenger elevators in the statue’s core which takes the visitors up to the chest of the statue to a viewing gallery.

4. The viewing gallery can accommodate 200 people at a time and offer an expansive view of the Sardar Sarovar Dam. 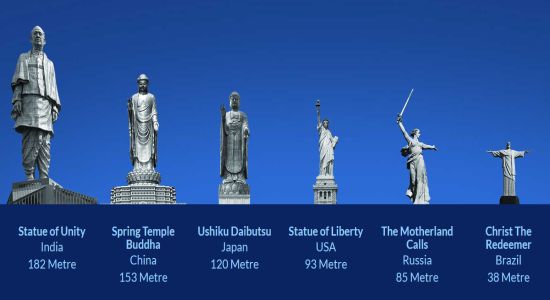 5. The statue is designed to withstand winds of almost 180km/hour and earthquakes measuring 6.5 on the Richter Scale.

6. Adjacent to the statue, the govt has built the Sreshtha Bharat Bhavan which is a 128-key, 3-star hotel facility with food service, guest amenities and conference facilities.

7. As Gujarat chief minister, Modi had announced the project in 2010 ahead of civic elections in Ahmedabad. The project, which cost Rs 3,050 crore, was fully funded by the Gujarat government.

8. The world's tallest memorial the statue of unity will be one and a half times taller than the Sardar Sarovar dam and as tall as a 60 storeyed building. 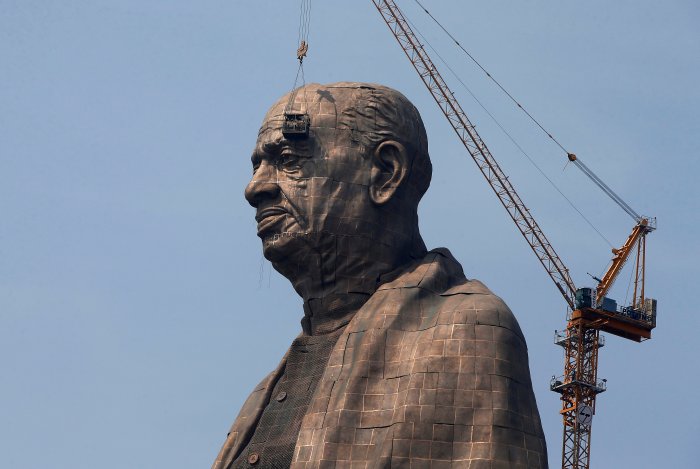 A crane lifts a piece of the bronze cladding to the head. (Image: statueofunity.in) Adjacent to the statue, the govt has built the Sreshtha Bharat Bhavan which is a 128-key, 3-star hotel facility with food service, guest amenities and conference facilities. (Image: statueofunity.in)

The statue, whose foundation was laid by Modi in 2013 as chief minister of Gujarat, will dwarf the current tallest statue, the Spring Temple Buddha in China (128m), and will be almost double the height of the Statue of Liberty in New York.