'It's a pity but people will forget the good things he did and he'll be remembered for the wrong reasons,' remarked Ian Botham. More on Cronje's Death 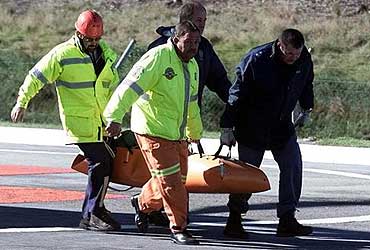 Disgraced South African cricketer Hansie Cronje, 32, was killed when a light plane in which he was a passenger crashed into a mountain in the far south of the country, Sports Ministry spokesman Graham Abrahams said in Johannesburg.

"We have heard the news, we are still trying to recover," Abrahams told the SAPA news agency. "It's a shock." Rescue workers at the scene confirmed that Cronje and the two crew of the Hawker Siddley 748 were dead.

Cronje, who was captain of the national team, and regarded as a brilliant cricketer, was forced out of the side after the match-fixing scandal in 2000.

He received a life ban from the United Cricket Board of South Africa after admitting before a commission of inquiry that he had accepted some $100,000 from Indian bookmakers and offered other players money to underperform, though he said he never threw a match.

His death brought an outpouring of tribute from South African leaders and cricketers around the world.

"South Africa will mourn him. He was certainly one of our most talented and well-known cricketers whose prowess inspired our youth to greater heights," said President Thabo Mbeki.

Said former President Nelson Mandela: "Here was a young man courageously and with dignity rebuilding his life after the setback he suffered a little while ago."

The plane, which had taken off from the central city of Bloemfontein, crashed into the rugged Outeniqua range at a height of some 1,000 metres near Cronje's home town of George.

Helicopters dropped members of the Mountain Club of South Africa's rescue service above the site so they could abseil down a crag to get to the bodies.

Frans Cronje, a cousin, said the weather was bad as the plane tried to land at George around 6:45 am (10.15 IST) and that the pilot had apparently decided to go round again.

South African cricket captain Shaun Pollock left the field of an English county cricket match in shock this afternoon after hearing that Cronje had been killed, his wife Trish told SAPA by telephone.

She said her husband was so devastated that he could not finish the game.

"He needs a few hours to recover," she said.

Bob Woolmer, South Africa's coach when Cronje was captain, said he was devastated by the news.

He told Sky Sports: "We had five great years together. No one enjoys seeing a young man lose his life.

"Whatever he did pales into insignificance," former England batsman Woolmer added.

"Hansie was thorough professional, kind, firm, generous, hard working -- his team would have walked up Table Mountain for him."

"He was one of the greatest cricket captains South Africa has ever had." Former England all-rounder Ian Botham, also on Sky Sports, said: "It's very bad news. But people will forget the good things he did and he'll be remembered for the wrong reasons.

"It's very sad - this will be a tough time for his family.

The match fixing case against Cronje will be closed following his, a Delhi Police source said in New Delhi.

"Now that he is no more, the case against him will be closed," the source said.

The source added, however, that their point had already been proved after Cronje admitted to have accepted money for fixing matches.

Proceedings against other accused in the case will go on, he said.