Ahoy, Towards A Level Playing Field

The Trust's initiative in South Africa would have as much value in India, where many players fail to do justice to their talent due to underprivileged backgrounds. 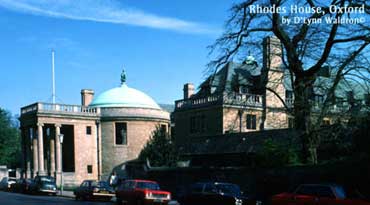 The ugly episodes surrounding the inclusion of Justin Ontong in the South African cricket squad, which has once again brought the problem of racial discrimination in cricket to the fore, has now developed into an unique tour of South Africa by the Rhodes Trust involving fifteen students of the University of Oxford.

Recognising the role of sport in fostering overall development, a fact ignored thus far in most countries, the trust and its scholars have decided to go ahead with this tour between March 8-29, 2002. In doing so, they aim to provide new opportunities for disadvantaged young cricketers; play a role in creating equal access to facilities, coaching and equipment for all those who want to play the game; and broaden the base of cricket in South Africa.

Inspired and motivated by the ideals of Cecil Rhodes, who had always given sports its deserved importance, the Rhodes Trust, on the eve of its centenary has shown considerable interest to undertake tours to different parts of the globe. Other efforts to remedy imbalances of opportunities are also being planned.

The Trust, the co-ordinating institution, is one of the world's largest and best-known charitable organisations aiming to provide educational and development opportunities for students throughout the world. The Rhodes community in Oxford is composed of an international group of scholars chosen from eighteen countries including South Africa, Australia, the nations of the Commonwealth Caribbean, India, New Zealand, Pakistan, and Zimbabwe.

Given the cosmopolitan, international nature of the Rhodes fraternity, it is natural for it to raise a voice against racial discrimination in any form. With the determination not lacking among its current representatives it has now joined hands with Nelson Mandela in South Africa to launch a new wing, the Mandela-Rhodes Foundation, to help aspiring students and players achieve their ends.

The three-week cricket tour has a Rhodes XI pitted against strong oppositions from Cape Town, Kimberley and Johannesburg in seven matches. While these matches form the centrepiece of the tour, each member of the touring party is committed to making a meaningful and lasting contribution, using their skills and efforts as well as possible on this short visit to South Africa.

As part of this commitment, the scholars, who are all experienced cricketers, will run cricket clinics for disadvantaged children in underdeveloped townships. These clinics will focus on the historic township regions surrounding Stellenbosch, Cape Town and Johannesburg. It is in these regions in particular that the imbalances of the past must be redressed most and the prospects for a more equal and prosperous future nurtured.

This tour also marks the start of an association between the United Cricket Board of South Africa (UCBSA) and the Rhodes Trust -- one that holds much promise for the game of cricket in the country and the lives of many South Africans.

As part of this new association, the Trust hopes to put in place by the end of the tour a scholarship programme for cricketers from disadvantaged backgrounds, which will provide these players with legal and financial support.

The Trust will also help the UCBSA increase the number of accredited coaches in South African schools, particularly in those catering to disadvantaged communities. It will institute an award for best performance in the Johannesburg Cricket Association and will undertake a series of coaching clinics for youth players from all backgrounds, irrespective of class, creed or colour.

Such initiatives would have as much value if undertaken in the Indian context. Despite having immense talent, many of our players fail to do justice to their talent due to their relatively underprivileged backgrounds.

With the coming in of corporate patronage in post-independence India, one accompanying cricket's rise to the position of India's national sport, the princes, the erstwhile patrons of the game in the sub-continent, had to give way to the corporates. The companies employed cricketers from educated backgrounds, men who would be able to serve them even after retirement.

It was a conscious policy to encourage the recruitment of cricketers with a minimum education. As Richard Cashman states, "When G. Sunderram joined BEST in 1956, having already represented his country, he was informed by the general manager that it was the policy of the agency to employ cricketers but they must meet the minimum requirements for a position".

Even the Tatas, the firm which has played a pioneering role in sports promotion in the country, preferred to recruit graduates, knowing that after retiring from the game they would not be liabilities for the company.

Further, with the decline in princely patronage the centers that pioneered in promoting the sport among the young were schools, colleges and clubs. The schools and colleges that played a leading role in cricket's promotion were those that could afford the infrastructure required for the game. The costly nature of the game acted as a detriment to its development and prevented cash strapped educational institutions from promoting it.

The rich and the upper classes, men who had the privilege of attending premier educational institutions, ones who had the necessary infrastructure, were thus able to assert monopolistic control over the game. Even the cricket clubs did not have much lower class participation.

These clubs often had a high membership fee, figures men from poor economic backgrounds could ill afford. Further, the aspiring cricketers often had to purchase their own cricket gear, which was beyond the reach of economically underprivileged Indians.

Despite having the potential, therefore, facilities and circumstances had prevented many from poor and underprivileged backgrounds in India from doing justice to their talent.

The elevated status of cricket in post-1983 India, after the nation's triumph in the Prudential Cup, was responsible for bringing to the fore stars from relatively underprivileged backgrounds like Kambli, Ganesh, Harbhajan Singh and Das. These men, children in 1983, must have taken heart from this victory and tried their best at the game.

The realization that playing the game well could bring in fame and money, led the families to encourage their wards to play the game. This appreciation, and opportunities, it may justly be expected, would be enhanced manifold if the Rhodes Trust collaborates with the BCCI in making cricket a viable career option for Indians from poor families.

Cricket after all as Ashis Nandy puts it is an "Indian game accidentally discovered in England".