The schools are among the ones identified by a committee headed by Justice Anil Dev Singh as having overcharged parents on the pretext of implementing recommendations of the Sixth Pay Commission. 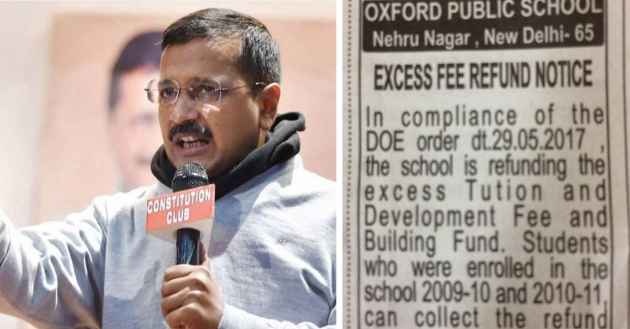 The schools are among the ones identified by a committee headed by Justice Anil Dev Singh as having overcharged parents on the pretext of implementing recommendations of the Sixth Pay Commission. Kejriwal said among the schools that have not rolled back the fee hike, one had a surplus of Rs 15 crore while another had Rs 5 crore surpluses.

Addressing a press conference on August 16, chief minister Arvind Kejriwal said the government does not intend to "interfere", but will surely "discipline" the schools, if needed. Renowned Delhi schools like DPS, Amity International, Sanskriti, Modern School and Springdales are in the list of 449 schools.

The Delhi government said it will “take over” these private schools if they don’t fall in line. They have been given two weeks.

“In Compliance of the DOE order dt.29.05.2017, the school is refunding the excess Tution and Development Fee and Building Fund.  Students who were enrolled in the school 2009-10 and 2010-11, can collect the refund from the school immediately,” Oxford Public School said a public notice. Published in Hindustan Times on August 23.

Following are the other notices issued by other schools:

Stern step by Delhi govt to take over Private Schools if they don't return excess fees, is working !! pic.twitter.com/vI8KCqILjg The chief minister also said he wants to assure private schools that there is no witch hunting. “We understand private schools are an indispensable part of education system,” he said.