There are several theories as to how the Sena-MNS-Congress politics will unfold in the coming months. All too premature, but the support and involvement Raj Thackeray has shown since Uddhav’s angioplasty till now, it is hard not to speculate for Mumb 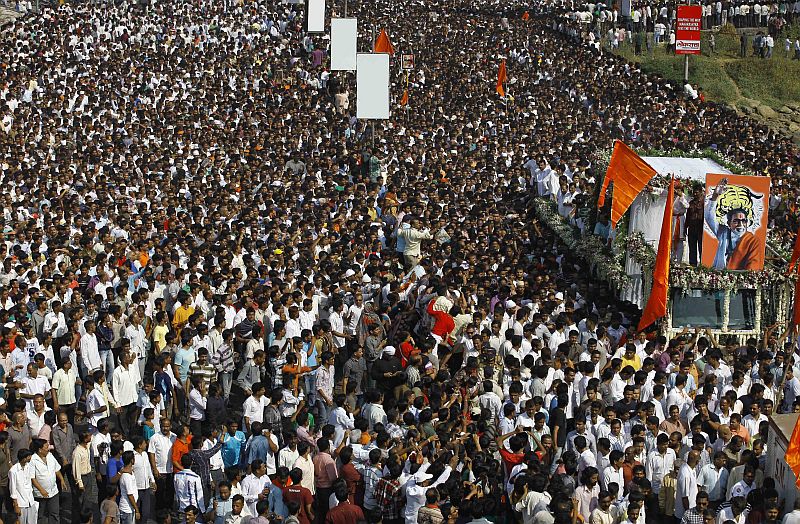 At this Dussehra rally, a signature event for Shiv Sena where thousands would be all ears for Bal Thackeray’s annual speech, he urged his followers—through a pre-recorded video—to take care of his son Uddhav and grandson Aditya. There was a Bombay High Court order that this would be last rally that was getting permission at Shivaji Park, which falls in silence zone, and Thackeray’s rallies would rarely fall under the prescribed decibel limit.

Even as the funeral procession made its way amidst lakhs of people to Shivaji Park, among other things, these two things kept bobbing up in my thoughts. One hadn’t seen an emotional (not provocative or aggressive) appeal from Balasaheb but then, one hadn’t really seen government/judicial machinery issuing finite kind-of warnings/orders to Sena either. Was it a sign of acceptance of the somewhat waning influence of Sena on Bal Thackeray’s part? And what about the fact that he had to appeal to the good nature and sense of his followers to preserve the party and his legacy?

There are several theories as to how the Sena-MNS-Congress politics will unfold in the coming months. All too premature, but the support and involvement Raj Thackeray has shown since Uddhav’s angioplasty till now, it is hard not to speculate for Mumbaikars.

Udhhav, who himself is suffering from cardiac ailments and still seems to be a reluctant politician, perhaps must be hoping that his son Aditya, whose claim to fame would be getting Such a Long Journey banned from Mumbai University’s syllabus, grows steadily and swiftly. Raj Thackeray, founder of Maharashtra Navnirman Sena (MNS), really has nothing to fear. After a wanting-to-be-all-inclusive start, his party has cracked the success formula (which he learnt well as he meticulously observed and absorbed his uncle’s teachings, as a youth leader of Bhartiya Vidyathi Sena, the student wing of Shiv Sena) of targeting outsiders that started with south Indians, and ended with the north Indian taxiwallas. 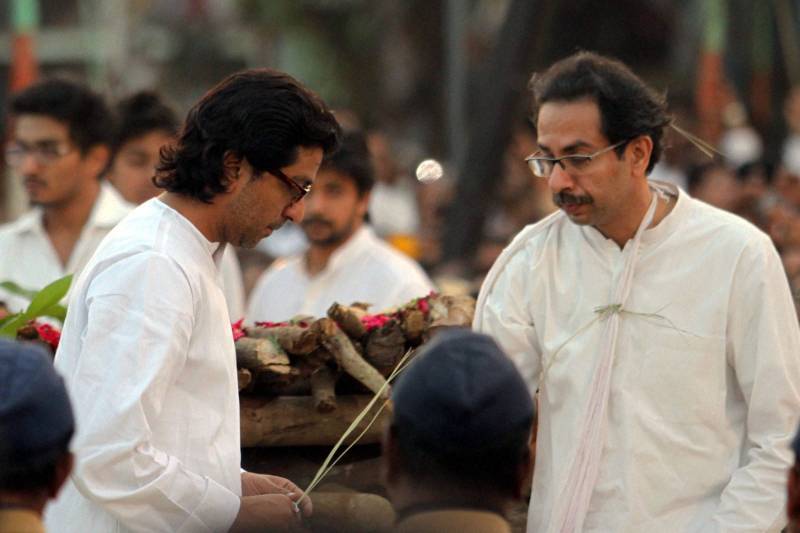 Raj Thackeray has kept his family and politics separate. He has been by his cousin and uncle through their illnesses—though he walked at a distance in the funeral procession. The seniors in the Sena, Manohar Joshi, Subhash Desai and Sanjay Raut, have not commented about their roles in the party. Everyone reiterates that all of them are working for sons of the soil movement in Mumbai.

Bal Thackeray’s Shiv Sena, preceded by Marmik (1960) and succeeded by Saamana (1989) communicated very effectively through his cartoons, speeches and editorials. He tapped the pulse of the youth, often unemployed and hence angry. However, paradoxically, while Sena doggedly destroyed the Communist Party-run unions, today most of the trade unions are run by the Sena.  This was planned as Ramchandra Guha wrote in India after Gandhi:

“Another target were the communists whose control of the city’s textile unions the Shiv Sena sought to undermine by making deals with the management….

Bombay was India's urbs prima, its financial and industrial capital and the centre of entertainment industry, in this most cosmopolitan of cities, a nativist agenda proved surprisingly successful, being special attractive to the educated unemployed. In 1968 the Sena won as many as 42 seats in the Bombay municipal elections, standing second only to the Congress.”

“Thackeray loves big businesses and big businesses love him. The Sena cut its teeth fighting communists in the chawls and the factories. The Sena-controlled unions are more dependable than the left controlled ones. The party’s money comes not from the rank and file but from city’s leading businessmen: a car dealer, an airline owner, a diamond merchant.”

Not to mention Enron.

Of the two point agenda—against outsiders and capturing the unions —the latter has been more or less complete with socialists and the comrades are now mere spectators in the city that saw vibrant labour movement in the 1960s.

Last year, Raj Thackeray, who had a stake in Kohinoor mills, and Uddhav Thackeray walked with thousands of mill workers in their morcha for housing rights. The last worker vs management struggle actually spearheaded by Raj was perhaps against Jet Airways in 2008. Not to forget Sena’s slightly delayed entry into Jaitapur nuclear power plant struggle.

Apart from these two programmes, fuelled by fiery speeches and perhaps an inherent communal-human nature to find someone else to blame for any deprivation in daily life, the one that really shook and shattered the city was Bal Thackeray's anti-Muslim agenda.

Now treated by Muslim doctors, Thackeray’s anti-Muslim venom surely prejudiced large sections of innocent-less-ignorant-more Marathi middle class population—already living in ghettos. And continue to. There hasn’t been a riot since the 1990s except for a few stray incidents. But the stereotypes and biases continue. And no one seems to even try to change that anymore.

As Ramchandra Guha wrote in India After Gandhi, “The rise of the Shiv Sena had, over the years, somewhat dented Bombay’s reputation as the most cosmopolitan and multicultural of India’s cities. That image was dealt a body blow by the riots and bomb blasts of 1992-93. This was now a ‘permanently altered city,’ ‘a deeply divided city,’ even a ‘city at war with itself.’”

Mehta said in Maximum City, “As for the courts, Thackeray is unfazed by their power. In June 1993, the Saheb declared, “I piss on courts judgments. Most judges are like plague-ridden rats. There must be direct action against them.’”

The man, who never regretted what he said or did  (he famously said, ‘My words are shot like a bullet and I do not care if truth hurts anyone”) also set another trend of moral policing. The witty, pungent cartoonist wasn’t so kind to others’ creative expressions. He objected and stopped any intellectual artistic debate over M.F. Husain to Deepa Mehta’s film Fire right down to gooey, utterly ignorable Valentines Day celebrations in city colleges. None were spared, except Michel Jackson, who apparently had "great movements".

Much has changed since Thackeray emerged on the scene but somehow everyone —his supporters and detractors— expected him and his party to be what they were 40 years ago. Perhaps, because some of those issues remain—unemployment and marginalisation. And are getting worse, one indication could be stupendous success of Mahesh Manjrekar movie, Me Shivaji Bhosle Boltoy that reiterated the Sena agenda to the tee (note it was released when no other Hindi film had released but then it ran for weeks on end).

And of his two successors, the one who follws/copies/apes the yesteryear Bal Thackeray is clearly Raj —from the way he dressed in those days, hand gestures, personal jibes at opponents and so on. Not Uddhav.  However, one cannot brush aside the influence Thackeray continued to hold over his followers even in his death. As he parts, he may have given Sena the last push it needs to resurrect and go beyond holding the BMC (which incidentally is better than holding many small states).

In times of economic downturn, increasing crime rates and extreme poverty will the ideology become redundant or more forceful? One of the channels was showing a clip from Bal Thackeray saying, “There are only two castes, the rich and the poor. Don’t make the rich poor but make the poor rich.” If that was really what he believed in, I wonder how he left behind a much fractured city with a mind-numbing rich and poor divide. A city that houses more poor than anywhere else (albeit more rich than most places, too). A city, where Muslims still cannot find houses in residential housing societies. A city, where Marathis continue to move to farther suburbs of Thane district.

And where is the city (and the state) headed with an inefficient, corrupt government led by NCP-Congress and jingoistic opposition in the form of Uddhav-led, confused Sena and Raj led, aggressive MNS and other parties? In the next few months, this is the question that would be before more than 20 lakh people in the funeral procession and more than 2 lakh people at the park who stood very sombre and observed pin drop silence as the pyre burnt.