For the third match in succession Indian batsmen failed to utilise the full 50 overs while chasing, capitulating against genuine fast bowling to hand the hosts a winning 3-0 lead. 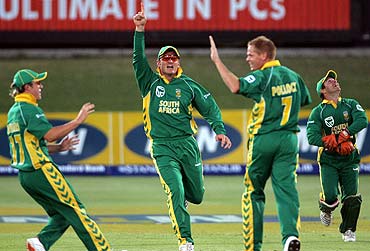 India crashed to an embarrassing 80-run defeat after their batsmen once again meekly capitulated while chasing a competitive target in the fourth one-dayer against South Africa today.

The Indian bowlers raised visions of a change in fortunes when they restricted South Africa to 243 for eight on a sporting track at St. George's Park.

But, as in the previous games on the tour, the batters were once again found wanting against genuine fast bowling and the side was all out for 163 with nearly 12 overs to spare.

Shaun Pollock (2-23) and Makhaya Ntini (2-34) were brilliant with the new ball and thoroughly exposed the inadequacies of India's top order.

And the duo were well backed by Justin Kemp (3-21), Andre Nel (1-40) and Jacques Kallis (1-41) who razed down the middle and lower order to give the visitors no glimmer of hope.

The defeat, that marked the series loss with South Africa taking a 3-0 winning lead, came after India failed to utilise the full quota of 50 overs for the third match in succession.

What must hurt the Indians was the way they surrendered without a semblance of a fight and the batsmen's spineless show that undid the good work by the bowlers.

After Zaheer Khan (1-38) and Sreesanth (1-29) did the early damage, veteran leg-spinner Anil Kumble (2-42) kept it tight in the middle to lead India's resurgence following huge losses in the previous two matches.

But the visitors still lacked the killer punch and South Africa once again plundered runs in the closing overs.

Gibbs had useful stand of 71, 61 and 60 for the third, fifth and seventh wicket with Kallis, Mark Boucher (29) and Pollock in an otherwise ordinary display by the hosts.

The middle-order batsman had a lucky reprieve in the eighth over when he was caught off a no-ball at the total 23 for 2 and he himself on a mere 2 runs. His knock spanned over 123 balls and included eight fours.

The innings was rocked early with Zaheer ejecting Graeme Smith for the third time in the first over without scoring.

New induction Sreesanth then rammed in a yorker which hit the base of Loots Bosman (0) stumps to leave the hosts gasping for 6 for 2 in the fourth over.

Things took a turn for the better with Kallis looking in impregnable form, striking several offside fours before the introduction of Kumble once again set them back.

Kallis attempted a cut off the first delivery and was caught behind the stumps for 49 from 62 deliveries with five fours.

Kumble was to strike again soon when he foxed AB de Villiers with a googly which the batsman attempted to guide around the corner.

The hosts' innings was once again put on the rails by the Gibbs-Boucher stand before Virender Sehwag's part-time spin earned a leg before verdict.

The Indians' joy in the field knew no bounds after last game's hero Kemp departed to Sachin Tendulkar off the first delivery he faced, guiding a catch to Sehwag in the point region.

Gibbs and Pollock once again put the innings on the rails with some sensible batting before the latter ran himself out for the second game in the running.

After a positive start to make 22 runs in five overs, India were set back when they lost Wasim Jaffer and Tendulkar in the space of five balls.

Jaffer, back in the line up as replacement for injured skipper Rahul Dravid, attempted an awkward drive-cut against the searing pace of Ntini and edged a catch to slip cordon.

Tendulkar (1) then departed when he failed to take his bat in time out of the way of an out-swinger from Pollock and wicketkeeper Boucher made no mistake behind the stumps.

Sehwag, leading the side in Dravid's absence, became the second victim of Ntini (2-26) when he was caught by Bosman for 18 in the 10th over.

Mohammad Kaif then was run out for 10 to make it 39-4 before Dinesh Kaarthick and Mahendra Singh Dhoni built a minor recovery.

But the partnership, eventually worth 43 runs, was always in danger with Dhoni's hit or miss style of batting.