It was meant to be a walk in the park for the Indians after restricting England to their lowest-ever total of 125 against the hosts. But the batsmen made heavy weather of the chase to ultimately prevail by four wickets. 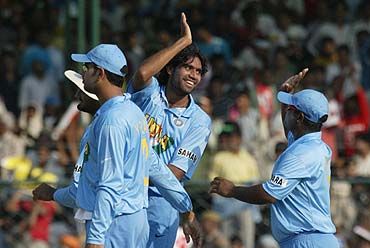 India relied on a clinical display by their bowlers to launch their Champions Trophy campaign with a morale-boosting four-wicket victory over England in a low-scoring Group-A contest here today.

After the bowlers did an admirable job to bundle out the visitors for a paltry 125 in 37 overs, the home team faced some anxious moments before overhauling the target with 20.3 overs to spare in a floodlit match at the Sawai Man Singh stadium.

The Indians were cruising along comfortably at 98 for two at one stage before losing four wickets in quick succession to make things a little too tight for themselves. Yuvraj Singh (27 not out) remained till the end as India scored 126 for 6 to notch up the victory as dazzling fireworks lit up the evening sky.

The hosts, who have been going through an indifferent form in recent times, were well served by left-arm seamer Irfan Pathan who buried his own poor form with the ball to spearhead an immaculate bowling performance.

Munaf Patel (3-18) and Ramesh Powar (3-24) complimented Pathan's extended new ball spell of 8-3-20-2 to rout the visitors to their lowest ever total against India.

The evergreen Sachin Tendulkar then guided the chase with a controlled aggressive innings of 35, which came from 41 balls and contained five fours.

The victory was worth two points for India who next face title holders, the West Indies, in their next clash at Ahmedabad on Oct 26.

The previous lowest total by England against India was 149 in a World Series match in Australia in 1984-85.

It turned out to be a pathetic batting performance with only Paul Collingwood (38) and Kevin Pietersen (27) being the notable scorers for England.

England, who were routed 1-5 in the one-day series when they visited India early this year, showed no signs of having familiarised themselves with the sub-continent conditions.

The 49-run partnership between Collingwood and Jamie Dalrymple (24) for the sixth wicket was the only bright phase of the England innings which ended in 37 overs, before the sunset.

Pathan has struggled with the ball for most part of the year, and was dropped from the Test team on the tour of Caribbean in May-July and then from the one-day team in the tri-series in Malaysia last month.

Patel and Pathan combined to rip through the England top order and the visitors never really recovered from 55-5 after 19 overs.

Patel (3-18) provided the opening breakthrough by trapping Ian Bell leg before the wicket.

The innovation of sending captain Andrew Flintoff at number three backfired with the all-rounder registering a blob, Pathan rapping him on the pads while trying to work across the line.

Pathan then delivered the major blow when he snared the key wicket of Strauss, caught in the slip cordon while fending a rising delivery.

Michael Yardy failed to live up to the pre-match hype, becoming the third leg before victim of the match to Patel for four.

Pietersen's fiery innings was short-lived, though.

After driving Pathan to square-leg boundary in the 15th over, the South Africa-born batsman then collected boundaries off Ajit Agarkar in successive overs, the step out and flick to fineleg being the stand out shot.

The big-hitting Pietersen then turned his attention to Patel, punching him through the cover for another for four.

But the right-arm seamer had the last laugh when he had him caught by Tendulkar at first slip.

Collingwood and Dalrymple then led a minor recovery before Ramesh Powar triggered a middle order collaps.

The Mumbaikar had Collingwood caught behind by Mahendra Singh Dhoni who held on to a bat-pad catch, ending a 54-ball innings comprising six fours. The rest of the line up capitulated meekly.

India were off to a flier. Even before the break, they had knocked out 55 of the required runs for the loss of Virender Sehwag.

Sehwag fell for nine but he tore into the England bowling during his brief stay to launch the Indian chase.

The Delhi batsman struck two stunning boundaries, an on drive to mid-wicket and a typcial slash over point, of Steve Harmison who seemed to bowl exactly at Sehwag's favourite area.

Harmison's over cost 20 runs. Sehwag, however, fell in the same over, poking at a wide delivery for a reflex catch by Strauss to end the brief but enterprising innings.

Tendulkar and Pathan, however, sustained the momentum with a rich array of shots on both sides of the wicket.

Sajid Mahmood beat Tendulkar with his pace on a couple of occasions but the wicket never had anything in it to trouble the batsmen.

Just when things were going smoothly, India lost two wickets in the space of four balls. James Anderson delivered the twin-strike, removing Pathan and captain Rahul Dravid in the 11th over.

Pietersen came up with a stunning catch at cover to send back Pathan and Dravid was consumed by an outswinger.

When Harmison struck Tendulkar in front of the stumps, India needed 28 from about 32 overs.