A Verdict For Peace

Schröder clinched his victory on two unexpected matters -- his stance on Iraq and the floods in the country. Never before has a foreign matter been so significant in tipping the scales. 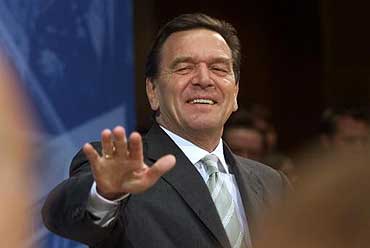 Elections in Germany this time have been exciting because they were so unpredictable that even the Gods didn't dare give a prognosis of things to come. But the verdict was out late Sunday night and the country voted Chancellor Schröder back into his job.

Nearly 80 percent of Germans voted on Sunday despite poor weather and just over half helped to bring back Chancellor Gerhard Schröder to his second term in office.

But even though this election made history it leaves a very tough and unenviable challenge for the winning coalition, the SPD-Green team to face -- that of rejuvenating a battered economy and all related issues like unemployment that come with it.

Unprecedented, everything was like never before. The polls throughout mirrored the race between the two competing candidates -- chancellor Gerhard Schröder of the Social Democrat Party, the left of centre SPD and main competitor, Edmund Stoiber of the conservative union of Christian Democrat CDU and the Christian Socialist, CSU.

At first Stoiber led in the opinion polls. But then Schröder gained ground and towards the end, the race was neck to neck putting any racing or cricket event to shame. This is unlike elections four years back when Schröder led the then chancellor Helmunt Kohl by a huge margin throughout.

Schröder clinched his victory on two unexpected matters -- his stance on Iraq and the floods in the country. Never before has a foreign matter been so significant in tipping the scales. Schröder promised never to go to war even if ally and close friend the U.S. did. Stoiber responded saying that Germany would go along with the U.N. resolution and couldn't decide for itself.

But the German public doesn't want war. Having suffered not just destruction and devastation but humiliation and guilt in World War II has left indelible scars that will heal only through peace. Germany didn't have an army until 1956 and didn't use one until recently for peace keeping in the Balkans and then in Afghanistan.

The basic law that the Allies gave Germany after WWII that it couldn't go to war was changed by the government after much public debate. But the people are sure that they want peace at any cost and Schröder's ratings improved with his stance.

The twin factor was the flood in the erstwhile East Germany. No one has probably benefited more than Chancellor Schröder due to natural and man made disaster and the timing couldn't have been more suitable. Schröder's ratings swung upwards as he responded swiftly to the floods and rushed to the spot directing immediate and sufficient aid to the region. Stoiber was on vacation and reached the spot four days later. Four days that probably have cost him the chancellorship.

This election was more Americanised and the two main candidates, Schröder and Stoiber, for the first time in the country's history went on television to debate live in front of their voters. This, experts said, was significant in two ways -- one in attracting an otherwise disinterested public to vote and two -- making people's choice more personality than issue led than ever before.

The winning SPD-Green coalition benefited with its two charismatic leaders, Schröder and the Green Joschka Fisher, former foreign minister, who was voted as the country's most popular politician. Schröder in fact very effectively diverted public attention from real, economic issues.

Politically however, say experts, it wouldn't really matter who led the country because both groups were fighting for the middle ground. Also, though these two issues swayed the public the reality that remains after the euphoria of elections is the economic state of the country.

The reality is that the German economy has taken a severe beating in the past few years. 4.5 million unemployed, accounting for nearly 10 percent of the working people, include not just East Germans who lost jobs as state-owned enterprises shut down but also the top end professionals including bankers, academics and media people. And the figure is increasing. Economic growth in 2002 will notch at under one percent while business insolvencies increase at a record rate.

The economy has been on the downslide due to several factors. One big reason is the cost of re-unification with the erstwhile East Germany. The country has already spent over 1000 billion in the past thirteen years on the eastern part. Cities like Berlin -- that regained its former glory by becoming the capital of unified Germany --  and Leipzig showcase the country's best efforts.

Museums, houses, roads, stations, have been built, renovated and scrubbed clean. Smart cars, smarter malls boast of every brand that the world has to offer. But a lot more remains to be done in developing the eastern part to the levels of the West. Add to this the sliding world economy and 9/11 and you have a disastrous combination that will require years of work to bring back the glory.

Schröder had promised to bring down unemployment in his last term. He in fact went as far to say that he wouldn't return as chancellor if he couldn't keep his promise. But he was unsuccessful because this is an issue embedded in the state of the economy. This went definitely against him. Even the current victory is based on a slim margin of just 11 seats in the 598 seats of the Bundestag or the German lower house.

The elections also decided the fate of smaller albeit significant parties of the country.

The Green Party: The Green party first entered the government in the last election as a coalition partner of the Schröder led SPD. It is the voice of the younger, progressive people. Its achievements in its first ever term in parliament in 1998 include pressing for energy through renewable sources while shunning nuclear energy. This bore fruit and the Greens have garnered a nearly ten per cent mandate this time. Next year the state will close two nuclear plants and all nuclear energy will be phased out by 2020. The SPD gained brownie points by projecting this increasingly popular stance as the decision of its government.

FDP: The Free Democrats, right wingers, were seen as kingmakers. If the SPD Green coalition fell short of the required seats it could have theoretically asked the FDP to join hands even though traditionally the FDP has always supported the CDU/CSU. It performed below poll predicitons though it finds its way into the parliament in the opposition.

PDS: The party that has its roots in the communist party that ruled East Germany has supporters who look at a democratic, pro-reform system with suspicion because they have seen reforms turn their world upside down. It is the biggest party in the eastern states.

The German voting system is a personal and proportional voting system where each person has two votes. Half of the 598 seats of this parliament will be decided by a direct vote for local candidates. The second vote is for a party. So if a party gets either three direct candidates or five percent of the second vote it is in parliament. This is unlike systems in say the U.K. or India where even if a party gets a sizeable chunk it may yet not be in parliament. In the U.K. for instance the liberals aren't in parliament despite a 20 per cent mandate. So with the PDS seeming to be closing on to its goal of five percent the others were worried and determined not to let them into the ruling coalition. However it did not make it this time.

The two big parties, the SPD and the CDU/CSU were certain that they didn't want the PDS in the ruling government and hence anlysts throughout predicted the possibility of non traditional coalition- either a 'traffic light' coalition of the red SPD, the Greens and the yellow PDF which is otherwise the opposition's supporter. But the FDP vice chairman in the last few weeks made a strong anti-Semitic comment that had the country up in arms. The SPD couldn't now touch them. Thankfully along with the Greens they just made it. Otherwise there could have been the grand coalition where the two big competitors would join hands to keep the communists out but that was predicted as the last resort only.

Inextricably linked to this issue is the immigration law that has strong supporters on either side. CDU/CSU and the FDP felt that permitting foreigners in only aggravates the unemployment issue. As it stands, EU citizens are permitted to work in Germany. The conservatives point out that there are already large groups of immigrants like the Turks who yet have to be fully integrated into German society. Where then is the possibility to promise any more people the opportunity to make a living in Germany, they asked. The votes show that nearly half the country backed that argument.

The left wing thinks differently. Schröder said he was open to immigrants who could offer something to the country. The Green party went even further. Joschka Fischer believes in letting any asylum seeker in. He believes that jobs can be created. The Greens stand for progressive environment policies for a sustainable future. Fischer for instance suggests how changing to energy from renewable sources like wind energy can create more jobs.

Now that the SPD-Green coalition is in power it will have to prove and honour everything it has collectively said. Some experts say Schröder could modify his position on Iraq now as it is linked to Germany's deep relationship with the U.S. The narrow victory is expected to rattle the markets. The Upper House the Bundesrat is yet dominated by the conservatives and hence modifying laws may not be easy. Every German citizen wants a few common things- better jobs, fewer taxes and more social security. Obviously that is easy to ask for but tough to deliver when costs mount and income dwindles.

So now the Chancellor will have to perform a few miracles to keep his job. For if he fails once again the German voter may not remain as generous and loyal.