A Twist In The Script

Down and out after being bowled out for 200, Harbhajan's magical fingers and Dravid's steady hand saw India storm back and take control on a minefield of a Sabina Park track that consumed 16 wickets on Day II. 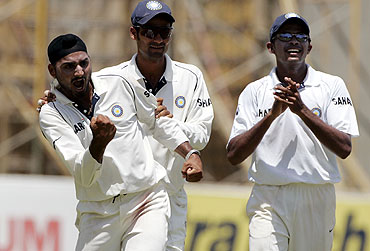 Harbhajan Singh's magical fingers and Rahul Dravid's steady hand saw India storm their way back and take control of the fourth and final Test against the West Indies after a dramatic second day's play on Saturday.

Down and out after being bowled out for a meagre 200 on the first day, the tourists hit back with vengeance to skittle out the West Indies for a paltry 103 and take a sizeable 97-run first innings lead.

Harbhajan exploited the awkward bounce of the Sabina Park track to claim his career-best five for 13, also his 19th fiver in Tests, from only 4.3 overs as the hosts were bundled out for their lowest ever total against India in 33.3 overs.

Dravid then stepped up to play an innings of character and vision in scoring an unbeaten 62, his second fifty of the match, and shepherded India to a relative position of strength, 128 for six, at stumps.

On a minefield of a track that consumed 16 wickets in the day, the Indian skipper showed technique and patience as he batted 130 balls and struck 11 fours.

During the course of his innings, when on 19, Dravid completed his 9,000 runs in Test cricket.

Dravid received brief but vital support from V.V.S. Laxman (16), Yuvraj Singh (13) and Mahendra Singh Dhoni (19), and the combined effort gave India an overall lead of 225 runs that could turn out to be more than a handful for Brian Lara's men.

India's start in the second knock was as terrible as it was in the first essay yesterday.

Wasim Jaffer (1) sparred at a rising delivery from Jerome Taylor on the off-stump and edged a catch to the third slip fielder.

Virender Sehwag (4) decided early it wasn't his kind of wicket and soon enough he was trudging his way back to pavilion, leg before to Taylor again.

Laxman then did enough with Dravid to put the innings back on rails. The two negotiated over after over before the Hyderabadi batsman edged a catch to Brian Lara at third slip.

Yuvraj then drove wildly at Corey Collymore and edged it to slips while Mohammed Kaif was cleaned up by Pedro Collins.

India were then 76 for five but the initiative was seized back through 46-run sixth wicket stand between Dravid and Dhoni before the latter's middle stump was pegged back by Taylor.

During the course of the stand, Dravid reached his second half century of the match when he straight drove Taylor to the fence. It took him 102 balls and arrived in 161 minutes, containing 10 fours.

Anil Kumble, who featured in a 93-run stand with his skipper in the first innings, was accompanying him on two not out at close.

Sreesanth had opener Chris Gayle (0) in his very first over and later accounted for Lara.

Lara began with a thunderous pull and then picked up two fours off successive balls.

The first one was a sweetly timed off-drive and he then flicked a delivery from the middle of his stumps to fine leg even as bowler Sreesanth let out an agonizing yell.

Lara then shifted his attention on Kumble and first flicked and then straight drove him for boundaries.

Even as Lara began to take the attack into the opposition camp, Sreesanth produced a delivery which bounced from a good length and took the edge of a hopping Lara's bat into the hands of Jaffer at gully.

Lara faced 40 balls for his 26 runs and hit five fours.

Harbhajan began the operations before lunch and claimed opener Daren Ganga (40) with his second delivery.

He continued with his unfinished over after lunch and promptly claimed one more success when Dwayne Bravo flicked a catch into the hands of the forward short leg fielder.

Harbhajan claimed one more wicket in his next over when Ramnaresh Sarwan (7) spooned up a catch at mid-wicket region.

He then accounted for Denesh Ramdin (10) and Collins (0) to round up the West Indian innings.

West Indies, who were 80 for 5 at lunch, lost their remaining five wickets in less than eight overs on resumption.

In all, they lost their final six wickets for the addition of 23 runs.

The West Indies' previous lowest total was 127 they made at Ferozeshah Kotla during the 1987-88 series.