4th April 2004 was the birth centenary of perhaps the greatest singer India has ever seen. He inhabited this earth for a mere 42 years, but he left behind an immortal legacy not just limited to his inimitable songs. 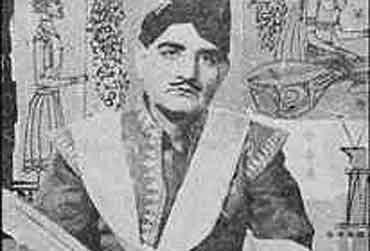 Perhaps it has to do with the times when he sang, when lyrics were almost spiritual because of which his singing got that extra edge of grace which comes from a perfect sync between body and soul -- between words and music, between tunefulness and singing, between harmony and melody.

One can enumerate his unsurpassed songs. But this column is better devoted to an enumeration of what a true artiste is or should be. Saigal exemplified true artistry--that quality which one expects from all artistes but which is unfortunately lacking in them, which prevents them from being given the  status of true artistes. Saigal died on January 18 1947--he inhabited this earth for a mere 42 years, yet each anecdote about him shows that he was not a mere mortal--or should one say that he was a true human being expressing the truest qualities which we are all are invested with but rarely express.

Saigal was poor, very very poor. To earn his living he used to sell sarees (he worked at various jobs; also worked as a typewriter salesman, among other things). He'd carry sarees in a basket and peddle them on the streets. A young girl used to
come running whenever she heard his voice and would ask 'D'you have a green saree? I want a green saree." She assured him that she would collect money to buy a green saree from him. They'd meet each day. And then one day the girl didn't show up and Saigal was anxious so he went looking for her . He asked around and reached her house only to find that the young girl had tragically passed away. He sat down his wares and took out a green saree in which the girl was dressed for her final journey. Saigal was inconsolable that she couldn't have it in her lifetime.

Stories of his generosity abound. Walking on the road he once saw a beggar lying uncovered and shivering. He immediately took off his coat and covered the beggar.. Once Saigal was attending a party at Juhu,  a seaside suburb of Mumbai where he had just been signed on for a film . He was drinking at the party and he walked out onto the terrace. Here in the starlit night he
heard a wandering minstrel singing and walking along the beach. So taken was he by the voice that he left the party and walked along the beach to track down the voice. When he found him he took the entire signing amount he had just received and put it in the minstrel's lap in tribute to his song. This man who was short of money himself empathized with everyone who was short.

Every singer worth his salt wanted to be associated with him. Shamshad Begum the singing diva of her time recalls "I was singing once-doing a recording for HMV and Saigal walked in and said to me, 'Ai soniye tu kitna sona gaati hai!' [O beautiful, how well you sing!"] These words I treasure till today. I was a mad fan of his, we all were."

The late Rajkumari once shared that she told Saigal that she wanted to sing with him and he asked laughingly, "Will you accompany me? She replied, pertly, "Where d'you want to take me? And he said, "To the other world".

Kidar sharma who often said that he got into lyric-writing thanks to KL Saigal explained that he was a mere boy looking for work but he was fond of writing and it was Saigal who assured the filmmaker that he had heard Sharma's poetry and the young boy was excellent. This resulted in Kidar Sharma writing Balam aaye baso more man main and Dukh ke ab din
beetat nahin, when he was just a youth. The two retained their friendship after relocating to Mumbai. Sharma recalls that it was when he had seen Puran Bhagat that he decided that he must make films. Another Saigal milestone.

Examples of his humility are equally illuminating. Kidar Sharma lived on the second floor of his building and Saigal would often visit him but the visit took place on the footpath--because Saigal couldn't climb the two floors, so he'd sit down on the sidewalk and have converse with Kidar Sharma. There were no airs of being the most sought after singer in filmdom.

Everything that one hears about K L Saigal suggests someone who exemplified humanity--a humaneness which in an idealistic world would be a presupposition in a true artiste. But is rarely seen. Today's artistes are streetsmart and pennywise. Saigal belonged to an era where compassion ruled and a man who suffered, also understood suffering. It was not only the artiste expressing his art but making a difference to the world through his own growth. It was the artiste taking responsibility for the society around him. What can one say of an actor-singer who had not a penny to his name when he could command the world's riches?

His association with New Theatres became the Production house's USP. Till today those who lived through that era speak of "how New Theatre films were not just films, they were part of our education". And Saigal played a huge part in this education.

In Saigal's unforgettable voice one can still hear jo beet chuki so beet chuki, ab us ki yaad sataye kyon? There is an entire philosophy within this song and Saigal's rendering makes it experiential. As indeed all the songs he touched with his voice do He showed that music could truly be a spiritual experience--and an artiste, a true representative of the divine. Avsar beeto jaaye praani tero or kisne yeh sab khel rachaya are but a couple of examples of that genius.

Sadly, we lost not only a singer but a yardstick for all artistes for all times so early in his life. Yet we have his singing legacy to remind us that human beings are made in the image of god. A rare artiste such as Saigal comes only once in a century to remind us of this godly inheritance which we are all children of, but have forgotten.