A New Era Of Engagement

It is a major change of mindset. It cannot be overlooked that this US administration is willing to amend US laws, an outcome not hoped for even by the most optimistic, but to work to adjust the international regime. 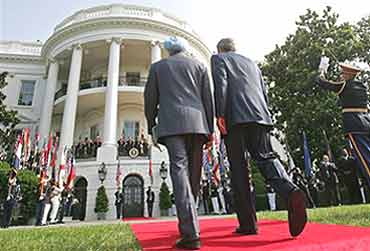 Clearly, when Prime Minister Manmohan Singh voiced the hope that India and the US were about to enter into a new era of engagement, he was not, on his current visit to Washington, expecting immediate solutions to the various problems that had bedeviled relations between the two countries for decades. Looking for signs of genuine "engagement," some concrete evidence that the US had indeed made a decisive shift in its attitudes towards India in response to what India has seen as a change in her world view in general and towards the US, in particular, was as much as he seemed to be expecting.

If, however, one was to judge the temper in India from either the cacophonic clamour of the left parties and their followers, still "struggling", for confidence in the country"s ability to hold its own, or the fulsome expectations of the weather-vanes, who appear to believe that the US can make India a great power, one would imagine that India expected the estrangement and mistrust of decades to have been converted to either "co-option" or "alliance" in the course of a three day visit.

Major tectonic shifts have been taking place in global power equations since the fall of the Soviet Union--not necessarily causally linked, of course. The emergence of the Single Super Power, the rise of China, the appearance of non-state actors and global terrorism on the international stage, the democratic Europeanization of all Europe and, in the distance, the potential of a resurgent economically influential Asia, have given rise to a degree of unpredictability and even perhaps, instability, in international relations.

From India's point of view, 2005 has witnessed just such a tremor.

It is not my intention, here, to chart the sad history of Indo-US relations, nor even to try and explain the reason why estrangement was born or existed. The fact is, India found the US Administration unfriendly and insensitive to her deepest concerns, just as, I have no doubt, the US found India gratuitously offensive at worst and untrustworthy at best. Actions (and inaction) of both countries only served to maintain and reinforce the chasm, if not to widen it. The US, at best, treated India with "benign neglect"; India, as the weaker country viewed US actions and intentions with suspicion. The nadir was perhaps reached in 1971, when, during the Bangladesh war, the US threatened India with the nuclear armed USS Enterprise. Mindsets grew entrenched and vested interests fed on the paranoia. While in a sense, this may be an oversimplification, I mention this to underline the difficulty any sort of engagement would face.

Of course, the determined efforts to improve relations did not start this year; after a particularly low patch post the 1998 Pokhran tests, when India was subject to shrill diatribes and an almost comic attempt at humiliation in consort with China, attempts were made to repair some of the damage, and President's Clinton's visit and the effusiveness of the Indian welcome created the right atmosphere for the first Bush Administration to take, unilaterally, what were then considered fairly bold steps in promoting military, political and some technological cooperation. In spite of criticism and cynicism at home, there were genuine efforts on the part of India to try and meet some of the US concerns.

But the mindsets remain, both in the US and in India.

Early this year, the new US Secretary of State, Condoleeza Rice, visited India as a part of her get-acquainted trip with the region, when, in response to a journalist's question on the proposed Iran-Pakistan-India gas pipeline project, she said that, while the US was concerned about the project, India's energy needs would have to be taken into account. In March, the US announced its decision to supply Pakistan with the long pending F-16s. Simultaneously, President Bush, in conveying this to the Indian PM, mooted the possibility of greater cooperation between India and the US.

Our media reacted along expected lines, even when an official of the US Administration, in a formal briefing, spoke of helping "India become a major power in the twenty-first century." After a flurry of visits to and fro, including one by the Indian External Affairs Minister to Washington, where he was accompanied by the Deputy Chairman of the Planning Commission, Montek Singh Ahluwalia, preparations started for the Prime Minister's visit in July. It was significant that Mr Ahluwalia was assisted by two officials of the Atomic Energy Commission, which gave rise to intense speculation regarding possible cooperation in civilian nuclear energy.

Some sanctions that had been imposed by the Clinton Administration after the Pokhran tests, had already been removed, and there was, at the same time , an (unrealistic, in my view), expectation that all sanctions would be lifted, and on the other, that either nothing would come of it due to legislative problems in the US and the strength of the non-proliferation 'ayatollahs' in the State Department, or the US intentions were in any case suspect. The last, of course, from our friends of the Left.

Then , in June, the Raksha Mantri visited Washington and on the 28th of June, signed, with the US Secretary of Defense, a New Framework for the US-India Defence Relationship. There had clearly been detailed discussions preceding the signing of this document, particularly after the US decision to sell the F-16s to Pakistan, and its offer to sell the same or even F-18s to India. India had clearly identified to the US, that it did not consider it to be a reliable supplier, which was a fair assessment, given India's experience of sanctions and, ironically, the experience of Pakistan and the F-16s.On the other hand, there was a desire for defence technology and some cooperation in military affairs. The US was apparently keen to sell defence equipment, but was reluctant to transfer the associated technology, in deference to the allergies of Pakistan.

What is remarkable about this document, is how closely it follows the recommendations of Ashley Tellis, the Carnegie Endowment scholar, and one-time political Advisor to the US Ambassador to India, Robert Blackwill and member of the US National Security Council. On the 14th of July, when the ink was barely dry on the new Framework, his study, titled, India as a New Global Power--An Action Agenda for the United States, was formally released.

The report gives a clear idea of US thinking on various issues, and many of its recommendations seem, in hindsight, to have been accepted by the Administration. In the defence context, he has proposed a decoupling of the India-Pakistan relationship with the US, Tellis had suggested relaxation of sales and investment in defence items, in which area there had not been much progress since 2001. He had also proposed that the Agreed Minute of 1995 should be replaced by "a new framework that is explicitly focused on improving Indian military capabilities to service larger bilateral strategic objectives.

This new defense partnership agreement ought to integrate US and Indian interests in the areas of military-to-military relations, defense trade and production, joint research and development, and combined operations, into a single document that defines both an ambitious vision for the new strategic relationship and a roadmap for realizing its goals over time. " Such striking commonality with the ultimate document adopted on 28th June, is also evident, later, in the Joint Statement adopted between Prime Minister Singh and President Bush..

The Framework Agreement, which states that it is an element of "the broader US-India strategic partnership", certainly appears to meet most Indian concerns.-- Collaboration in multinational operations would take place "when it is in their common interest"; opportunities for technology transfers will be increased, "in the context of defense trade and a framework of technology safeguards", as would co-production.

Strategic-level discussions have been institutionalized and their periodicity increased. Expectedly, the left parties in India saw this as their worst dream come true--an alliance, and a military one at that, with the US. And possibly aimed at China. The outrage was vocal. Several more serious analysts, however, have also voiced doubts--perhaps because such a relationship is so new. There is a clear need to explain the government's own expectations from this agreement to the Indian public. A close study of the document, in any case, would seem to belie most fears. It is absurd to think that India could be forced into a position which is not her own national interest. . Nonetheless, the US is the stronger country and India is the weaker one: it would be a major achievement if the balance in the document is retained. Given the mindsets already referred to, this should not be difficult.

The Defense Framework was seen by India as a precursor, a scene-setter, to the Joint Statement expected from the Prime Minister's visit. After the fact, it is possibly more than that--it is a critical element of the relationship emerging between the two countries.

Apart from the warmth of the welcome, the Joint Statement has indeed broken new ground. In my view, the new attitude of the US Administration lies in the formulation of the paragraphs on civilian nuclear energy. From the days when, after Pokhran I , sanctions were imposed on India, through the days of "cap, rollback and eliminate" India's nuclear programme, to the so-called "bench-marks" laid down by the Clinton administration, the administration has not only agreed "to enable full civil nuclear energy cooperation and trade with India", it has agreed to "seek agreement from Congress to adjust US laws and policies", and to work with "friends and allies to adjust international regimes " to enable such cooperation.

This, to my mind, is a major change of mindset. Sanctions have not been lifted and India too, has to do her part--as a nuclear weapon State. Yet, it cannot be overlooked that this administration is willing to amend US laws, an outcome not hoped for even by the most optimistic, but to work to adjust the international regime.

Why is this single issue so important? For two clear reasons--one, a clear sensitivity to India's genuine energy needs and two, a symbolic change on the part of the US, towards trust and confidence in India.

It is clear that this US administration sees its own interests served if India grows, economically, militarily and technologically, and is willing to make some advances; they will expect India to reciprocate. For one who would like to see India grow, and who has no prejudices about who we cooperate with to achieve our objectives, I feel that what is needed in India today is not only a real change of mindset, but some caution, and a great deal of self-confidence.

Arundhati Ghose was India's permanent representative/ambassador to the United Nations. In 1996, she dramatically vetoed the Comprehensive Test Ban Treaty at the Conference on Disarmament, a step that some say would not have been taken without her.