A Dash of Red 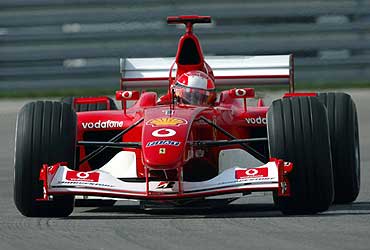 Michael Schumacher on the top step of the podium is a fascinating moving image. There’s the signature Schumacher victory leap, fists and legs, draped in scarlet red overalls, punching the air in delight. As the national anthems of Germany and Italy (representing his nationality and that of his team) fill the air by turn, Schumacher lets loose an array of emotions, a bit in tune with stereotype images of the two nations.

During the German anthem, Schumacher gives a gentle smile, and his face moves from contemplation to impassiveness. Then, as the first swinging notes of the Italian anthem take flight, so does Schumacher. Broad smiles. Winks and hand signals at his team members, crowding down below, for a job well done. And if the occasion is extra-special, like a come-from-behind victory orchestrated by some stunning driving and shrewd pit-wall moves, his right hand becomes a baton, conducting the Ferrari crew to a boisterous rendition of the Italian anthem. The winner’s trophy is hauled and hailed, the bubbly sprayed and a picture freeze-framed for the record books.

It’s a watchable sequence, a glorious celebration in sport. Sure, it’s become repetitive, having been aired so many times in the past seven years (the time Schumacher has spent at Ferrari so far), but it still holds great appeal and freshness. Just as well, for it is likely to be rerun for a few more years and many more races to come. Schumacher is not done with Ferrari or F1. Neither is the Italian team with the German, who has, in a span of just seven years, driven them from being one of the hunters to the hunted on the Formula 1 grid. In classic Ferrari guts-and-glory style.

Earlier this week, Schumacher and Ferrari agreed to extend their working relationship till 2006, thereby putting an end to speculation that the German ace might quit Ferrari and the sport at the end of next year. Ferrari also handed out similar contract extensions to five other men who have played as much a part as Schumacher in Ferrari’s reversal of fortunes: team director Jean Todt, technical director Ross Brawn, engine director Paolo Martinelli, chief designer Rory Byrne and head of engine design Gilles Simon.

In other words, the A-team of Ferrari will stay together for three-and-a-half seasons more, till the end of the 2006 season. That’s huge.

Schumacher is Ferrari’s public face, its ambassador, its mascot. It’s his sublime moves on the racetrack that largely shape the public perception of the Italian race team, and in a larger context, that of Ferrari as a global car manufacturer. We sigh, applaud and marvel at Schumacher when his car is engulfed in flames during a refuelling pit-stop, but he sits calmly in it, waits for the mechanics to douse the fire, nonchalantly uses his gloved palms to wipe off the foam from the fire extinguisher that has strayed on to his helmet visor, makes up the deficit on the cars ahead of him, passes them, and drives to victory lane. Oh, Schumi!

In the sheer rush and excitement of the moment, we forget to think of the numerous men, and a few women, who make possible such classic Schumacher moments. They too wear scarlet red, but they work behind the scenes, away from the glare of the public and the cameras.

Like the fine bunch of mechanics, who keep their nerve and fight fire, when not literally, then metaphorically. When the red Ferrari has to be turned around in 6.7 seconds flat, complete with new tyres and 40 litres of fuel, they do it with the regularity of a heartbeat. Through long days, and sometimes nights, they go over each and every small part of what is, arguably, the most complex piece of machinery in sport, just to make sure they get the most out of it and that it doesn’t backfire during the race. They keep the Ferrari running and in shape. Ferrari’s reliability and pit stop timings over the past three years will show that these guys are the best in the pit-lane.

Or the master strategists, Todt and Brawn, who stand guard on the Ferrari pit wall, soak in the big picture and the small picture, and fire out the orders. They crunch the numbers thrown on the bevy of television screens in front of them, translate these numbers into a strategy in English, and find the best way for Schumacher to execute it. Their job is to be Schumacher’s roving eye, observe what other drivers and teams are doing, and come up with ways to gain an advantage. Countless times they have won races by outsmarting rivals in pit stops alone. When it comes to playing pit-lane poker, they are the best people to have holding your cards.

Or the car engineers and designers, who craft a piece of machinery that goes faster than every other car and has proven its ability to withstand extreme race conditions without compromising on performance. Year after year. They work painstakingly on the car, in blue-light factories, on practice tracks and in high-tech places like the wind tunnel, to squeeze precious milliseconds out of it. They give the Ferrari drivers what is, unarguably, the best car on the grid.

That Ferrari’s support functions are in the best of hands and firing all cylinders makes the job of their drivers -- Schumacher and Brazil’s Rubens Barrichello -- that much easier. It’s not that the people at Ferrari do things differently than other teams—it’s just that they do the same things better than them.

At the end of the day, Ferrari is more than just Schumacher. It’s a fine blend of talented and committed individuals. If the parts start to come apart, you bet the management there will have a real fire-fighting job on their hands, and simply able Ferrari mechanics and deep pockets won’t guarantee peace. It’s why, announcing the contract extensions, Ferrari chairman Luca di Montezemelo said: "This (the extensions) is a strong signal to our co-workers, sponsors and fans. And it stops every outside attempt to destabilise an environment that has overcome difficult moments." Strong words that dwell on a past, while standing up for team values and continuity.

Schumacher too recognises the importance of continuing with long-standing relationships that have been fun and fruitful. Back in 1996, soon after he switched seats from Benetton to Ferrari, Brawn and Byrne followed suit. Each time Schumacher’s contract has come up for renewal, the future of Todt, Brawn and Byrne has been inextricably linked to his. In a statement posted on Ferrari's website, Schumacher said: "I feel extremely comfortable at Ferrari. The fact that Jean Todt and other key personnel in the team have also confirmed they plan to stay with Ferrari for the same period of time made this decision even easier to take."

The status quo in team personnel is great news for Ferrari and its supporters. Never mind the fact that they’ll be shelling out, according to reports, some $36 million a year for Schumacher (making him the world’s highest-paid athlete), and some for the others, to win races and championships. Rivals like McLaren and Williams, though, must be squirming in the knowledge that the outside chance the Ferrari bulwark might collapse from the inside is pretty much gone. In order to dethrone Ferrari, they cannot expect Italian generosity.

Few will bet against Ferrari extending their winning run of three consecutive championships to seven, which is what Ferrari will be aiming for now that they have sealed the personnel line up till 2006. The fastest car on the grid. The best driver at its wheel. Some able men in key positions. A development cycle that has so far defied the cyclical theory of sport, and is yet to show signs of tapering off. The Schumacher Era at Ferrari might just have gained a couple more years.

As the current lot of F1 drivers go, there is Schumacher, and then there are the rest. Even at 34, a relatively old age in F1, he is so far ahead of other drivers, it is daunting to imagine the kind of numbers he might finish up with if he does wind up his driving days at the Italian team in 2006, as he so desires. Already, he has achieved more than any other racing driver, dead or alive. Five championships (tied with Juan Manuel Fangio), 67 race wins (to put it into perspective, the next best is Alain Prost with 51; Kimi Raikkonen, billed to be the next champion in line, has 1), and numerous other minor records.

These numbers are a fair reflection of Schumacher the driver: the best of his generation and one of the best, if not the best, of all time. Even if he were to leave F1 today, it will take an extraordinary talent, driving with impeccable consistency, to surpass his records. Throw in another three-and-a-half years into the mix, and the bar gets raised further.

Such has been the sweep of Ferrari’s domination over the past four seasons, it has taken brute changes in the rulebook by the F1 organisers to rein in the Italian team. It has worked. The rule changes, coupled with notable strides taken by a few other teams, has bridged the gap in the races between Ferrari and the other front-runners, and made the ongoing season a lot more competitive. Ferrari are facing the heat after a number of years, and that makes it interesting, for all concerned.

Over the years, the folks at Ferrari have loved the thrill of a challenge. It’s a feeling they might have missed during the time they were running alone, miles ahead of the field. They have been in such situations before, and have come through with elan. For all that it is worth, Ferrari’s F2003-Ga is the best car on the grid and Schumacher the quickest driver. It’s an advantage that is more likely to become apparent over the course of an entire season, rather than over a handful of races.

As Ferrari heads into the Canadian Grand Prix this weekend, a lot of pieces are coming together for the team. Watch that top step!

'I Cannot Wait To Get Going'