'Not only was Johnny a good entertainer on screen but also off screen. I'm hard put to decide which was better -- the entertainer or the human being.' The celebrated film writer remembers his friend who passed away on July 29. 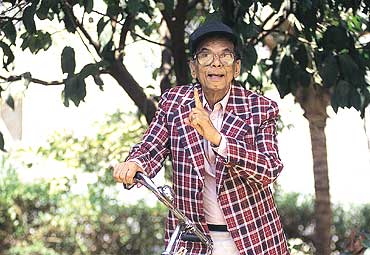 He was my closest friend in Mumbai. We had been friends since1952. If I'm not making a false assumption, I was his closest friend in Mumbai. In 1952, we rose from the same film Aar Paar. That was his first major role as a comedian as before that he only did minor roles here and there. A full-fledged comedian's role came to him with Aar Paar which was also my first film as a writer. We cemented our friendship then, though we knew each other earlier when he had a minor role in Baaz and I used to visit the sets. In Baazi too he had a small role which he got courtesy Balraj Sahni.

Balraj used to travel by bus and he met Johnny who was then a bus conductor. He liked the young man's manner and got him a bit role in Baazi for which he was writing the script along with Guru Dutt. In fact, Balraj wrote the script and dialogues of Baazi. Johnny always wanted to join films and he got his break through Balraj.

When he met Guru Dutt, he somehow wormed his way into his affections and so strong became their relationship that he was part of every film Guru Dutt made either as director and as a producer. Except one - Sahib Bibi Aur Ghulam - which I directed. Guru Dutt told me to write a role for Johnny in this film too, but I was adamant that I could not deviate from the story and force a character in who was not needed. Guru was worried that Johnny would be upset at being left out of the film but I said I'd speak to him. And I did explain to him and he didn't mind..

We were all friends. We'd travel together for shikar, for holidays. Our professional ties also brought us together. We were both part of Guru Dutt's troupe. Guru had different writers earlier, but once we met I wrote for him and Johnny was in every film he made so we were very close. Johnny was not a very educated man but he was very sharp.

He could not see very well from one eye. Once he had to undergo some eye tests for some reason. He had to read the vision chart and first he read with the good eye. He memorized the chart so thoroughly that when he was asked to read with the weak eye, he had the whole text by heart. That's an example of his memory, of his grasp of things.

He was, I think, a born artiste. I have yet to meet an actor who was so relaxed in front of the camera. He was both a director's delight and a director's headache too. You couldn't shoot him in a very tight frame, he'd never do the same thing twice but whatever he did he looked very natural. Using the word "natural" for him would also not be appropriate but he had developed his own style of speaking which sounded perfect on him but wouldn't have sounded okay on anybody else. He had this drunken drawl in his voice. I often told him not to use it so much. He started his career as a drunkard in Baazi and the style stuck.

He had a wonderful sense of humour. He could crack jokes all the time. I myself was very good at repartee and Johnny could crack jokes.. Guru Dutt exploited this weakness by deliberately leading us on to get into acerbic conversations; then he'd sit back and enjoy the verbal sparring like watching two cocks fight. This was one of Guru's favourite pastimes. And Johnny and I always fell for it.

Not only was Johnny a good entertainer on screen but also off screen. I'm hard put to decide which was better -- the entertainer or the human being. Every actor, every film personality has been involved in some or the other extra marital affair at some time or the other but Johnny, never even in rumours, was ever accused of being unfaithful to his wife. A more beautiful marriage I have yet to see. He met Noor his wife during Aar Paar, married her and lived happily ever after. It is difficult to decide who coloured whose life, who contributed more to the other - both of them had a wonderful relationship which they sustained till his dying day. Johnny was never coupled with any other girl. The only starlet he got attracted to, he immediately made her his wife.

Johnny, O.P. Nayyar and myself, all three of us, got a major break with Guru Dutt. Nayyar moved away but Johnny and I stuck to Guru Dutt whose production became home for us. He was very humane. He had become a big star in his own right. Once he was shooting with Bimal Roy for Madhumati and I went on his set. He was sitting surrounded by people. He was always being mobbed. He had so many followers. We were sitting and talking when suddenly there was a shout 'Badru-oh Badru!' Johnny's real name was Badruddin but nobody used it. We were all surprised and turned to see who it was. Anybody else would have been very embarrassed to see the kind of man who was shouting, but not Johnny. He responded, 'hey so and so how are you?' He requested an assistant director to give this visitor a chair. This man was a friend of Johnny's friend when he was a bus conductor! But Johnny accorded him the heartiest welcome.

Johnny was extremely charitable and gave away thousands of rupees per month in charity. But he never let anybody know this. Once an uncle of mine came to ask for some charity. I took him to people I knew. Waheeda Rehman, Guru Dutt, Johnny Walker. Johnny gave him some money. Later my uncle asked what name should he make the receipt in, as the donor would be entitled to a tax rebate. But Johnny refused a receipt and said "if I take a receipt then it is not charity!"

Few people know that Johnny had an unique hobby - that of getting people married. I particularly remember this gentleman Rafi Ajmeri who was quite advanced in age. Johnny found him a suitable partner and got him married. Not only that, he'd foot all the wedding bills. This gave him a lot of pleasure. I know so many people who he got married.

He was very large hearted. At lunch during shoots, his food would come from home and it was a huge tiffin which could feed forty people. He was very particular about his meal times - always wanted to eat at a particular time. He would never eat late. And all his friends who were starving, didn't have an income, used to drop in for lunch. At each meal every day there would be at least 20 people sharing his lunch. And this is no exaggeration. I once told him these people were leeches who were exploiting him, and he replied: "See others have different pastimes - they go to the races, gamble etc. This is my pastime, it gives me pleasure."

He was down to earth and never showed off, he never took his comedian tag seriously. You'll find all comedians all the time throwing wisecracks etc., but never Johnny - unless of course the situation demanded it. Then he was very good at it But he never foisted his mood onto others.

And I mustn't forget that he was a great family man - he and his wife were such a happy couple. He did everything for his brothers and sisters and their children. Got them married, settled them, got them jobs, made them independent, did not give them charity or got them dependant on himself . Noor, his wife, supported him in all this. And they all adored her as much as him.

He had a set of principles which he stuck to consistently - like he didn't work after sundown, or on a Sunday. He then became a family man. He was a heavy smoker at one time but after marriage he gave it up and never touched cigarettes again and never ever drank. I'd tease him calling him a joru ka ghulam [wife's slave] but he'd laugh good-naturedly and never get provoked.

He had one weakness - he was very frightened of hospitals and surgery. He was heavily diabetic and now that his kidneys had failed, he required dialysis but he refused to go to hospital . I took him to my own diabetologist Dr Covil. He was under supervision but would act surprised at being alive. His Creatinin-level was extremely high. Johnny was never very strong and recently I'd see him emotionally upset too.

I could write a book on him, I was so close to him.