At the close of third day's, England were 114/2 with retiring Alastair Cook and captain Joe Root unbeaten on 46 and 29 runs respectively.

India recovered well to keep the fight alive against England in the fifth and final Test but the Day 3 ended with the hosts establishing a healthy 154-run lead at The Oval, London on Sunday.

At the close of third day's, England were 114/2 with retiring Alastair Cook and captain Joe Root unbeaten on 46 and 29 runs respectively. They have already added 52 runs for the third wicket.

Having conceded a 40-run first innings lead to England, India needed quick wickets to stay afloat in the match. And as it stands now, things are not looking good for Virat Kohli & Co. In their bid for an early breakthrough, Kohli wasted both the reviews, in the 10th and 12th overs, against Keaton Jennings and Alastair Cook, both LBW shouts off Ravindra Jadeja.

Shami finally gets the reward

Then, Mohammed Shami gave the much-needed breakthrough with his first wicket of the match. After toiling hard on the first two days without success, Shami finally found success, in the form of out-of-form Keaton Jennings (10) in the 13th over. Shami beat the England opener with an away going delivery, which crashed into the off stump.

15 overs later, Ravindra Jadeja, who scored 86 to keep India in the match, bowled Moeen Ali (20) with a beauty. The left-handed batsman failed to close the bat-pad gap while going for a drive against a turning delivery and was clean bowled. Couple of overs ago, in the 25th, Ali was dropped by India's safest slip catcher KL Rahul, off the bowling of Ishant Sharma.

But there was Alastair Cook. Resolute and firm. Batting for the 291st and final time in Test, the 33-year-old was four runs away from hitting back-to-back fifties. He was involved in three starts, 27 for the first wicket with Jennings, 35 for Ali and an unbeaten half-century with Root as England dominated the final session today. 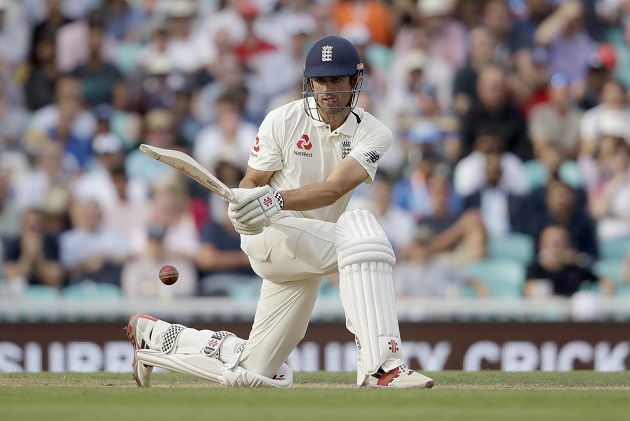 The former England captain scored 71 in the first innings, and with another fifty in the second essay, he sure will make an unforgettable parting gift to his team-mates.

In a career spanning, more than 12 years, the Chef has established himself as one of best ambassadors of the game with his veritable presence on and off the field.

Earlier, resuming on their overnight score of 174/6, India added another 118 runs in reply to England's first innings total of 332. A valiant rearguard action from lower order batsmen helped India close the gap to 40 runs.

The manner in which Indian tailenders fought was reminiscent of English show yesterday.  Buttler shepherded England tailenders brilliantly to keep the Indian bowlers at bay. The ninth wicket stand between Buttler and Stuart Broad resulted in 98 runs. In all likelihood, that stand will decide the outcome of the match.

Both Jadeja and Hanuma Vihari hit half centuries. Jadeja came close to scoring a scoring his maiden Test hundred but was left stranded at 86 not out. It's his ninth fifty in 54 innings. His best Test score is still 90, which he scored against England at Mohali two years ago.

The 29-year-old, making a comeback into the team, stalled England's progression with a 77-run seventh wicket partnership with Vihari. This is India's highest partnership in the match, 13 more than what Cheteshwar Pujara and KL Rahul have posted for the second wicket on Day 2.

Vihari is here to stay

Vihari impressed on his debut, scoring 56 runs. Having survived some anxious moments at the start, the 24-year-old applied himself to play a matured innings. During his 124-ball knock, he witnessed the infamous Indian batting collapsed.

The parade of wickets didn't bother the right-handed batsman as he went on to score a fifty in his first ever Test innings. He reached the mini-milestone with a single off the 104th ball, in the 71st over, bowled by Ben Stokes. He, however, failed to make it big, departing 20 balls later. He edged a Moeen Ali delivery to wicket-keeper Jonny Bairstow.

'Bat-wielding' Jadeja knows how to shepherd

From 237/7, India added another 55 runs to the total with Jadeja playing a pivotal role, before the last man Jasprit Bumrah got run out in the 95th over. But before that, Jadeja reached his ninth fifty in the 113th ball, with a four off Ali.

Bumrah allowed Jadeja to add crucial 32 runs in the post-Lunch session to give India yet another chance to fight for a win. Bumrah didn't score a single run in that 55-ball last-wicket stand. 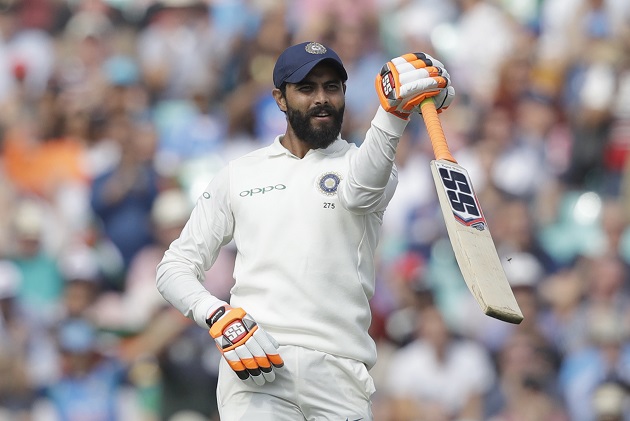 Before that, India lost the wickets of Ishant Sharma (4), edging another Ali delivery into Bairstow's gloves, and Mohammed Shami (1), caught by Stuart Broad at long-on. He failed to curb his instincts and went after Adil Rashid, and paid the price for it.

Anderson, who is two wickets from becoming the most successful pacer in Test cricket, was fined 15 per cent of his match fee for unwarranted behaviour during second day's play yesterday.

In the 29th over of India's first innings, following an unsuccessful LBW review against Kohli, the 36-year-old, according to ICC, "snatched his cap and jumper from umpire Kumar Dharmasena and then spoke to him in an aggressive manner."

The right-arm pacer, courtesy two scalps in the innings, now has 561 wickets. He is likely to overtake Aussie great Glenn McGrath (563) as the fourth highest wicket-taker by the end of the Test. Muttiah Muralitharan (800), Shane Warne (708) and Anil Kumble (619) – all spinners – are the top three bowlers in the all-time list.

Day 1 of the match witnessed India reducing England to 198/7. But Jos Buttler scored 89 runs to help the hosts post a good total of 332 on the second day. Then, India's top order collapsed to close the day at 174/6.

England have already taken an unassailable 3-1 lead in the five-match series to take the Pataudi Trophy, with wins in Birmingham, Lord's and Southampton. India won the third Test at Nottingham.