The team, led by Olympic medallist Sakshi Malik and Asian Games gold medallist Bajrang Punia, will have a pre-tournament conditioning camp ahead of the main event. 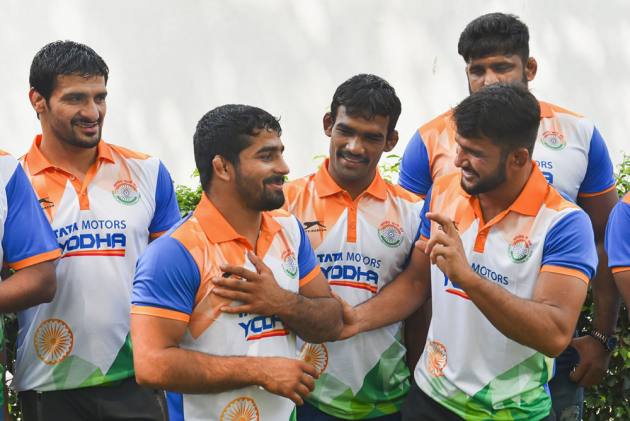 A strong 30-member Indian team left for the World Wrestling Championships to be held in Budapest, Hungary from October 20 to 28 on Tuesday.

The team, led by Olympic medallist Sakshi Malik and Asian Games gold medallist Bajrang Punia, will have a pre-tournament conditioning camp ahead of the main event.

The team was given a warm send-off on Monday.

They will be accompanied by other officials, including coaches and support staff. The WFI has selected 10 members each in freestyle, Greco-Roman and women's wrestling categories.

The burden of India's medal hunt at the worlds will be on the shoulders of Bajrang (65kg), the country's best bet in the freestyle category, while the nation will look forward to better performances from Sakshi (62kg) and Commonwealth Games gold Pooja Dhanda (57kg) medallist, the spearheads of India's campaign in women wrestling.

Interestingly, Ritu is the only Phogat sister to feature in the squad as Asian Games gold medallist Vinesh was ruled out because of an elbow injury.

"The pressure factor is always there. But I believe it gets the best out of me and I am willing to give 200 per cent to better my previous performance," Ritu said.

In the under-23 world championships last year Ritu had won a silver medal and she was confident of putting up a performance that will help her win gold.

Navjot Kaur, who will compete in the 68kg category, felt that after her performance in the Asian Championships the expectations have risen.

"I have had to overcome certain obstacles and worked hard for the worlds. I will give my best shot in Budapest to make my country proud. Maybe I can inspire more girls to take up wrestling in Punjab," said Navjot.

Women's team coach Kuldeep Malik was confident when he said, "We are prepared for the important event. The girls have worked well on their techniques and we hope to bring our medals tally this time around," said Kuldeep.

Men's freestyle coach Jagminder Singh was equally optimistic. "We will definitely win some medals but I can't tell you the number. But I can assure that we are wrestlers will work hard at the preparatory camp before the main event to reap the benefits," he said.

India has a reasonably good record in the world meet, including the lone gold won in 2010 by Sushil Kumar in Moscow. Three years later, Bajrang Punia won a bronze medal in Budapest in 2013. In the women's category, Vinesh Phogat has clinched a medal. (ANI)