Home » Hotels » A Delhi Heritage Holiday, Where Stories Are Set In Stone

decade. The city’s magnificent history and vestiges of lost empires guarantee it a place in the canon of great ancient cities such as Constantinople and Rome. Yet, the city’s state-of-the-art infrastructure betrays her true metropolitan nature. Delhi is a financial and educational hub, absorbing more than 2.5 lakh migrants annually. An average of 15 million tourists flock to the city each year due to its reputation as a cultural hotbed. With three World Heritage Sites, indisputable botanical beauty, posh colonies and slum areas, Delhi boasts real character.

The outline of the Jama Masjid against the sky, as seen from the Red Fort

THINGS TO SEE AND DO:

Most of Delhi’s tourist sites are spread over three broad areas – Central Delhi, the seat of govern-ment; Old Delhi, which has managed to keep its vibrant, unique past alive; and South Delhi, the realm of posh residential areas, markets and malls

Between 1911 and 1931, India’s Colonial rulers aimed to create a new capital district in the heart of Delhi that would symbolise their power. The area was developed to a design by British architect Edwin Lutyens. To this day, the awe-inspiring Rashtrapati Bhavan atop Raisina Hill, looking down the Rajpath, remains a glorious emblem of India’s sovereignity. Post independence, the grand buildings, spacious vistas and tree-lined boulevards of Lutyens’ Delhi became the abode of the political and bureaucratic elite and evolved as the power centre. This is, arguably, the greenest, cleanest and most attractive part of the city.

This phenomenal structure was designed by Edwin Lutyens and Herbert Baker, with the aid of a town planning committee. While the building is closed to the public, the architects’ attempts to integrate Indian features in the design are evident in the façade. Nearby, the two Secretariat buildings, called North and South Block, are built on a platform. Behind the buildings are Mughal Gardens.

Down the road from the gates of the Rashtrapati Bhavan, Rajpath culminates at India Gate. This statly monument commemorates the Indian soldiers killed in World War I. Today, the green lawns surrounding the arch are a popular communal space for citizens, who come here during breezy summer eveningsor sunny winter mornings to have a picnic.

The erstwhile Queen’s Way is now called Janpath. This long road sweeps past ministerial residences, the National Museum and luxury hotels, and leads to its namesake market, famous for boutique stores and pavement stalls. Nearby is Connaught Place, Delhi’s premier shopping district. Designed in typical English fashion by Robert Tor Russell in 1913–31, it is an arcade boasting retail stores, restaurants and other commercial establishments.

This 18th-century observatory on Parliament Street was built by Maharaja Jai Singh II of Jaipur (1699–1743). It comprises six instruments, of which the largest is the Samrat Yantra, a sundial.

Believed to be the oldest amongst the city’s monuments, Purana Qila’s foundations were laid by Humayun, the second Mughal Emperor. However, the Afghan leader Sher Shah Suri expanded the complex by adding more buildings, the ruins of which can be seen today. Don’t miss the Sher Mandal, a two-storeyed octagonal building, and the grand Qila Kuhna Mosque. A sound and light show is held here in the evenings.

A UNESCO World Heritage Site, Humayun’s Tomb (1565-66) is the first of the famous garden tombs of the Mughals. The main building, its water channels, fountains and gardens have all been beautifully restored today.

Delhi Sultanate’s lesser-known Sayyid and Lodhi dynasties built the little architectural gems around which these gardens were planned. Landscaped in 1968 by Joseph Allen Stein, today they are a jogger’s delight and picnicker’s haven. Check out the 15th-century Bara Gumbad, the Shish Gumbad and the tomb of Sikander Lodhi.

This is the tomb of the viceroy of Awadh, Mirza Muqim Abul Mansoor Khan, built by his son Shuja-ud-Daulah in 1758. It’s unmistakably built in the architectural tradition of the Taj – onion dome, garden et al.

‘Shahjahanabad’, as this area was once called, was established in 1648 by the fifth Mughal, Shah Jahan. It was a hub of politics, culture, poetry and arts, trade, and the sheer pursuit of leisure. After the revolt in 1857, the old city was largely destroyed by the British.

Among the Mughal city’s best preserved monuments are the Red Fort (Lal Qila), complex, named after the red sandstone from which it is built, and the ethereal Jama Masjid. The Red Fort, in particular, makes visitors reel under the cumulative impact of marble, pietra dura, gilded pillars and delicate carvings. Not to be missed are the red sandstone Diwan-i-Aam with its painted marble canopy; the Khas Mahal and its intricate lattice screen, the adjacent Diwan-i-Khas; the Shah Burj and the Moti Masjid, named for the lustre of its marble.

Mughal emperor ShahJahan’s Jama Masjid is one of the finest examples of the three-domed Mughal mosque. A few relics of Prophet Muhammad, including a hair from his beard, his sandals and his footprint in marble, are preserved in a pavilion of the Jama Masjid, along with two copies of the Quran.

The Jama Masjid is a favourite haunt for photographers

In 1192, the defeat of Rajput king Prithviraj Chauhan at the hands of Muhammad Ghori ushered in ‘Islamic rule’ in India. Ghori made Turkish slave-promoted-to-general Qutubuddin Aibak the steward of Delhi, beginning the ‘Slave Dynasty’. Local Hindu and Jain temples were dismantled to make way for the Quwwat ul Islam Mosque, with intricately carved pillars, and a west-facing prayer hall.

The star attraction of the complex, however, is the Qutub Minar (1200–1210), the construction of which was started by Aibak and completed by Iltutmish, his son-in-law. This 73-m-high sandstone and marble tower is a UNESCO World Heritage Site.

Iltutmish’s tomb and madrasa, built by the king himself in 1235, is a deceptively simple building, with Quranic injunctions on all sides. Allauddin Khilji built the Alai Darwaza (1311), on the southern side of the Quwwat ul Islam mosque. The rust-free Iron Pillar of Mehrauli that stands in the courtyard is a 5th-century relic that bears an inscription eulogising the Guptas.

One of Delhi’s most iconic structures – Qutub Minar

The Tughlaqabad Fort (circa 1320), built by King Ghiyasuddin Tughlaq, is a vast stonescape hugging a rocky spread. Scramble up on the grassy hillocks of the fort to admire the views. The tomb of Ghiyasuddin (1325), is just opposite the main gate of the fort.

Hauz Khas is a pleasant enclave of pillared verandahs that once served as madarsas. The tomb of Firoz Shah Tughlaq (1352) is also located here. These buildings are arranged in an L-shape around a hauz (water tank), built by Allauddin Khilji in 1300. Hauz Khas cuts a pretty picture, especially since the area has been developed as a quirky, bohemian

The Jama Masjid, built between 1650 and 1656, is the most revered mosque in the city. The Dargah of Nizamuddin Auliya is the final resting place of the Sufi saint and his disciple, poet Amir Khusrau. It was built in the 14th century.

The Baha’i House of Worship, also known as Lotus Temple, is a beautiful structure that resembles a lotus. It attracts numerous visitors.

Amongst famous Sikh temples is the Bangla Sahib Gurudwara, where Guru Har Kishan, the 8th guru of Sikhism, lived when he visited Delhi in 1664.

Several British-era churches evoke Delhi’s Colonial past. St James’ Church (1836) at Kashmere Gate is the oldest church in the city.

The N-Block in Connaught Place is a hub for restaurants. Try Berco’s for an Indo-Chinese meal, Nizam’s Kathi Kababs for non-vegetarian rolls, Nirula’s Pot Pourri for the salad bar buffet, Wenger’s for bakery items, patties and kebabs and the old fashioned United Coffee House and Embassy for good solid food.

Karim’s near Jama Masjid is a non-vegetarian’s paradise, from the basmati badam pasanda to the mutton burra. In addition, the dhabas of Paranthewali Gali are famous for their deep fried, stuffed food. Methi, rabri, matar, banana: you name it, they’ve got it.

When to go Delhi is a furnace from mid-April to July. Between July and October, visit if you don’t mind the humid heat caused by the monsoon. It can get quite cold in December and January, an excellent time to enjoy soft sunlight on broken columns and soul-warming roasted sweet potatoes on the streets. But from October to November (autumn) and February to March (spring) – Delhi is perfect

Air Delhi’s Indira Gandhi International Airport is linked to most domestic airports in the country. Pre-paid taxi stands and radio taxis are available at both terminals, domestic and international

Road Delhi is served by AH1 from Kolkata via Bardhaman, Varanasi, Allahabad, Kanpur and Agra; NH48 from Mumbai via Surat, Ahmedabad, Udaipur, Ajmer and Jaipur; AH1 from Amritsar via Jalandhar, Ludhiana and Ambala; and the Agra-Lucknow Expressway and the Yamuna Expressway/ NH19 from Lucknow 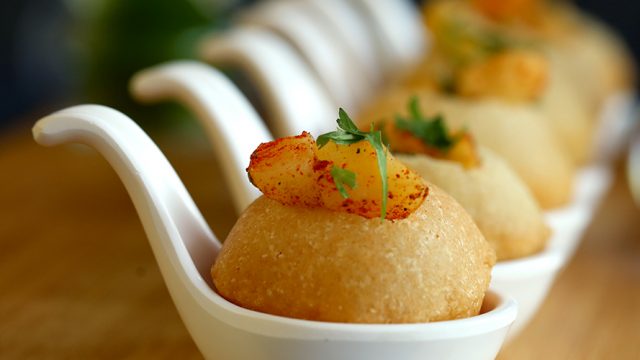 The restaurant specializes in Gourmet Street Food with modern Indian flavours. While half the menu has Indian food, the other half has a European, American, Asian, Mediterranean and Italian cuisine.