Zoomcar Ties Up With Mahindra Electric To Launch EVs In Mysuru

A unique initiative to promote use of electric vehicles among masses 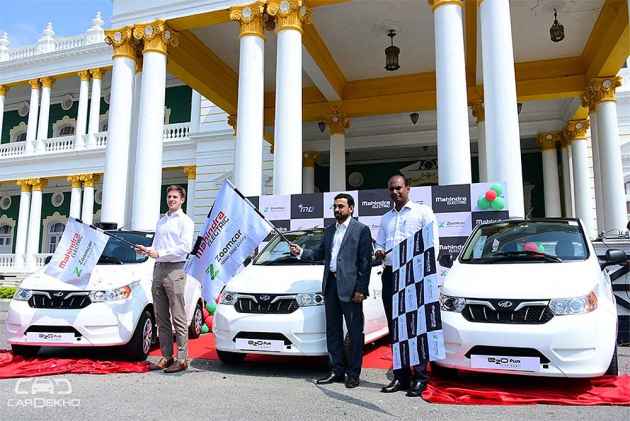 An electric wave seems to be kicking off in the country thanks to our government’s resolution to turn our automotive market into an all-electric one by 2030. Taking a step in similar direction, NITI (National Institution for Transforming India) Aayog recently announced its intention of setting up 135 electric vehicle charging stations in the national capital region (NCR). Promoting the same, private players Zoomcar and Mahindra Electric have come together to launch a unique sustainable mobility ecosystem in Mysuru, Karnataka.

Under this project, 20 Mahindra e20 Plus cars will join the fleet of Zoomcar vehicles in the southern city. Additionally, two fast charging units have been installed in the city. At present, these charging points are located in key locations of Mysuru – Country Inn and Garuda Mall. With the help of the state government the carmaker will be installing more such units in other key locations of the city. Visitors as well as city dwellers can hire these vehicles.

Buyers who are reluctant to buy EVs and have doubts about its capabilities can take a long trial of the same via Zoomcar services, wherein they can gauge its running costs, space and comfort over long journeys and its outright uphill-downhill performance. The initiative will be a test for the Mahindra e20 cars as well, because Mysuru city has got a mix of hilly and plain roads which will certainly put the car’s abilities to the test. On the plus side, it’s an opportunity in disguise for Mahindra to elevate the practicality of its EVs in the minds of the general public.

India’s fifth cleanest city, Mysuru is being developed with a holistic EV ecosystem strategy. Working on the recommendations of the NITI Aayog’s report, the Karnataka state has taken the resolution to promote the same beyond metro cities under its state EV policy – a first of its kind state policy in the country.

How likely are you to opt for an electric vehicle if the same service is launched in your city? Do let us know your answers via the comments box below.