'Yuvi To Open In Tests'

Springing a surprise, the skipper says 'Yuvraj is a class act. His stature and ability should not be kept out of the team. There is a slot for him as an opener. I am sure that with his ability and mindset, he will definitely get used to it (opener's 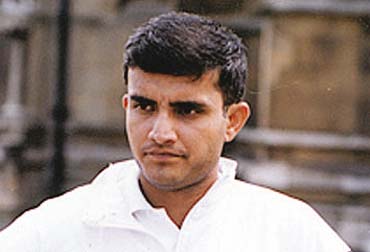 Skipper Saurav Ganguly categorically stated that Yuvraj Singh would don the role of opener in Test matches and vice-captain Rahul Dravid would continue to double up as wicket-keeper in one-dayers.

"(Virender) Sehwag never used to open before he opened for India and has done amazingly well as an opener. Yuvraj has got the ability to open," Ganguly said when asked about efforts to include the southpaw in theTest side as an opener.

"Yuvraj is a class act. His stature and ability should not be kept out of the team. I think there is a slot for him as an opener. I am pretty much sure that with his ability and mindset, he will definitely get used to it (opener's slot)", he said.

Ganguly said Yuvraj was the first choice "for the moment" considering his ability and the number of games he had won for India. He said if Yuvraj did not do well as an opener, then other options would be explored.

In one-dayers, Ganguly said Dravid would continue to keep wickets. "Dravid has helped the team in terms of balance and batting depth. If you can find somebody who can do the job as good as Dravid has done in the past two years for the team, then we might start thinking. But at the moment, he is doing such a wonderful job, we will have to stick with him."

Asked if he contemplated opening the innings in the shorter version of the game, he said "It will revolve around Sachin Tendulkar, Sehwag and myself, what suits the team. So, it (opening the innings) is definitely not out of the question.

"We will see how it goes, what's the form of Dravid and how well I am playing. All these things we will have to keep in mind," said Ganguly, at the sidelines of the week-long fitness camp for the Asia Cup probables in Bangalore.

Ganguly expected India to dominate the coming season, particularly the Test series against Australia and South Africa at home, as most of his teammates were playing their best cricket.

"Let's see how best we play. But I don't see any reason why we cannot dominate," Ganguly said.

Terming the coming season as an important one, he said India have six Test matches lined up -- four against Australia and two against South Africa. "And then we will keep on playing for the whole of next year. It's a big season, we have to be fit and that's what the fitness camp is for.

"We played well as a team over the last two years and we need to improve on that and get better. I think the boys, most of them are playing their best cricket. I hope they will continue it in the next 3-4 years." Ganguly said

The skipper said he was looking forward to Harbhajan Singh's return to the squad in time for the series against Australia.

"Harbhajan is a match winner. Anil's (Kumble) bowling is best seen ever. These are the two main spinners with Murali Kartik coming up." But he hastened to add that one would have to keep in mind the coming ICC Champions Trophy in England where the conditions would suit the seamers.

When pointed out that the net should be widened to nurture spin talent, Ganguly said if anybody can bowl better than Kumble and Harbhajan, "they are most welcome".

"You never play more than two spinners at home. I never believe in playing three spinners." Ganguly said the selectors would give a look-in if they find an exceptional spin bowler in the camp.

He said the pace bowlers' camp was meant to ensure bowlers like Zaheer Khan, Ashish Nehra, Ajit Agarkar and Avishkar Salvi were fit and strong. Injuries were a part of the job, Ganguly said adding the fast bowlers were prone to them more because of the rigours involved.

Noting that the fast bowlers have started to play an important role in overseas tours, the skipper underscored the need to have a group of seven to eight seamers ready all the time -- not just for the series against Australia and South Africa but keeping the future in mind.