'Writers Have No Armies'

The recipients of the prize on the controversy surrounding their acceptance of it: 'The more we were told to turn our backs, the more we wanted to se 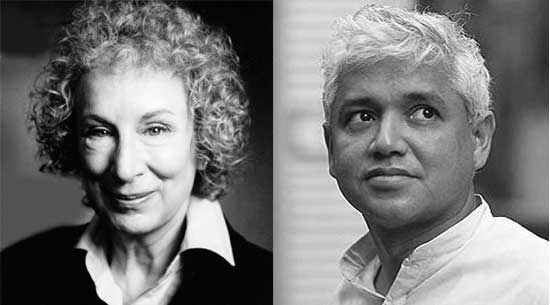 Amitav Ghosh: Because we are sharing this generous prize, we have decided to give a shared speech. We both thank you very much for the kind words you have said about us and our writing.

Margaret Atwood: This prize honours, not just individuals, but areas of achievement. This year you’ve chosen to invite two novelists, thus adding the art of the novel to a very distinguished list of many other disciplines, from astrophysics to medicine to music to statesmanship.

Amitav Ghosh: One of us comes from India, the other from Canada. Neither country is lacking in historical bloodshed and in present-day inequities.

Margaret Atwood: Neither of us can afford to be self-righteous.

Amitav Ghosh: Both of us were urged by some people and groups not to come to Israel on this occasion. We were told that no artist should attend any cultural event here – no matter how hopeful and moderate such an event might be – considering the unequal, unjust, and harsh and dangerous conditions of the Palestinian people in the Occupied Territories.

Margaret Atwood: When we said that we were very sympathetic but we felt the urgent necessity of keeping doors open -- as do several organizations we work with – we were informed that we were deluded, and worse.

Amitav Ghosh: But novelists are stubborn: when young, they refused to give up novel-writing, despite the worried advice of their families. The more we were told to turn our backs, the more we wanted to see -- and to speak -- for ourselves.

Margaret Atwood: Propaganda deals in absolutes: in Yes and No. But the novel is a creature of nuance: of perhaps, of maybe. It concerns itself, not with gods and demons, but with mortal people, with their flawed characters, their unsatisfactory bodies, their sufferings, their limited and often wrong choices; with the dubiousness of their own actions and the unfairness of their fates.

Amitav Ghosh: Writing a novel often requires you to see life through the eyes of those you may not agree with. It is a polyphonic form. It pleads for the complex humanity of all human beings.

Margaret Atwood: The public territory the novelist defends is very small, even in a democracy. It’s the space of free invention, of possibility. It’s a space that allows the remembrance of what has been forgotten, the digging up of what has been buried.

Amitav Ghosh: Worldwide, novel-writing is under constant pressure, both from political groups who want to co-opt it, and from powerful governments who’d like to silence it. Around the world, novelists have been shot, imprisoned, and exiled for their failure to toe somebody else’s line. But they continue to write stories.

Margaret Atwood: Perhaps this vocation of ours will soon be obsolete. For coming towards us is a frightening change in our planet. Floods and droughts, deserts and famines and epidemics – will they draw the world into ever more destructive conflicts?

Amitav Ghosh: Or will we band together freely in order to help one another, as so many organizations and religious groups and environmentalists and scientists and artists are now doing?

Margaret Atwood: We are both here as an act of good faith, because we believe that there are many people here and around the world who think as we do.

Amitav Ghosh: Hope is not out there, apart from us. Like the stories people tell, it comes from within. Like these stories, hope too must be passed on to others. Give up hope, and we are lost indeed.

It’s a crucial time in the Middle East. Proximity talks between Palestine and Israel are resuming right now, brokered by George Mitchell of the U.S.

All who truly want a chance for Palestinian people to be able to live a decent life, to be compensated for what they have wrongfully lost, and for the destruction of their infrastructures – and all those who hope Israelis will be able to live without rocket fire, bombings, and worse – can only wish these talks well, trust that those engaging in them are doing so seriously and in good faith, and hope that a fair and secure two-state solution will finally result.

Meanwhile, we two fiction writers find ourselves in Israel, having been awarded half each of the “Present” section of the Dan David Prize. You may read about the prize here

It is a prize founded by a private individual, and administered by its own office located at Tel Aviv University. Despite what we have been told by its attackers, it is not one and the same as the State of Israel. This year is the first time this prize has gone to two novelists. It’s worth pointing out here that neither of us is a member of any of the three religious groups that claim this part of the globe as their Holy Land.

We two fiction writers are very small potatoes indeed in the context of the momentous political events now unfolding. But writers everywhere are soft targets. It’s easy to attack them. They don’t have armies, they can’t retaliate. We have both received a number of letters urging and indeed ordering us not to attend, on the grounds that anything connected with Israel is taboo. We have both sent letters to many but not all of the urgers and orderers. (Not all, because in some cases the petitions etc. have appeared online without having been sent to us first.) The letters have ranged from courteous and sad to factual and practical to accusatory, outrageous, and untrue in their claims and statements; some have been frankly libelous, and even threatening. Some have been willing to listen to us, others have not: they want our supposedly valuable “names,” but not our actual voices.

In other words, the all-or-nothings want to bully us into being their wholly owned puppets. The result of such a decision on our part would be – among other things – to turn us into sticks with which to beat other artists into submission, and that we refuse to do. We are familiar with what other artists of many countries have been put through in similar circumstances.

Having read perhaps too many spy thrillers, we have even wondered if some of these hyperbolic correspondents have been agents provocateurs, bent on turning us against the Palestinian people. (As is often pointed out, on the Internet nobody knows who you really are.) Others have styled themselves our friends and admirers, whereas in fact they have never been any such thing. Some have urged us not to touch Israelis and their institutions, while themselves continuing to deal with them. Others, once we have stated our positions, have been understanding and helpful, and ready to facilitate meaningful exchanges. Some have let us know that although they endorse parts of the boycott, they do not endorse the cultural part, considering it a form of censorship. Some have signed public petitions—not shown to us -- for which they later –in private letters to us– apologized. Some have ordered us to give the prize money to various parties, including themselves, or else to various Palestinian organizations who would in fact not accept any such gift from us. Some have asked nothing more than our understanding and remembrance.

To all we say: We are not against fairness and the creation of a long-overdue Palestinian state. We are not “defying” or “rejecting” anyone just because we cannot endorse a particular tactical formulation, although we understand the pressures that give rise to such formulations. And we do not consider you bad, ignorant, stupid, hypocritical, or vicious because your view of means and ends is not the same as ours.

What then is our position? It may be summarized by this excerpt from a speech made by Anthony Appiah, President of PEN American Centre, on April 27.

“What you may not know is that both Margaret Atwood and Amitav Ghosh have been subjected to an …offensive urging them to reject the award as part of a campaign of cultural isolation against Israel.

The literary community in this country does not speak with one voice on the question of Palestine. But I want to be clear about where the PEN American Center stands on one aspect of this vexed issue. We have to stand, as we have stood from the very beginning, against the very idea of a cultural boycott. We have to continue to say: Only connect. We have to stick with our founding conviction that writers must reach out across nations. To stand anywhere else would be to betray our history and our mission.”

We are both PEN members. Margaret was a co-founder of PEN Canada, and is now an International Vice President. To do as our correspondents demand would be to destroy our part in the work we have been doing with PEN for decades – work that involves thousands of writers around the world-- jailed, exiled, censored, and dead. Writers have no armies. They have no militant wings. The list of persecuted writers is long, ancient, and international. We feel we must defend the diminishing open space in which dialogue, exchange, and relatively free expression are still possible.