The cherub is standing next to Amit Chaudhuri and it makes a beautifully complete picture--cute Pravasi Bongs will always rule philistinous cities such as Delhi, no matter what shape they come in

Ah, book festivals, don’t you just love them? I don’t mean the ones they do in Hay-on-Wye or Edinburgh or Adelaide, I mean the ones distilled from our homegrown Delhi sour grape varietal. It doesn’t matter whether it’s the ICCR organising it or Sahitya Akademi or the Toxic Fertilisers Commission, these things have certain requirements that no other denomination of Lit Fest can match. 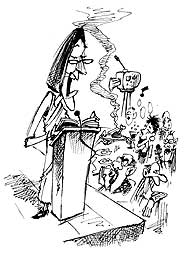 Requirement No. 1: Leaving out Important and Interesting Authors. What would be a Del Lit Jamboree without various journos calling you up to ask why you had been excluded from the invitees list. "So, siiiir, please tell me why haven’t you been given invitation by Kitab?" "Maybe they didn’t think of it." "But why, sir? They are not liking your book or something?" "Maybe they haven’t read it. There are a lot of books out there." "So, sir will you be going?" "I may attend a few sessions." "You will go as a writer, sir?" "No, I will go in my capacity as a professional Festival Collector." "Sir?" "I collect Festivals. I like them. Film Festivals, Wine festivals, Sufi Music Festivals, Naan and Parantha Festivals, Motorcycle Chassis Festivals, Book Festivals, all kinds I like." "Siir, you are joking sir." "Have you read my book?" "No siir, sorry sir, but I —", "If you had, you would know I never joke. Goodbye."

Not that I think I am important but, yes, there is a certain pride in being a member of the Salon des not-invited Saalas, especially if that salon includes Allan Sealy (new book just out), Kiran Nagarkar (ditto), Mukul Kesavan (second book due now for a decade), Kai Friese (first book overdue for five years), Samit Basu (fifth book about to elbow past the third one) and many others.

Requirement No. 2: Attending as many parties and launches as poss. So, at the start of the Kitab-Kabab-Shabab-Sharab (henceforth KKSS) I zip to the competing event, the launch of Kiranbhau tchya navin upanyas God’s Little Soldier, at the Park. I get there early to avoid the sniffer dogs and security because Aamir Khan is going to be reading from the book. Kiran is pacing up and down, nervous as hell. I give him a hug and he calms down for seven seconds. Where other authors would be collaring hotel staff and snapping "Get me another large scotch!" Kiran turns to a Park PYT and, politely but plaintively, asks "Where is my pastry cake?" When the cake comes he retreats into a private cubby-hole to eat in peace. The launch is a huge success: Shubha Mudgal sings Kabir bhajans, Aamir K’s reading is greatly over-shadowed by Kiran’s own reading, and the party afterwards is happeningly convivial. The Kakkerazzi use up many chips and flash batteries on their digital cameras. I abandon the do at its peak and tag along shamelessly with handsome/pretty, smartly dressed, talented writer-youths who actually have been invited to KKSS dinner.

The dinner is a dignified affair at the T-Man Singh where a young blonde in a beautiful green dress is pointed out to me: "That’s Pablo, by the way. Pablo Ganguli who’s organised Kitab." I look again, and, under the little rubber-banded tufts of blond hair I suddenly see a South Calcutta cherub. The cherub is standing next to Amit Chaudhuri and it makes a beautifully complete picture—cute Pravasi Bongs will always rule philistinous cities such as Delhi, no matter what shape they come in.