'I don't have to,' Trump said on whether he would seek congressional approval for more military action against Iran. 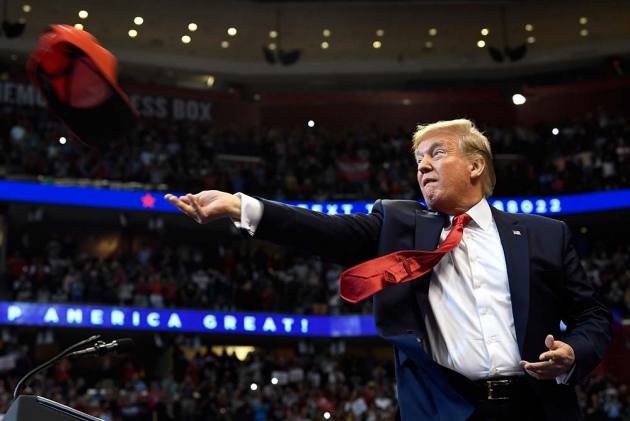 US lawmakers concerned about rushing to war with Iran adopted a measure Thursday aimed at reining in President Donald Trump's ability to take military action against the Islamic republic.

The resolution was introduced by Democrats after Trump's order to kill an Iranian commander and retaliatory missile strikes by Tehran dramatically escalated tensions and raised fears of a devastating war between the two foes.

The mostly symbolic but politically charged vote, 224 to 194, was largely along party lines, with three members of Trump's Republican Party joining Democrats in approving the measure demanding the president not engage in military action against Iran unless authorized by Congress.

Among them was Matt Gaetz, one of Trump's staunchest supporters in Congress who noted in a floor speech that the measure did not criticize Trump, but said that "engaging in another forever war in the Middle East would be the wrong decision."

"I don't have to," Trump said when asked whether he would seek congressional approval for more military action against Iran.

"And you shouldn't have to," he added, "because you have to make split-second decisions sometimes." Trump signalled Wednesday he was stepping back from the brink of war with Iran after a US drone strike that killed commander Qasem Soleimani was followed by Iranian missile volleys against bases housing American forces in Iraq.

But Democrats, and some Republicans, have expressed deep skepticism about the administration's rationale for Soleimani's killing, and are demanding Congress reassert its power over a commander in chief's use of American military might against another nation.

Citing the War Powers Resolution of 1973 which forbids a president from taking the country to war without congressional approval, the measure "directs the president to terminate the use of United States armed forces to engage in hostilities in or against Iran or any part of its government or military."

But the text also provides for key exceptions, allowing use of force to defend against or prevent an "imminent" attack against Americans.

House Speaker Nancy Pelosi, speaking to reporters about the resolution, said Trump "must de-escalate and must prevent further violence. America and the world cannot afford war."

The House measure was introduced as a concurrent resolution, a form of legislation that does not carry the weight of law. But as a political instrument it could serve as a rebuke to Trump's foreign policy.

Pelosi said her Democrats were moving forward because their concerns were not addressed in a closed-door briefing to lawmakers Wednesday by Secretary of State Mike Pompeo and other top officials.

Democrats have introduced a similar war powers resolution in the Senate, where it faces a steep climb as Republicans hold a 53-47 majority.

Two Senate Republicans, Mike Lee and Rand Paul, announced support for the Senate version, suggesting the vote, as early as next week, could be razor-thin.

The pair emerged from the top-secret briefing saying administration officials provided no acceptable rationale for killing Soleimani or specific evidence of imminent threats against Americans, and took the "insulting" step of discouraging questions about military policy.

"To come in and tell us that we can't debate and discuss the appropriateness of military intervention against Iran? It's un-American, it's unconstitutional, and it's wrong," Lee told reporters.

During House debate, Democrat Ayanna Pressley rejected what many Republicans described as Trump's inherent military authority, and demanded forthrightness from the administration about reasons for sending US troops into battle.

"We cannot allow our country to be lied into another war," she said