Will hold China 'accountable' for what it did to US with Coronavirus, Says Mike Pence

The US is the worst affected country with over 7.5 million cases and more than 2,10,000 deaths. 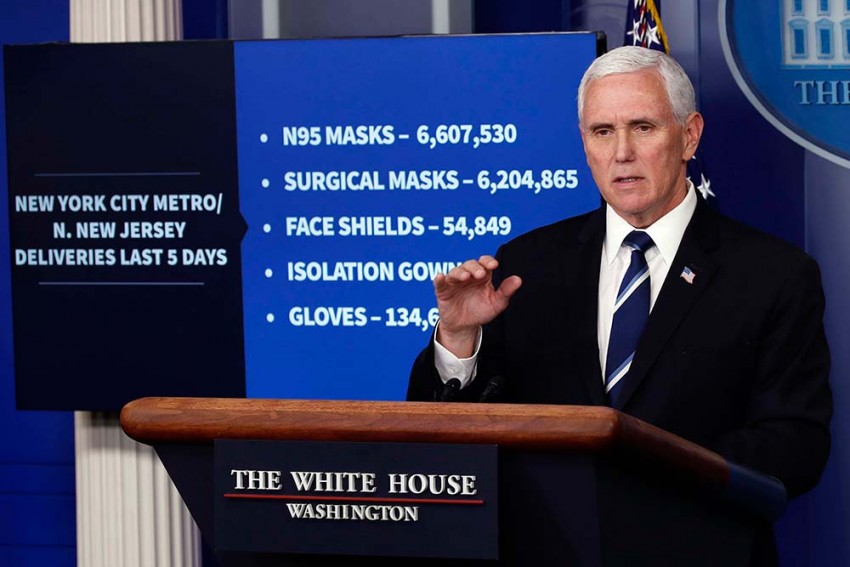 The US Vice President Mike Pence expressed that the Donald Trump administration wants to improve its relationship with China but it is going to hold Beijing "accountable" for what it did to America with the deadly coronavirus.

During the only vice presidential debate with his Democratic Party challenger Kamala Harris ahead of the November 3 presidential election, Pence asserted that China is to blame for the coronavirus.

“We want to improve the relationship but we're gonna level the playing field and we're gonna hold China accountable for what they did to America with the coronavirus,” Pence said during the debate held at The University of Utah in Salt Lake City on Wednesday night.

“President Trump is not happy about it. He's made that very clear. Made it clear again today. And China and the World Health Organisation did not play straight with the American people. They did not let our personnel into China to get information on the coronavirus until the middle of February,” the Republican vice president said.

The coronavirus, which first emerged in China’s Wuhan city in December last year, has so far infected over 35 million people and killed more than 1 million across the world, according to Johns Hopkins Coronavirus Resource Center.

The US is the worst affected country with over 7.5 million cases and more than 2,10,000 deaths.

Pence said that President Trump is "dealing with China from the outset of this administration, standing up to China that had been taking advantage of America for decades in the wake of Biden's cheerleading for China."

Harris alleged that the Trump administration's perspective and approach to China has resulted in the loss of American lives, American jobs and America's standing.

“There is a weird obsession that President Trump has had with getting rid of whatever accomplishment was achieved by President Obama and Vice President Biden. For example, they created within the White House an office that basically was responsible for monitoring pandemics. They got rid of it,” she alleged. Pence immediately said that this is not true.

“There was a team of disease experts that President Obama and Vice President Biden dispatched to China to monitor what is now predictable and what might happen. They pulled them out. We now are looking at 210,000 Americans who have lost their lives,” Harris said.

The American consumers are paying thousands of dollars more for goods because of that failed trade war with China, she said.

“Let's talk about standing. Pew, a reputable research firm, has done an analysis that shows that leaders of all of our formerly allied countries have now decided that they hold in greater esteem and respect (Chinese President) Xi Jinping, the head of the Chinese Communist Party, than they do Donald Trump, the president of the United States, the commander-in-chief of the United States. This is where we are today because of a failure of leadership by this administration,” Harris said.

The Democratic vice-presidential candidate alleged that Trump has betrayed America’s friends and embraced dictators around the world.

“Let's take for example Russia. America's intelligence community told us Russia interfered in the election of the president of the United States in 2016 and is playing in 2020. Christopher Wray, the director of the FBI, said the same.

“But Donald Trump, the commander-in-chief of the United States of America, prefers to take the word of Vladimir Putin over the word of the American intelligence community,” she alleged.

“You look at our friends at NATO. He has walked away from agreements,” she said, adding that walking away from Iranian nuclear deal has put the US in a position where it is less safe because Tehran is building up what might end up being a significant nuclear arsenal.

Pence asserted that Trump kept his word when the US moved the American embassy to Jerusalem, the capital of the state of Israel. And when Biden was vice president, it was promised but it never happened.

“We stood strong with our allies, but we've been demanding. NATO is now contributing more to our common defence than ever before thanks to President Trump's leadership. We've strengthened our alliances across the Asia-Pacific. And we've stood strong against those who would do us harm,” Pence added.