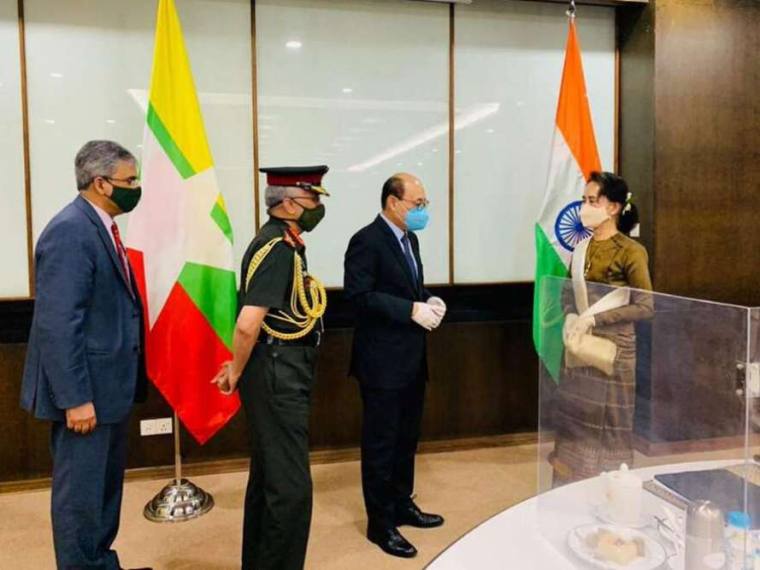 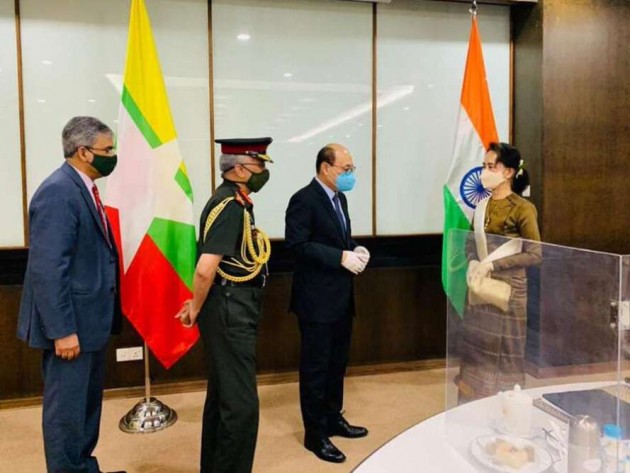 In an unusual move, Foreign Secretary Harsh Shringla is being accompanied by Army Chief General Manoj Mukund Naravane on a two-day visit to Myanmar which started this Sunday. This is the first time that this has happened, perhaps in deference to the cohabitation in Myanmar of the military and civilian regime.

Though Aung San Suu Kyi, Myanmar’s State Counsellor, has appointed a Prime Minister, she is the boss of the civilian administration. The military however remain very much in control and has a significant say in the matters of state. So the Shringla-Naravane joint visit is perhaps aimed keeping in mind the ground reality of the host country. Myanmar is going to the polls next month and Aung San Suu Kyi, despite speculations that she may opt out has decided to contest the elections. But the military will continue to call the shots in Myanmar.

Shringla and Naravane both called on Aung San Suu Kyi and the Commander in Chief of Defence Services General Min Aung Hlaing. During the meeting with Suu Kyi, India handed over 3000 vials of Remdesivir to the State Counsellor, symbolic of India’s commitment to assist Myanmar in its fight against the pandemic. Shringla also promised India’s willingness to prioritize Myanmar in sharing vaccines as and when these become available. Myanmar appreciated India’s decision to provide debt service relief under the G-20 Debt Service Suspension Initiative, for the period up to December 31, 2020.

"The two sides discussed maintenance of security and stability in their border areas and reiterated their mutual commitment not to allow their respective territories to be used for activities inimical to each other. The Indian side expressed their appreciation to Myanmar for handing over of 22 cadres of Indian Insurgent Groups to India.,’’ a press statement released at the end of the visit said.

Conscious of China’s emergence as a major player in India’s neighbourhood, Delhi is now paying much more attention to Prime Minister Narendra Modi’s Neighbourhood First Policy. This was first articulated when Modi first became prime minister in 2014. He won much praise for his decision to give more weight to the neighbours, but much of the initial burst of energy got frittered away as more pressing issues came to the fore. But with China’s shadow looming large over South Asia, New Delhi is thankfully rebooting its neighbourhood policy and paying much more attention to the neighbours.

Though China’s footprints are all over Myanmar, the military and civilian rulers of the country do not want to put all their eggs in one basket. China’s covert support to many of the ethnic groups that have been fighting the Myanmar army has always been a sore point with the military. So building ties with India suits Myanmar as much as it helps India. Both neighbours now have robust political, military and economic and developmental relations.

It was just on October 1 that Shringla had a detailed foreign office consultation with his counter part in Myanmar. Soon afterwards he thought it fit to pay a personal visit to the neighbouring country.

Myanmar is pivotal to India’s security with a 1,640-kilometer border with India’s insurgency hit north eastern region. Myanmar is at the heart of India’s infrastructure projects aimed at connecting the isolated north eastern part of the country, through Myanmar to the thriving economies of the ASEAN group. The Look East policy of Congress Prime Minister Narasimha Rao, now renamed Act East by Modi, hopes to bring development to the north east through connectivity with ASEAN. Prime Minister Modi too has embraced this concept of development of the north eastern region through Myanmar to Asean as a mantra for the eastern frontier states.

The trilateral India-Myanmar-Thailand Asian highway and the Kaladan-multi-modal transit transport projects are part of the two big ticket connectivity projects India is building in Myanmar. Kaladan hopes to connect the Kolkata port with the Sittwe deep water port in Myanmar’s troubled Rakhine state by sea. Sittwe port had already been developed and modernised by India, but the land connections remain to be completed. Kaladan when conceived during the Vajpayee years seemed an excellent idea. But the difficult terrain as well as the fact that much of the area is not under Myanmar army’s control led to frequent halts with Burmese insurgent groups often disrupting work. But by next year the Sittwe port is expected to be operational.

According to a status report placed by foreign minister Jaishankar on the trilateral highway in Parliament, India has undertaken two projects in Myanmar under this. One starts from Moreh in India’s Manipur state to Mae Sot in Thailand through Myanmar. Then there is bringing the 120 Km Kalewa-Yagi road sections to highway standards and upgrading 69 bridges and approach roads on the Tamu-Kyigone-Kalewa road section of 150 Km.

The work on 69 bridges including approach roads in the Tamu-Kyigone-Kalewa section (TKK) of the Trilateral Highway was held up after the contractor was terminated in December 2018 due to unsatisfactory performance. There have been plenty of such hiccups during the construction both on the Indian side in Manipur and in Myanmar. But now some of this has been sorted and work on the first bridge between Moreh and Tamu (Myanmar) is expected to start soon. The remaining 68 bridges will be taken up separately after revising the technical and cost parameters, Jaishankar said.

The Kalewa-Yagi road section is among the most challenging of the stretches of the Trilateral Highway with steep gradients and sharp curves. The construction of this road is underway and around one-fourth of the road has been completed, the foreign minister said.Once Kaladan and the trilateral highway is operational, Delhi’s hopes to transform its north eastern region.

With both these projects taking a long time to complete, India is now concentrating on smaller ones that are much more easily deliverable. India’s development work under the Rakhine State Development Programme (RSDP) on agriculture and skill development are of this nature. India announced a grant of USD 2 million for the construction of the border haat bridge at Byanyu/Sarsichauk in Chin State that will provide increased economic connectivity between Mizoram and Myanmar.

Modi, Xi To Face Each Other For First Time Since Border Standoff In Ladakh At BRICS Virtual Summit On November 17