The leaders traded brief remarks about issues they planned to discuss when a reporter shouted if US President Donald Trump would tell Russian President Vladimir Putin 'not to meddle' in the 2020 election. 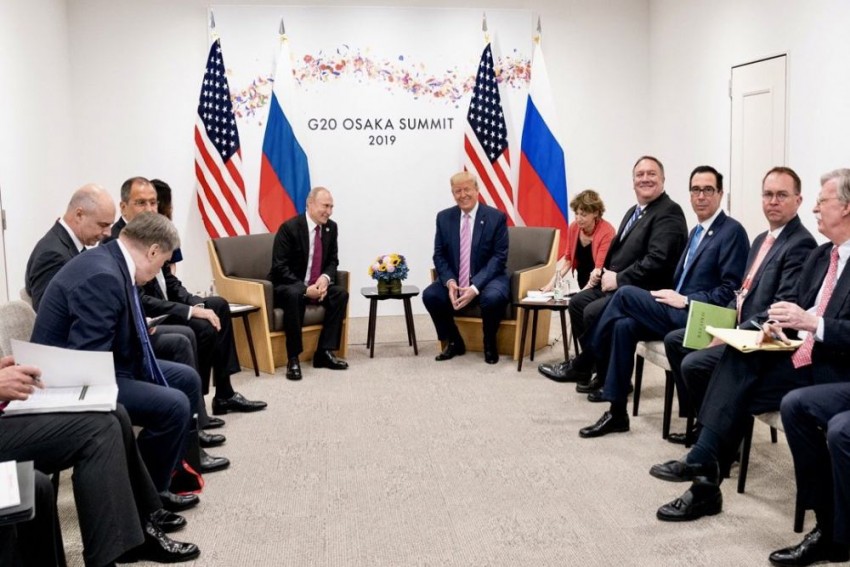 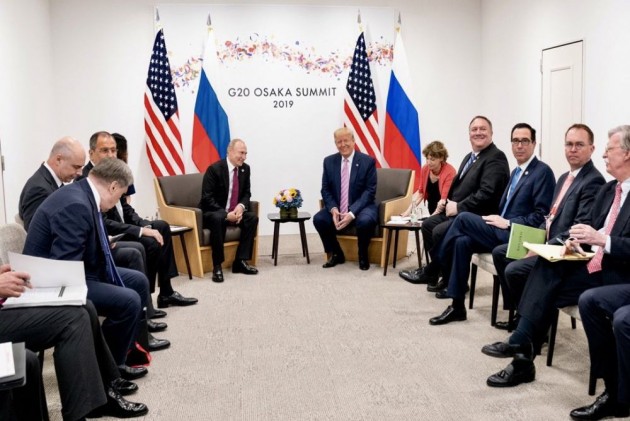 President Donald Trump came face to face with Russia's Vladimir Putin on Friday for the first time, since the special counsel found extensive evidence of Russian interference in the 2016 US election.

When asked if he would warn Russia not to meddle in the next election, Trump wore a bit of a smile, pointed his finger at Putin and dryly said: "Don't meddle in the election, please."

The tone of the president's comments was immediately open to interpretation, but would seem to do little to silence questions about Trump's relationship with Russia in the aftermath of special counsel, Robert Mueller's conclusion, that his campaign did not collude with Russia in 2016.

Their meeting in Japan was the first time, the two sat together publicly since their summit in Helsinki nearly a year ago, in which Trump pointedly did not admonish Putin over election interference and did not side with U.S. intelligence services over his Russian counterpart.

The leaders traded brief remarks about issues they planned to discuss when a reporter shouted if the president would tell Putin "not to meddle" in the 2020 election.

The president answered "Of course I will," before he turned to Putin and said, "Don't meddle in the election, please." He playfully repeated request.

The meeting with Putin, which came amid a gauntlet of negotiations on international crises, trade wars and a growing global to-do list, was the main event on Trump's agenda Friday at the G20 summit in Osaka.

But the president also kept an eye on the race to replace him back home, where 10 Democrats met in Miami as part of the first debates of the 2020 presidential race.

"I just passed a television set on the way here. I saw that health care and maximum health care was given to 100% of the illegal immigrants coming into our country by the Democrats," Trump said, telling German Chancellor Merkel, that a debate the previous night "wasn't very exciting." "So I look forward to spending time with you rather than watching," he said. Merkel did not react.

Trump had said in advance of his meeting with Putin, that he expected a "very good conversation" with the Russian leader but told reporters that "what I say to him is none of your business."

His aides had grown worried that Trump could use the meeting to once again attack the Russia probe on the world stage, particularly since Mueller recently agreed to testify before Congress next month, he did not utter the special counsel's name.

Senate Democratic leader Chuck Schumer had pressed the president to directly challenge the Russian leader on election interference and send a signal "not merely to Putin but to all of our adversaries that interfering with our election is unacceptable, and that they will pay a price — a strong price — for trying."

The United States and Russia are also on opposing sides of the escalating crisis with Iran, which shot down an American drone last week. Trump nixed a possible retaliatory air strike, and stressed on Friday that the "there's no rush. There's absolutely no time pressure" to ease the tension with Tehran.

The Mueller report did not establish a criminal conspiracy between Trump associates and the Kremlin to sway the outcome of the election. The finding lifted a cloud over the White House even as tensions have increased between Washington and Moscow. While Trump has long placed a premium on establishing close personal ties with Putin, his government has increased sanctions and other pressures on the Russian government.

At a summit last November in Argentina, Trump canceled what would have been the leaders' first post-Helsinki meeting, after Russia seized two Ukrainian vessels and their crew in the Sea of Azor. Those crew members remain detained, yet Trump has opted to forge ahead with the Osaka meeting, which will likely include discussions about hotspots in Iran, Syria and Venezuela, as well as nuclear weapons.

Trump said Friday alongside Putin that the fate of the sailors had yet to be discussed.

Indian IT Contractor Charged With Insider Trading, Securities Fraud In US, To Pay USD 800,000 In Penalties