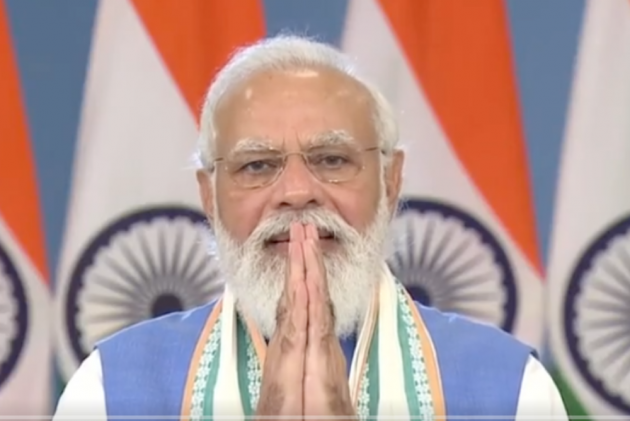 "For almost two years now, humanity is battling a once in a lifetime global pandemic. Our shared experience of fighting the pandemic has taught us - we are stronger and better when we are together," he said in a video message.

The Global Citizen Movement uses music and creativity to bring the world together.

Music, like sports, has an inherent ability to unite: PM @narendramodi

He said the world saw glimpses of this collective spirit when the COVID-19 warriors, doctors, nurses, medical staff gave their best to defeat the pandemic.

"We saw this spirit in our scientists and innovators who created new vaccines in record time,” he said, adding that generations will remember the manner in which human resilience prevailed over everything else.

However, the PM also warned of the looming threat of climate change upon the world, stressing on the importance of lifestyle and conscious choices in fighting the impending catastrophe.

Addressing the global audience, the PM said that the simplest and most successful ways to mitigate climate change is to lead lifestyles that are in harmony with nature.

"The threat of climate change is looming large before us. The world will have to accept that any change in the global environment first begins with the self,” Modi said.

"The great Mahatma Gandhi is widely known for his thoughts on peace and non-violence but do you know that he is also among the greatest environmentalists of the world,” Modi said.

He added that Gandhi led a zero-carbon footprints lifestyle.

"In whatever he did, he put the welfare of our planet above everything else," Modi said emphasising that Gandhi highlighted the doctrine of trusteeship "where we all are trustees of the planet with a duty of caring for it."

Modi told the global festival that today India is the only G-20 nation that is on track with its Paris commitments.

"India is also proud to have brought the world together under the banner of the International Solar Alliance and the Coalition for Disaster Resilient Infrastructure," he said, underscoring that "we believe in the development of India for the development of the humankind."

He also said that poverty cannot be fought by making the poor more dependent on government, emphasising that poverty can be fought when the poor start seeing government as trusted partners who will give them the enabling infrastructure to forever break the vicious circle of poverty.

Modi said that even as the world is battling the COVID19 pandemic, other challenges remain and among them, the most persistent of the challenge is poverty.

"When power is used to empower the poor, they get the strength to fight poverty,” he said.

Global Citizen Live is part of a day of unity across seven continents, to be broadcast over 24 hours around the world. Prince Harry and Meghan, The Duke and Duchess of Sussex, will join Global Citizen Live on the Great Lawn of Central Park in New York City to continue their work with world leaders in pursuit of global vaccine equity, announced international advocacy organization Global Citizen.

Modi also told the global audience that India’s efforts include banking the unbanked, providing social security coverage to millions, giving free and quality health care to 500 million Indians. He said about 30 million houses have been built for the homeless in India’s cities and villages. “A house is not only about shelter, a roof over the head. It gives people dignity.”

He said another mass movement taking place in India is to provide drinking water connection to every household, for several months last year and now free food grains have been provided to 800 million of India’s citizens. “These and several other efforts will give strength to the fight against poverty.”

Addressing the “young and energetic gathering”, Modi said the Global Citizen movement uses music and creativity to bring the world together.

“Music, like sports, has an inherent ability to unite,” he said adding that music has a calming impact on people’s lives and it calms the mind and entire body.

“India is home to many musical traditions. In every state, in every region there are many different styles of music. I invite you all to come to India, and discover our musical vibrancy and diversity,” Modi said.

Modi concluded his address by quoting the Rig Veda and said “let our minds be in agreement… let us have a shared purpose.”

“Let us pray for such unity and let us have shared intentions and aspirations that unify us all.

“Friends what can be a greater manifesto for a global citizen than this. May we keep working together for a kind, just and inclusive planet."