The tankers were struck in the same area where the US accused Iran of using naval mines to sabotage four other oil ships in an attack last month, reports say. 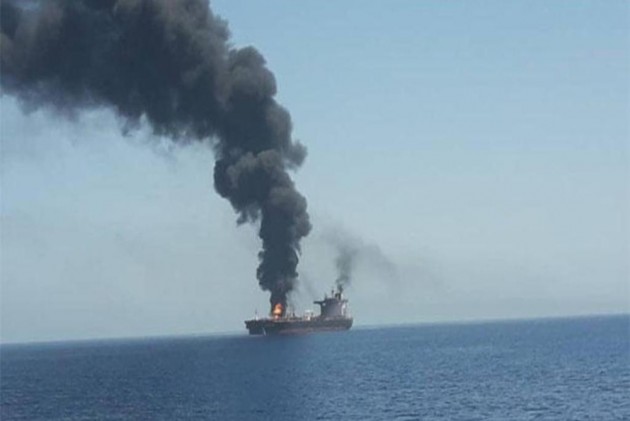 Two oil tankers were hit in a suspected attack in the Gulf of Oman on Thursday and all crew members on board were evacuated, the media reported.

The tankers were struck in the same area where the US accused Iran of using naval mines to sabotage four other oil ships in an attack last month, reports say.

The Iranian media said the two tankers departed from the port of Abu Dhabi, capital of the United Arab Emirates (UAE). The ports of Pakistan and Oman both received the distress calls from the oil tankers, Xinhua news agency reported.

One of the ships was a Norwegian-owned Front Altair. The Norwegian shipping company Frontline confirmed that its oil tanker was on fire after an incident in the Gulf of Oman, Norwegian newspaper VG reported.

The ship, which was built in 2016, had set sail from the Emirati port of Ruwais late on Tuesday and was set to arrive at the Taiwanese port of Kaohsiung on June 30. It is believed that the vessel had been loaded with oil in Abu Dhabi before setting off on its journey, the National daily reported.

The second vessel was identified as the Panama-flagged Kokuka Courageous.

There was no official confirmation of how the vessels were attacked or who was responsible.

The Iranian Navy rescued 44 crew members from the two tankers after the "accident" in the Sea of Oman on Thursday, official IRNA news agency reported.

The rescuers of Iran's coastal province of Hormozgan found the crews and took them to Jask, a city of Hormozgan, IRNA quoted a source as saying.

The US 5th Fleet nearby assisted the evacuation of the crew, Al Arabiya said.

The incident comes amid the rising tension between the US and Iran. Washington withdrew from the Iranian international nuclear deal in mid-2018 and re-imposed full sanctions on Iran's oil exports.