Windies Get Down To Business

Gayle's enterprising 83 and Ganga's sedate 64 not out see the hosts reach a strong 207-1 on a truncated opening day. 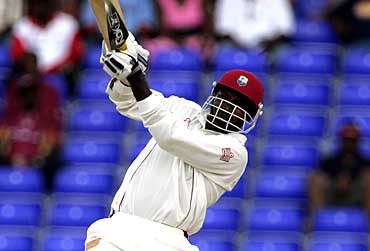 Contrasting half-centuries from Chris Gayle and Daren Ganga gave the West Indies a solid start on a truncated opening day of the third Test against India on Thursday.

Prolific opening batsman Gayle cracked an enterprising 83 while his partner Ganga made a sedate 64 not out to see the hosts reach a strong 207 for one at the Warner Park stadium.

Ramnaresh Sarwan was unbeaten on 34 at the other end.

The Indians succeeded somewhat in curtailing the West Indian run flow that came at exhilarating pace till Gayle was at the crease.

Gayle struck three sixes off Harbhajan Singh and two off Sreesanth besides eight boundaries in his 127-ball knock to give his side a flying start after captain Brian Lara elected to bat on a benign track.

The cavalier batsman's fireworks came after the start was delayed by 2-1/2 hours due to a wet outfield caused by overnight rain.

When play finally got underway, the tall left-hander latched on to Sreesanth, first smashing him down the line for a four and then hoisting him over long on for a massive six.

There was a brief interruption with only eight overs into the West Indian innings when passing clouds forced the covers on.

On resumption, Gayle continued from where he left.

He picked Sreesanth once again for some rough treatment, lofting him in the straight for another six.

The Jamaican then turned his attention to off-spinner Harbhajan who was playing his first Test of the tour.

Gayle clubbed the 'Turbanator' over long on and long off for two sixes in one over.

He reached his 25th Test fifty with a straight driven four off Harbhajan and followed it up with a flat six to long on off the bowler's next over.

The right hander has so far played 187 balls and struck six fours.

Sarwan started off well with two boundaries off the fast bowlers before Anil Kumble placed doubts in his mind with his variations.

By stumps, he has batted 79 deliveries and hit eight boundaries.

Gayle's dismissal came against the run of play when he offered no shot to an in-swinging delivery from Patel from around the stumps.

The scoring rate slowed down considerably after Gayle's departure.

With Ganga under pressure to prove himself on recall and Sarwan keen to get back his form, runs came in a trickle.

The 50 runs for the partnership consumed 129 balls and that of Ganga's innings 142 deliveries.

Earlier, India made two changes in the line-up with Harbhajan and Sreesanth coming in place of VRV Singh and Irfan Pathan.

West Indies made one change from the team in the second Test with Marlon Samuels replacing Ian Bradshaw.