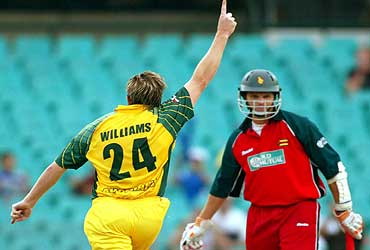 Right-arm pacer Brad Williams ripped Zimbabwe apart to give Australia a huge 99-run victory in the second one-day international of the triangular tournament at the Sydney Cricket Ground today.

Williams (5-22) claimed his career's second five-wicket haul as Australia, restricted to 225 for eight, bundled out Zimbabwe for 126 in 37.3 overs to record their second victory in as many matches in the tri-series.

The Zimbabwe chase was never on after Williams wrecked the top order with four for 12 from four overs in a devastating new ball spell.

Skipper Heath Streak (46) and Tatenda Taibu (29) put on 73 runs for the sixth wicket which lifted Zimbabwe from 17 for five to 90 for six when the latter was caught behind off Ansrew Symonds.

The win gave the world champions maximum six points, pushing them atop the table with 11 points. India, the third team in fray, have one point after losing to Australia in the opening match on Friday while Zimbabwe have none.

Earlier, Sean Ervine picked 3-53 and was well supported by Andy Blignaut (2-21) and Grant Flower (2-42) as Zimbabwe came up with a tidy bowling performance to restrict Australia to a modest total.

Australia were at one stage 118 for five but recovered through a 66-run sixth wicket stand between Symonds (42) and Micheal Clarke (40).

Man-of-the-match Williams, who had impressed in the tri-series in India, justified his selection ahead of express fast bowler Brett Lee with his superb control of swing and seam.

He first removed Stuart Carlisle when the right hander edged to Matthew Hayden at first slip with only two runs added to the Zimbabwe scoreboard.

The Western Australian then took a fine catch at fine leg to send off Vusi Sibanda, Jason Gillespie being the bowler. Williams then struck a double blow, first having Flower (0) plumb in front and then Stewart Matsikenyeri caught by wicketkeeper Adam Gilchrist.

But he reserved his best for Mark Vermeulen (5) who was beaten all ends up by a sharp incutter to leave Williams with astounding figures of 4-2-12-4.

The Africans then needed the calming influence of their captain Streak (46) and diminutive wicketkeeper Taibu (29).

The two batsmen survived with some cheeky shots, their runs mainly coming from behind the square through edged hooks and glides.

The Aussies too allowed things to drift for a while with overthrows and extras.

Ponting then dropped Streak off Andy Bichel, although the error did not prove costly in the end.

The introduction of part-time bowler Symonds then did the trick as his fastish off-spin induced a faint edge from the 20-year old Taibu and Gilchrist snapped it without a fuss.

Ervine was foxed by the guiles of Symonds who beat the left hander with his change of pace for a top edge catch to Ponting.

Streak seemed to have realised the futility of his resistance. He came out to left-arm spinner Clarke but failed to connect his shot and Gilchrist effected the stumping that was upheld by the TV umpire.

Gillespie and Williams then returned to polish off the last two wickets.

Earlier, the Aussies never looked comfortable batting on a slow Sydney Cricket Ground track where the ball gripped the surface from the very beginning.

Zimbabwe were so immaculate with their line and length that the usually aggressive Australian batsmen could only score 60 runs in the first 15 overs.

At one stage they failed to hit a boundary between the 22nd and 41st over.

The openers - Gilchrist (34) and Hayden (14) - made a scrappy start to the innings after skipper  Ponting won the toss and elected to bat.

The duo put on 42 runs in the first 10 overs before Hayden was castled by skipper Streak.

Australia kept losing wickets at regular intervals and were forced on the back foot when half their side was back in the pavilion with just 118 runs on the board.

But one-day specialist Symonds (42), man-of-the-match in the opening encounter against India at Melbourne, and Clarke (40) once again came to Australia's rescue.

They added added 66 runs in 99 balls before falling in quick succession to Ervine, trying to force the pace.