Perhaps the right question to ask is: help who? The economists may be sceptical about its effects in the long run, but the political analysts are clear: it would help in elections. And they seem imminent: in the very short-term 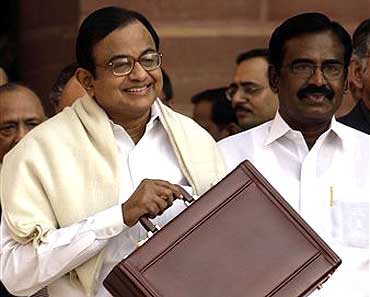 On the face of it, it should be seen as a bold move. It is easily the single largest loan-waiver--"estimated at Rs.50,000 crore and the OTS relief on the overdue loans is estimated at Rs.10,000 crore"-- ever in the history of India. And perhaps nobody--not even the most hard-hearted of market-economists--would dispute that something needed to be done urgently for the distressing situation of the debt-entrapped farmers, for whom this loan-waiver has ostensibly been announced.

Predictably, most economists and the establishment-wallahs are divided. But there is no such confusion in the minds of the Congress party members. Most find it difficult to hide their glee. For they think the FM has delivered a political master-stroke which they perceive to be a sure-shot electoral trump-card.

However, not everyone is so gung-ho. The FM himself was frank enough to admit, at the very outset, that the committee appointed under Dr. R. Radhakrishna to examine all aspects of agricultural indebtedness, while making a number of recommendations, had "stopped short of recommending waiver of agricultural loans".

But the FM has boldly gone ahead and positioned himself and his party as "sensitive to the difficulties of the farming community, especially the small and marginal farmers". For it is easy to play Political Robinhood, for you know that the proposals just can not be opposed by any political party. The farmers are as big a constituency as the one for "quotas" and reservations --and we all know how all the political parties reacted once the proposals had been announced. The FM, when pressed at the press conference later, said so much by pointing out that those who are opposed to the proposal should stand up and be counted.

Predictably, nobody has. Even the BJP, and other opposition members, have been content to say that this is too little, too late, or that the government is being politically expedient. Even the government's allies, the Left among them, find themselves in a bind. For they would not want to be seen as anti-farmer and yet they would know that the Congress could stand to gain at their expense particularly in Kerala, West-Bengal and Tripura.

But before we come to what is wrong with the proposals, let's first take a look at what they are. The following is the relevant extract from the FM's speech on Debt Waiver and Debt Relief:

(i) All agricultural loans disbursed by scheduled commercial banks, regional rural banks and cooperative credit institutions up to March 31, 2007 and overdue as on December 31, 2007 will be covered under the scheme.

(iii) Agricultural loans were restructured and rescheduled by banks in 2004 and 2006 through special packages. These rescheduled loans, and other loans rescheduled in the normal course as per RBI guidelines, will also be eligible either for a waiver or an OTS on the same pattern.

(iv) The implementation of the debt waiver and debt relief scheme will be completed by June 30, 2008. Upon being granted debt waiver or signing an agreement for debt relief under the OTS, the farmer would be entitled to fresh agricultural loans from the banks in accordance with normal rules.

In an answer to a question, at his post-budget press-conference, when asked pointedly how the budget seeks to help those farmers who, instead of taking loans from a commercial bank, may be indebted to local money lenders, the FM was unambiguous: "It doesn't". And there-in lies the rub, say those who have studied the problem of agricultural debt, particularly in those areas which have been in the news because of recent cases of suicides and farmers caught in a vicious debt-trap. In addition, some of the following obvious questions too perhaps need to be answered when we examine the proposed scheme:

As a preamble, the FM had said that he had " carefully weighed the pros and cons of debt waiver and ... taken into account the resource position", but it remains as yet unclear as to how exactly the government intends to fund the scheme for there is no provision in the budget, nor is there any indication as to what it would do to the fiscal deficit.

On his part, when pressed, the FM said in the press-conference, that he should be credited with at least sufficient intelligence to have thought through the proposal and its after-effects. He said that he was confident of providing " liquidity to the banking system, in a period of three years, equivalent to the amount that has been written off" and that he was taking a three year period into account only because the banks in any case would have budgeted for the money not being recoverable till the loans were due.

There has long been some consensus among experts that what is needed is a total overhaul of the credit mechanisms for small and marginal farmers, and that the distressing figures of farmers' suicides can only be controlled by an overall review of agricultural practices. But the supporters of the FM's scheme claim that even if it does not act as a panacea to the farmers' problems, at least it is one step in the right direction for something needed to be done, and that it had to be done in the very short term, for aren't we all, quoting Keynes, dead in the long run?

Whether or not it benefits all indebted farmers, by specifying June 30 as the date by which these write-offs have to be effected, the FM has sent out a clear signal that the elections could be announced anytime after the monsoons. Political analysts, though, would point out that elections have already been announced. Given the orchestrated celebrations by rounded-up "farmers" outside 10, Janpath being telecast on TV channels, one thing is clear: the party clearly has budgeted for an electoral windfall.