Will Ballots Win Over Bullets?

Can Pakistan polls be serious? The answer is yes, and no, and maybe. An electorate hungry for change could bring peaceful transition and determine the country's fate 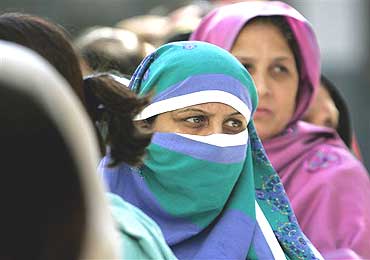 After Pakistan’s long-delayed parliamentary election it’s not hard to predict how observers will introduce their reports on the country’s charged political scene.

Most will likely begin: "Conditions conducive to holding free and fair elections were sharply constrained by government manipulation of political processes." A long list of government-inflicted wounds will follow: media restrictions, subversion of judicial prerogative, arrests of lawyers and political party workers, campaign bias toward favored parties and the violation of fundamental rights protections for voters.

No doubt these reports will also detail a tragically dangerous security environment that now colors all of Pakistan’s politics and certainly these elections: border conflicts that pit Pakistan’s armed forces, sub-nationalist militants, religious extremists and tribal leaders against one another; the ever-present specter of global terror; and suicide bombings so frequent that the US intelligence chief now wonders aloud whether the state can survive. It’s hard for the electorate to tell whether these cumulative conditions are the cause or the consequence of a compromised political system. Pakistan’s president, General Pervez Musharraf, seems to interpret terrorism as a circumstance that justifies the indignities of this election year and the grudging election as a way to excuse them.

Welcome to Pakistani political roulette, where the stakes are high, expectations are low, and the whole system is, to say the least, imperfect. The government claims to be able to ensure security; major parties are participating, even while complaining; and observers--some, no doubt, armed with guards and Kevlar vests--are closely watching the game.

Can these polls be serious? The answer is yes, and no, and maybe. Following a year of political tragedy, the 2008 elections could reinforce the worst habits of a limping praetorian state, or help turn the political tide toward constructive civilian rule, or signal the end of an era premised on political patronage that has, in a way, lasted almost six decades.

Some among Pakistan’s politicians have chosen to boycott these elections precisely because the fraught electoral environment reflects all the inequities of Musharraf’s brazen manipulations; some will participate simply because staying out now means losing a chance to wield power later. And others, trying to meet the challenges of a fragmented state head on, have decided that only an election can provide the ballast to dismantle military rule by reinstating judges, reducing the power of the army and correcting the entrenched corruptions of its beneficiaries. Whether the result is good enough for Pakistanis to trust a desperately needed transfer of power remains an open question.

These are burdens that a simple election rarely must shoulder--except in Pakistan. Twice before, an elected parliament tried to untangle the excesses of military rule; twice before, this burden has fallen on the Pakistan People’s Party, which failed by confronting the army. Its successor, the Pakistan Muslim League, also failed--first by accommodating the military and then by trying ineffectively to do an end run around it.

The political costs of this election are particularly high--not only because parties are weak, but also because dismantling the military-led economy is only one piece of a strategic puzzle created by terror from within and from without. Once the self-proclaimed guardians of the state, Pakistan’s army now presides over a country forced to the edge of war against itself. Everything is contested: the means and ends of ideology, the limits of Islamism, the rules of constitutionalism, the contours of the federation and the meaning of citizenship have all been compromised in an environment where the state can easily give the impression that it fights for its life.


This fundamental political instability is the reason that Pakistan’s politicians have been flocking to Washington. Some seek protection, other sound alarms. The late Benazir Bhutto, for example, claimed that the PPP’s loss would be proof of pervasive electoral fraud, citing government interference that her party could anticipate but not stop. She might have been right, although her party has since backed away from such assertions. Others, including Imran Khan, leader of a small, boycotting party, has raised fears that Pakistan could splinter after these polls, as Kenya seemed to do when its recent elections exposed deep ethnic fissures.

Both predictions are probably overstated, but they illuminate a burdened history and real worries for the security of the state and its citizens. At one and the same time, they highlight concerns about the legality of the conduct of this election, the validity of its outcome and, ultimately, the legitimacy of the polls themselves.

All are at risk. Although Pakistan’s vulnerabilities are periodically expressed in regional or ethnic terms, these are all symptoms of a problem that is, at base, deeply political. It’s easy to blame the military for appropriating the state for its own strategic--and occasionally self-enriching--purposes, but Pakistan’s woes exhibit far more profound effects of authoritarianism. The absence of democracy has made it almost impossible for the legal system to provide a framework for civic participation in political life. It has interrupted economic development, inhibited the rise of a middle class and pitted clans, tribes, provinces, classes and parties against one another. Calculation and tactical action have too often overtaken the simple notions of the common good and robust civil society--which includes secularists and Islamists, capitalists and socialists, landlords and petty bourgeois. Internal war--even metaphorical fighting--has disrupted a society in sharp transition; today, ideologues and militants are gaining the ground once reserved for tribal chiefs and feudal landlords, and none accurately reflect the citizenry.

And that brings us to this election. Under civilian and military rulers, Pakistan’s parliaments have been weak links in a tangled institutional chain. Participatory politics doesn’t automatically breed representative government, and surely not in Pakistan--at least, not yet. Were fully open elections held--with the free debate that was not possible last year--the result could be a raucous, divided and fascinating legislature. The army and the president, for whom political uncertainty is an inevitable provocation, would no doubt view this parliament as an invitation to instability in conditions of rising militancy. And in a different way, it would be a challenge to Pakistan’s old leaders and habitual politicians, whose comfortable compliance with authoritarian customs has eroded the institutions they have inhabited for decades and trumped Pakistan’s sadly erratic democratic aspirations.

This doesn’t mean that these disparate groups are conspiring to defraud Pakistan’s voters. But it does mean that it’s worth paying respect to Pakistan’s voters by closely examining this election. Late last year, just before Benazir Bhutto’s assassination, the Bush administration concluded that a flawed election in Pakistan might be good enough. Pakistani voters, like candidates who risk their lives to campaign each day, already know just how imperfect the electoral environment has been.

Even if polling day is perfect, Pakistan’s underlying political problems remain. They won’t be fixed until Pakistan takes a step toward participatory democracy--and the international community values Pakistan’s voters enough to expose electoral weaknesses and point the way toward their correction. Only then can Pakistan’s voters decide whether to invest this process, incomplete and flawed though it may have been, with legitimacy. The rest of us need to bear witness to their struggle.

Paula Newberg has covered Pakistan’s politics for almost three decades and is the author of  Judging the State: Courts and Constitutional Politics in Pakistan. Rights: © 2008 Yale Center for the Study of Globalization. YaleGlobal Online