Feroze Gandhi did not indulge in demonstrations in and out of parliament. He used to argue his case, backed by massive information and relevant statistics. 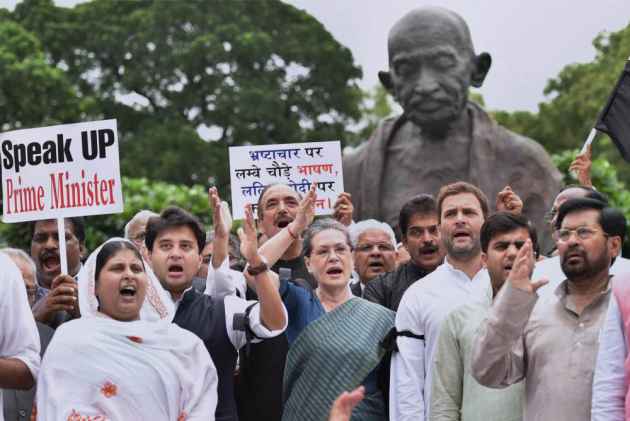 The monsoon session of the Parliament was washed out because Rahul Gandhi imitated BJP, when it was in opposition, instead of following his grand-father, Feroze Gandhi. Avoiding debating the controversial issues in the parliament, Rahul, like BJP, wasted whole time in blocking the proceeding.

Feroze Gandhi did not indulge in demonstrations in and out of parliament. He used to argue his case, backed by massive information and relevant statistics. Early in his career as an MP, he made his name by exposing the malpractices in the then insurance companies, which were in private hands. Books were cooked and bankruptcies were rampant. Feroze Gandhi reeled out statistics along with the lurid and mysterious details of the dubious transactions. The House was stunned and the government could not delay action. The insurance business was nationalised and Life Insurance Corporation was formed.

But Feroze did not rest on his laurels. He was always vigilant. Joining hands with Ram Subhag Singh, he caught the then Finance Minister T. T. Krishnamachari unawares.  Feroze had collected vast data, which established the fact that Mundhra from Calcutta had successfully managed to artificially raise the price of the shares of his companies before the purchase by the LIC, which had favoured this individual. TTK denied any wrong doings. The Government was forced to appoint a Commission of inquiry, headed by Justice Chagla, who declared that TTK should take constitutional responsibility. TTK tendered resignation.

Feroze was a member of the ruling Congress party but did not hesitate exposing the wrong doings, which might embarrass the government of his own party and Prime Minister Nehru, his father-in-law. He was not hand in gloves with any opposition party and did not conspire to build his own group either. He was, in a way, a lone wolf.

Feroze was not in the habit of disrupting the parliament or making childish statements, with which we are festered these days. Whenever he stood to speak or move a motion, the whole House listened with rapt attention. He did not rush to the well of the House or stage some silly demonstrations outside the parliament.

The law about libel had not been changed even after the British Raj was over. Feroze got it changed. Thus, it was because of him that the journalists could report the parliamentary proceedings freely without the sword of defamation hanging over them. For all these remarkable achievements Feroze did not take a sabbatical for two months and skip the budget session of the parliament.

Instead of demanding resignation or dismissal of the minister concerned, if Rahul had provided solid proof, the minister would not have had any option other than resigning. Rahul should have emulated the example of his grandfather. However, to do so, one has to study, collect and analyse the information. Rowdy behaviour may get the headlines, but it does not solve any problems or inspire public confidence. A diligent discussion does.  Sadly, all parties have failed to put the national interest first.

It is not difficult to put the government in a tight spot. When the UPA government was in power, the present BJP leadership was bent upon opposing the nuclear deal and various projects sponsored by the government. Jaitley defended the disruption and boycott as the vital part of the parliamentary procedure. Now that the tables have turned, BJP is rushing to steal the credit by implementing those very projects it had vehemently opposed, sometimes under different names.

Now the Congress is in opposition. It is following BJP's acrimonious path of not respecting parliamentary procedures.

The first Prime Minister, Nehru, his colleagues and also the then opposition parties consciously nurtured the parliamentary spirit.  But after them, unfortunately, it slowly eroded. Today the government cannot move forward because it does not have any relations with the opposition. The current prime minister's presence is felt by his continuous absence in the House.

Though agriculture can make great strides, the country cannot move ahead without industrial growth. Hence, land acquisition cannot be avoided. If the opposition has any objections to the methods of acquisition, then discussion in the Houses is the remedy, not blocking the debate. Congress had long ago given the slogan - Garibi Hatao. This objective can be achieved, if agricultural growth is backed by vigorous expansion of industry, creating more jobs. They are not antagonistic to each other.

Political atmosphere is full of strife. Modi might be confident of winning some state elections but he must remember that slogans do not fool people all the time, neither do they get the work done. Without naming Modi, Mr. Atal Bihari Vajpayee had asked him to keep in mind that those in power should be aware of the Rajdharm and should not cross the Lakshman Rekha.

This should be remembered by politicians of all hues.