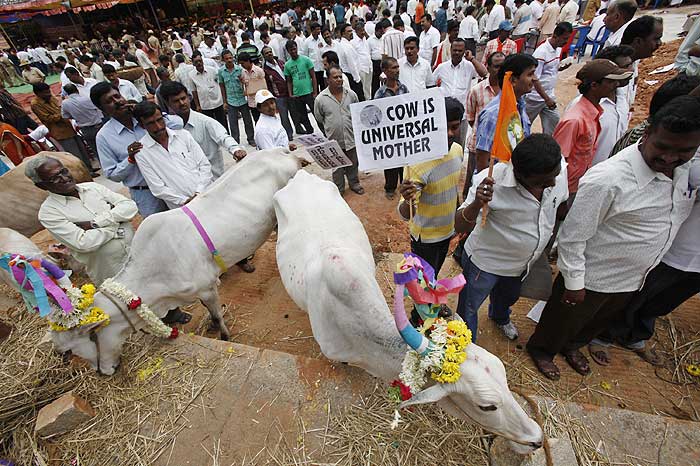 With the gruesome murder at Dadri, many today are invoking Gandhi on cow slaughter. It is true that Gandhi never supported a ban on it. He said in July 25, 1947: "In India no law can be made to ban cow-slaughter." He is very categorical about this. But at the same time he pledges 'to serve the cow'.

Let us read: "I do not doubt that Hindus are forbidden the slaughter of cows. I have been long pledged to serve the cow but how can my religion also be the religion of the rest of the Indians? It will mean coercion against those Indians who are not Hindus. We have been shouting from the house-tops that there will be no coercion in the matter of religion. We have been reciting verses from the Koran at the prayer. But if anyone were to force me to recite these verses I would not like it. How can I force anyone not to slaughter cows unless he is himself so disposed?"

He cannot force another person to serve the cow and not slaughter it, "unless he is himself so disposed". By assuming or expecting another person to on his own ('himself be so disposed') want to serve the cow, Gandhi places the service to the cow as something we should all aspire for. There is an expectation that others should on their own worship the cow. Gandhi used to say that "protection of the cow is a primary duty for every Indian". It is a beautiful expectation, uncoerced and lucid — but an expectation by a majority community. Those not so disposed on their own get graded lower on Gandhi's moral scale, notwithstanding Gandhi's philosophical dislike for judging or grading anyone.

Yet I will not already claim that Gandhi opens the way for the Hindu fanatic to then do communal politics. That would be facetious. Taking him on his own ground, we find that he does not challenge the practice of categorising a legitimate food habit of a lot of people as 'cow slaughter' (even though it of course technically involves 'slaughter'). Gandhi could have asked if we ever want to describe vegetarianism as plant-slaughter, or fish-eating as fish-slaughter! Then what makes beef-eating 'cow-slaughter' or 'gau-hatya'?

Slaughter or 'hatya' does not have a positive connotation. In refusing to challenge this framing, Gandhi contributed to the feeling that cow-slaughter is a deep violation of something fundamental to Indian society. Gandhi makes the question of whether the Hindu is tolerant or resorting to force the key issue. But that is immaterial, since either ways non-Hindus are already morally castigated. Attributing the morally degrading quality of a 'slaughter' to the food habits of millions of Indians meant that these habits now would appear as morally repulsive to the Hindu.

In Gandhi's formulation the Hindu now is set to become this pure pious person out to suffer this transgression of his core religious belief and yet be endlessly generous and truth-seeking and forgiving (satyagrahi) to not be driven to use force.

Persisting with the use of 'cow slaughter', Gandhi castigates Hindus who are engaging in it: "In villages Hindus make bullocks carry huge burdens which almost crush the animals. Is it not cow-slaughter, albeit slowly carried out?" Gandhi's intention is here to supposedly expose the double standard of Hindus who want a ban and still practice lesser forms of cow-slaughter. Of course, Gandhi would not allow for a ban even if all such double standards were to end and Hindus completely stop these indirect means. Yet he again reinforces the negative framing of a food habit as cow-slaughter by equating a traditional habit with those killing a cow for commercial gain.

Gandhi's perspective of course is unique. He is not calling for valuing the life of the cow over that of a human being. But, in a twist, he makes protection of the cow the way to be really serious about upholding human life! His logic is: if you cannot even protect the cow how will you protect the human being? Cow-protection now becomes the test of one's humanity! This seems like a dangerous position as though the only way to be truly human is to be a Hindu who protects cows.

If not for humanity cow must be protected for the sake of the country. 'Hind Swaraj': "the only method I know of protecting the cow is that I should approach my Mohammedan brother and urge him for the sake of the country to join me in protecting her. If he should not listen to me, I should let the cow go for the simple reason that the matter is beyond my ability. If I were overfull of pity for the cow, I should sacrifice my life to save her, but not take my brother's. This, I hold, is the law of the religion."

Gandhi finds it totally legitimate to "approach my Mohammedan brother and urge him for the sake of the country to join me in protecting her". He crosses all limits of moral self-righteousness in declaring that a Hindu should be willing to give up his own life but not take 'my brother's life'. This valorises the Hindus' generosity of wanting to give his own life to save the cow, all because the brother cannot be inconvenienced! The moral burden on the non-Hindus is simply too much. That Gandhi brings the cow-protection creed to the dramatic point of having to chose between one's own life versus the brother's life itself shows how much he has fetishised it.

At one point, however, Gandhi does stop the cow-slaughter phraseology and takes up the 'food habit' dimension. In a section 'freedom of food', he refers to 'beef-eating' and points out that "beef is not their (Muslims') ordinary food. Their ordinary food is the same as that of the millions. What is true is that there are very few Muslims who are vegetarians from religious motive. Therefore, they will take meat, including beef, when they can get it. But during the greater part of the years, millions of Muslims, owing to poverty, go without meat of any kind."

But in the next para he is back to cow-slaughter: "Fullest recognition of freedom to the Muslims to slaughter cows is indispensable of communal harmony, and is the only way of saving cow." This means: Allowing Muslims to slaughter cows is the best way to saving the cow! Communal harmony must be bought at the price of allowing Muslims to engage in cow-slaughter — and that will create conditions for the cow to actually not be slaughtered since then with communal harmony Muslims themselves out of their own wish might not want to do cow-slaughter. This is Gandhi's method of immanence at its best, where he wants the actual 'sacralised' internal processes in society to work themselves out rather than impose an abstract 'solution' like the law from above.

I have no political quarrel with this approach but with the way it seems inseparable in Gandhi from accepting cow-protection to be a core tenet for the Hindus.

It is Ambedkar who tears this apart by pointing out the simple fact that Hindus always ate cow. Suddenly we know that Gandhi was just defending a particularly vicious form of latter-day Hinduism which stood for the ossified caste order. Ambedkar's position would totally undercut Gandhi's plea for cow protection as a key tenet of Hinduism. He could displace this framing of beef-eating as a negative 'slaughter' or 'hatya'.

However in most of Indian political, cultural and social life this displacement did not take place. What we have is this unreconstructed social order with the Brahminical cow in the middle of it. Cow-protection has become the test of saintliness and piousness. Honesty in politics too gets measured by it as we saw with Jai Prakash Narayan and Vinoba Bhave who openly declared their demand for a ban on 'cow slaughter'. Morarji Desai did the same. The list can go on.

Today, with the Dadri lynching and the beef-politics turn which Bihar has taken overnight, it is time for some deeper reflection. The rot is deeper than Sangh Parivar and its affiliates.

Gandhi defends religious difference and the right of the Muslim to cow-slaughter. But it is done in a way which internally produces conditions for religious animosity, which morally degrades beef-eaters. In effect, Gandhi is calling on Hindus to defend a morally degrading act. Now this is fertile territory for the Hindu fanatic to give it a twist and suddenly you have bigotry around the cow.